Armchair Adventurer: Exploring Istanbul in A Strangeness in My Mind 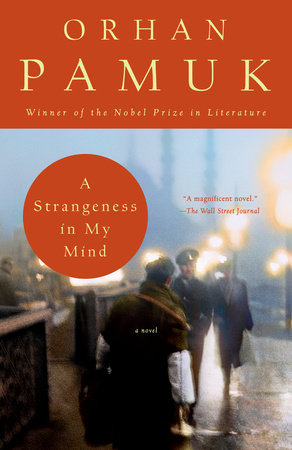 “In a city, you can be alone in a crowd, and in fact what makes the city a city is that it lets you hide the strangeness in your mind inside its teeming multitudes.” —from A Strangeness in My Mind by Orhan Pamuk

In his latest novel, A Strangeness in My Mind, Nobel Prize winner Orhan Pamuk explores Istanbul through the life of Mevlut Karataş, a street vendor who watches as the old city he came to as a young boy transforms into a modern metropolis. Told varyingly in first-person accounts, many of which are by Melvut’s extended family and friends, and the third-person story of Melvut, A Strangeness in My Mind is an insightful and engaging look at fifty years of life in Turkey’s largest city. Inspired by the vibrant urban center portrayed in the novel, this edition of Armchair Adventurer will explore the wonders of Istanbul.

Originally founded more than 2,600 years ago, Istanbul has a rich history. By turns known as Byzantium and Constantinople, the city served as the capital for the Roman, Latin, and Ottoman empires and is still considered the cultural capital of Turkey. 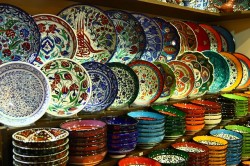 No trip to Istanbul would be complete without a stop in the Grand Bazaar. It is one of the oldest and largest covered markets in the world and is often referred to as one of the first shopping malls. Browse the stalls for jewelry, furniture, clothing, leather goods, carpets, and more. But don’t forget to get to the market early! Hundreds of thousands of people visit the Grand Bazaar each day. 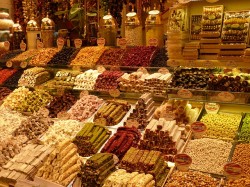 When you’ve had enough of the Grand Bazaar, take a short walk to the Spice Bazaar, or Egyptian Market, to feast your eyes on a vast array of vividly colored spices. You’ll also want to pick up a pound (or two or three!) of the jewel-like confectionery Turkish delight. 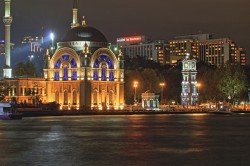 Finally, end your day with a boat ride along the Bosphorus. This strait serves as part of the border between Asia and Europe and is a critically important waterway. It is lined by hundreds of Ottoman-era waterfront houses and palaces. The photo above shows Dolmabahçe Palace, which served as the administrative headquarters for the government of the late Ottoman Empire. The palace can now be explored through guided tours.

Did you enjoy this brief look at Istanbul? Explore more of this amazing city in Orhan Pamuk’s A Strangeness in My Mind, now available in paperback.