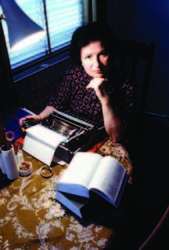 WHAT: THE MISTLETOE MURDER
and Other Stories

WHERE: The author lived in London until her death in 2014.

WHY: “A kind of after-dinner chocolate
left on the pillows of the late mystery master’s fans.
“As Val McDermid notes in her insightful foreword, P.D. James often employed the conventions of the cozy, but she was ‘anything but cozy,’ wittily subverting those conventions to tell much darker tales. That is certainly true in these four spot-on stories, two of which star James’ much-loved series hero, Adam Dalgliesh, at earlier stages of his career. Dalgliesh himself describes one of the plots, that of ‘The Twelve Clues of Christmas,’ as being ‘pure Agatha Christie,’ and so it is, except for the brutality of the murder itself.
“Perhaps the jewel in this very small but sparkling crown is the other Dalgliesh story, ‘The Boxdale Inheritance,’ in which, as often happens in James’ novels, Dalgliesh has little trouble identifying the murderer but acts out of concern for the individuals involved rather than from any rigid sense of justice. McDermid sums up the collection perfectly: ‘These stories are a delicious gift to us at a time when we thought we would read no more of P. D. James’ work.'” —Bill Ott, BOOKLIST

“This collection shows that P.D. James
was just as adept at the short form as she was at novel length.
They efficiently introduce characters and create atmosphere, while posing fair challenges to readers eager to match wits with her.” —PUBLISHERS WEEKLY 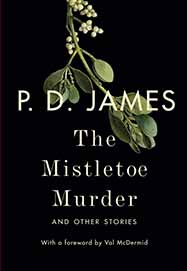 From the beginning of the book:
One of the minor hazards of being a bestselling crime novelist is the ubiquitous question, “And have you ever been personally involved with a real-life murder investigation?”; a question occasionally asked with a look and tone which suggest that the Murder Squad of the Metropolitan Police might with advantage dig up my back garden…