Media Center: ‘One Inside’ by Sam Shepard 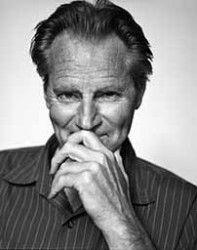 WHAT: THE ONE INSIDE, a new work of fiction

WHERE: The story is set in the American Southwest

WHY: “A ravishing tale of deep-dark cosmic humor, complex tragedy, and self-inflicted exile.
“In the newest work of fiction by celebrated playwright, actor, and writer Sam Shepard, a writer and actor on in years looks back at his life, while negotiating an increasingly volatile relationship with a much younger woman.
“The nameless narrator refers to his tormentor as the Blackmail Girl because she claims to have recorded and transcribed their phone conversations with the intention of publishing them. They clash in taunting and seductive encounters rife with lacerating dialogue that alternate with bruising scenes from his hardscrabble boyhood, when he became infatuated with voluptuous teen Felicity, who was having a scandalous affair with his father.
“In a slowly cohering jigsaw puzzle of flashbacks and jump cuts, memories and dreams, Shepard’s piercingly observant and lonely narrator broods over the mysteries of sexual enthrallment, age’s assaults, and the abrupt demise of his 30-year marriage in finely etched vignettes capturing the poignant moods of wind, sky, the open road, birds, dogs, and coyotes; high drama in a Denny’s; absurdities on a film set; and hallucinatory visions of his dead father’s corpse shrunken to doll-size.
“Shepard is a master of conflicting emotions and haunting regrets, and — graced with a foreword by Patti Smith — interest in this hotly anticipated and provocative work will be avid.” —Donna Seaman, in a starred review for BOOKLIST

“Striking and memorable…
illustrative of what makes Shepard’s work so arresting on the screen and the page.”
—PUBLISHERS WEEKLY

“Atmospheric and precisely observed…
very much a piece with Shepard’s other work.” —KIRKUS 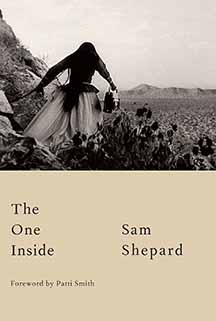 From the beginning of the book:
They’ve murdered something far off. Fighting over it. Yes. Screaming. Doing their mad cackle as they tear into its softness. He’s awake — 5:05 a.m. Pitch black. Distant coyotes. Must’ve been. He’s awake, in any case. Staring at rafters. Adjusting to “place.” Awake, even after the full Xanax, in anticipation of small demons — horses with human heads. All small, as though life-size were too big to fathom. His dogs are on the muscle, howling from the kitchen in feral imitation. Vicious cold again. Blue snow biting at the windowsills: glowing in what’s left of the full moon. He throws the blanket back with a bullfighter’s flourish and swings both bony knees out into the raw air. He comes, almost immediately, to a straight-backed sitting position, both hands flat on his thighs. He tries to take in the ever-changing landscape of his body — where he resides? Which part? He peers down at his very thick, blue, thermal hiking socks, pilfered from some movie set. Piece of some costume — some character, long forgotten. They’ve come and gone, these characters, like brief, violent love affairs: trailers — honey wagons — morning burritos — craft service tents — phony limousines — hot towels — 4 a.m. calls. Forty-some years of it. Too big. Hard to believe. Too vast. How did I get in here? His aluminum trailer rocks and sways in the howling Chinooks. His young face staring back at him through a cheap 4 x 4 mirror, surrounded by bare light bulbs. Outside, they’re shooting film of grasshoppers, falling in great swirling cones from the belly of a rented helicopter. They actually are. In the background — winter wheat, as big around as your thumb, blows in rolling waves.