The Family History Behind Peter Behrens’s Carry Me 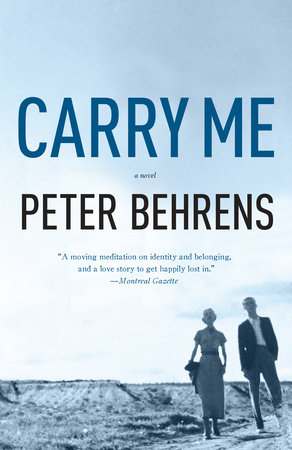 Described as “staggeringly epic” by the Toronto Star, Peter Behrens’ latest novel Carry Me is based on a true story—one that remains very close to the author’s heart. A brilliant reimagining of Behrens’s father’s real-life experiences before and during World War II, Carry Me follows Billy Lange and Karin Weinbrenner from their childhood on the sun-struck Isle of Wight before the First World War, through their coming of age in Frankfurt and Berlin, and, finally, to the beginning of their high-stakes love affair in a Germany collapsing into the Hitler era.

Given the personal nature of the story, we asked Peter Behrens to tell us a bit more about what made him choose to immortalize his family history in this way. We know you and your reading group will enjoy this touching glimpse into the author’s final moments with his father—an experience that would later inspire the author to embark upon this incredible literary journey.

Carry Me & Get Me Out of Here

The novel is of course a fiction but it is also significantly my father’s story. What started the process of transforming an uncollected, scattered, insignificant family history into a novel—what lit the fuse—was a scene that occurred on the day my father was dying, in Montreal, in 1988.

He was moving in and out of a coma, very near the end of his life. I was with him in the hospital room. And every few minutes he would swim back into a sort of consciousness, sit up in bed, and demand that I fetch his suitcase from the closet. Because the last train headed for the Dutch frontier was leaving the Frankfurt Hauptbahnhof, and he had to get to the station quickly and board the train, which would take him safely into Holland before the frontier closed. We had to hurry! Hurry!

I knew the dream, the hallucination, the nightmare, was welling up from his own displaced history. In the summer of 1939 he’d gone back to Germany to persuade his Catholic, hopelessly cosmopolitan, anti-Nazi parents to leave the country before war trapped them. He was unable to persuade them—my grandfather knew if he went to England or Canada he’d be interned as an enemy alien, which was what had happened in 1914. But my father had a British/Canadian passport. After a warning telegram from the British consul, he jumped aboard the last train leaving Frankfurt before the declaration of war, and made it across the border to Rotterdam.

That scene in his hospital room fifty years later didn’t make it into the novel, but what it suggested to me—his fear, vulnerability, the iron weight of history, the obsession with borders and boundaries, and notions of safety—burned into me like a piece of live coal, and the novel grew out of that scorching.