All Things Cease to Appear: A Murder Mystery That Will Keep You Guessing 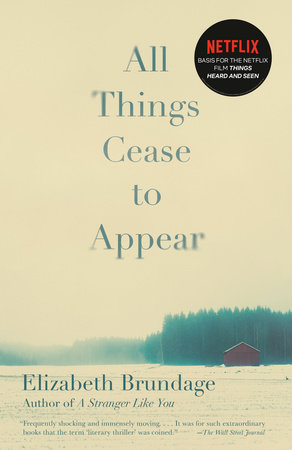 Elizabeth Brundage’s latest novel All Things Cease to Appear is a dark, riveting thriller about two families mired in their own unhappiness and the gruesome murder that binds them together. As the book opens George Clare returns home to his family’s new farmstead in Chosen, New York, to find his wife murdered in their bed and their three-year-old daughter playing across the hall. The local police are faced with identifying her killer—quite a challenge given the lack of evidence and the many potential suspects at hand.

Combining noir with the gothic, All Things Cease to Appear is a complex portrait of a marriage and a shrewd observation of the darkest aspects of people’s characters. Below, we’ve included introductions to just a few of the suspicious personalities at the heart of this thrilling whodunit.

In any murder investigation the people closest to the victim are likely to come under suspicion. As Catherine’s husband, George Clare is the prime suspect in her death. It certainly doesn’t help his case that their marriage wasn’t a happy one. Their incompatibility was clear to those who took the time to notice:

The husband took her elbow, a bit roughly, Mary observed, and his wife smiled in that way of hers, the sudden brightening of a child who has been reprimanded and then surprised by consolation, and he looked at her sideways, a fierce, enigmatic grin, and it seemed to signify their fate. Long after they were gone, she would reflect on this single moment; it would keep her up nights. (p. 103)

A lack of warm feeling, however, does not necessarily a murderer make. Let us move on to the next suspect.

As the eldest son of Ella and Cal Hale, the original owners of the farm who lost their land to bankruptcy, Eddy has many reasons to harbor darkness and resentment:

[Eddy] took after their father, ornery and skeptical, but also had their mother’s patience. Like all of the Hales, he was tall and had blue eyes, though Eddy’s were meaner and the girls liked that. In his dark farm clothes he offered them a dare. They thought they could save him. (p. 48)

An aspiring musician, Eddy’s dreams for his future are viciously quashed by his father, fueling his fear of never escaping Chosen. When he meets Catherine he is immediately taken with the young, vibrant mother from the city. A young man with an edge—bitter about the loss of his family farm and desperate to leave a dead-end town behind him—he seems like a murder suspect to us!

Catherine Clare wasn’t the only victim of a man’s disregard. Ella Hale, the matriarch of the Hale clan, struggled to make a life for her family in the face of her husband’s drunken neglect and unfaithfulness. When their farm went broke, she and her husband took what some might call the easy way out, leaving their sons in their uncle’s care. But Ella never fully left the farm, joining the ranks of those who came before her:

Always the farm sings for us, its lost families, its soldiers and wives. . . . [There] have been many. . .who have stripped and pillaged. Even the copper pipes, the delft tiles. Whatever they could, they took. Leaving just the walls, the bare floors. The beating heart in the cellar.

We wait. We are patient. We wait for news. We wait to be told. The wind is trying to tell us. The trees shift. It is the end of something; we can sense it. Soon we will know. (p. 3)

Could Catherine’s death have somehow been brought about by supernatural forces tied to the farm? Read All Things Cease to Appear with your book club to find out!