Jane Mendelsohn on Writing and Current Events: An Exclusive Q&A 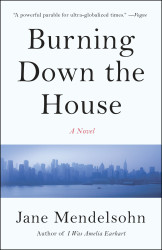 Jane Mendelsohn’s latest novel, Burning Down the House, is a riveting and dramatic story of two women whose lives collide in unexpected ways. Neva is a young woman who escaped sexual slavery to become a nanny for Jonathan, the son of Steve Zane, a wealthy real estate titan in New York City. Poppy, the seventeen-year-old daughter of the Zane family, is coming of age and experiencing her first love affair. As the novel progresses, the women’s fates intertwine as the Zane dynasty begins its slide from greatness. Through Mendelsohn’s dazzling prose and acute observations, Burning Down the House explores topics as far-reaching and timely as globalization, human trafficking, wealth inequality, and sexual violence. In celebration of the paperback publication of the novel, we asked Mendelsohn some questions about her writing process, her love of New York City, and the novel’s deep relevance to current national events.

Reading Group Center: What is the most common question you’ve gotten from readers about Burning Down the House?

Jane Mendelsohn: The most common question I’m asked is, “Were you thinking about Donald Trump when you wrote the novel?” The answer is, No, I finished the book in 2014, when Donald Trump was not as prominent a figure in public life. However, because the novel concerns an NYC real estate dynasty with a powerful patriarch—Steven Zane—the comparison is understandable.

I certainly was thinking about globalization, international real estate, and the financial crisis and how these issues intersect with everyday life. I was thinking about the state of the world, which felt more uncertain and disconnected than I had ever experienced. I sensed a raw feeling of impending disorder. I was trying to write a story in which the reader might take a journey through a plot that embodied this sense of chaos and find at the end a kind of strength in uncertainty.

RGC: Burning Down the House deals with themes like wealth, power, and violence against women, all things that have been hotly debated recently. How do you see your novel in conversation with current events?

JM: I believe one of the reasons we tell stories is to explore and confront our fears. My hope is that this novel allows the reader to experience some of the darker aspects of the world today through a metaphorical journey. And perhaps come up with some personal answers, some ways of thinking about how to live in a time of disruption.

We are living in a time of cataclysmic change. Globalization and other forces have led to extremes of wealth and power, and extremes of poverty and powerlessness. Violence against women exists against the backdrop of this upheaval and human trafficking is a real problem, largely unseen. It exists right here in New York City, in the midst of so much wealth and power, and I saw that juxtaposition as emblematic of the intersections and disruptions brought about by globalization. I also felt it was worthwhile to highlight the very real issue of sex trafficking existing amidst the glamour and privilege of life in New York.

The plot takes a woman, a victim of human trafficking, from one end of the spectrum, and places her in a world of extraordinary privilege. This is a heightened example of what is happening in the world today. The book is meant to be a parable about the globalized world. How do we survive the upheaval, the chaos and uncertainty? Do we need to rely on conventional forms of power? As the world becomes more complex, there is a yearning for simplicity, security, and certainty. But what if we can’t readily or humanely find those things? Can we find strength in uncertainty?

RGC: Burning Down the House follows in a long-standing tradition of great fiction depicting the lives of New Yorkers. Why do you think there is such a wealth of New York–based fiction? What are some of your favorite New York novels and why?

JM: I’m a native New Yorker and I love this city as if it were a member of my family, so my first answer to this question would naturally be: Because New York is the greatest city in the world! But more thoughtfully, I’d say, so much fiction explores life in New York because New York offers pure promise, and the collision between people’s soaring dreams and the dirty, uncompromising reality of the city creates the conditions for classic drama.

What also inspires literary exploration is that New York is a city of immense contradictions—a ravishing sunset at the end of a filthy street; extreme social inequality within the space of one block; a grand, sometimes comical importance attached to mundane activities. These contradictions fascinate me every day.

Also: I’m very moved by the ugliness of New York—it never seems too pretty. Even at its most seductive or pretentious it just isn’t tailored like London or consistently beautiful like Paris and so it can never get away with seeming perfect. Underneath New York’s grandeur there’s the chaos that everyone sees, but within that chaos there’s an awkward uncertainty that everyone feels, and that’s very human.

Some of my favorite NYC novels:

The Age of Innocence by Edith Wharton is remarkable for its astute and tragic portrait of nineteenth century New York, which is not that different from parts of the city today. The novel also captures the small-town quality New York possesses for those born here. (I can attest to this— my husband is also a native New Yorker, and after we got engaged we discovered we’d been delivered by the same obstetrician.)

Ragtime by E.L. Doctorow is a masterful, exuberant novel intertwining three families as well as real historical figures. The writing is thrillingly good and the narrative moves with a pulse that captures the energy of New York. But what I love most is the sensibility of the book—it has a wry generosity that feels like a true New Yorker’s point of view.

Another NYC book I love is not actually a novel but reads like one: Patti Smith’s Just Kids. It’s a memoir of her friendship with Robert Mapplethorpe. I grew up in New York in the 70s and Just Kids is the only book I’ve ever read that captures what the city felt like in those years—the poetry of downtown and the spaciousness of being on the streets in those days. It’s a beautiful book about being young, being an artist and finding your way—or not—in New York City, and it treats the city as an almost sacred place for making art and living the life of an artist, which it can be.

RGC: The novel takes inspiration from Greek tragedies. How did that influence your plot and your characters?

JM: Greek tragedies take universal emotional states and personify them and give them plots. Our emotions are enormous, we may carry them inside us but they are galactic in their influence on our lives and the Greek tragedians knew this. This intensity seemed appropriate to the story I was telling because Burning Down the House is an attempt to explore a feeling of life today—uncertain, disconnected, chaotic, emotionally explosive—turned into an extreme story about a larger-than-life family. And it’s a family that experiences a fall, with some parallels to the House of Agamemnon.

The plot of Burning Down the House, as with all of my books, is not straight realism. What I love about Greek tragedy is that the stories are moving and dramatic, and the characters are believably human in that their emotional responses to the events feel real and honest, but of course the tales are not read as realism. We are not meant to believe, literally, in the story of Oedipus for instance—but the feelings that the story engenders in readers are real, the psychology is insightful, and its ideas can be applied to our lives.

The Victorian novel was also an influence. I asked myself, What would a Victorian novel look like today? The conflicts and taboos that set those plots in motion—adultery, illegitimate children—these things would not create the same crises today. So I thought about the more intense situations that could set a family into crisis today and explored those—collisions with reproductive technology, with human trafficking, with global crime.

RGC: Where is your favorite place to write? Has it changed over the years?

JM: Since having children, I can write just about anywhere. When I was younger I needed peace and quiet and hours on end to write, but now I can work in a noisy coffee shop. I wrote most of my previous book, American Music, in my head while pushing my daughters on the swings in Washington Square Park. For me, thinking about the story, thinking about the characters and the structure, before I begin writing, is a long part of the process. Once that is done, and I have the book in my mind and have sketched out an outline, I sit down and do the actual writing at my desk in my office at home.

My office has an old couch and a classic New York street view. I face a tree and a white brick building and a garage. It’s very plain and endlessly interesting at the same time, which I love. Now that my daughters are older, the work still revolves around their schedules, but the days of pushing swings are in the past.

RGC: What can readers look for next from Jane Mendelsohn?

JM: I’m currently working on a musical adaptation of my novel American Music for the American Repertory Theater at Harvard. My collaborators are fantastic and it’s been exciting to think about a whole new form of storytelling. I’m writing the book of the show and the lyrics. I started out writing poetry and because songs are essentially poems; it’s been a return, in a way, to a place where I began. I enjoy figuring out the logic and argument and architecture of each song, the voice of the character who’s singing it, what it needs to say within the story. Working with the composer as well as with the director and the rest of the creative team has been thrilling.

And I’m at work on another novel. I’m not ready to talk about it yet, but I hope to be able to share more soon.