5 Fascinating Things We Learned from Reading the Annotated Mansfield Park 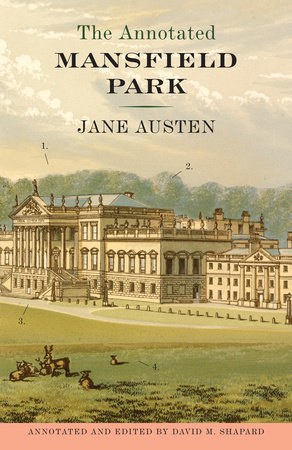 Jane Austen is a favorite author here at the Reading Group Center, regardless of whether we’ve been swooning for Mr. Darcy since we were sixteen or have fallen in love with him as an adult.  Reading the Austen oeuvre is interesting and entertaining on its own, but we’ve found that reading an edition annotated by the brilliant David M. Shapard is an even richer experience. Shapard has been creating annotated editions for the past few years and Mansfield Park is the final Austen novel to be augmented by his research. Ranging from the historical to the personal, these footnotes taught us a whole host of new things we hadn’t known before. We chose five of our favorites to share with you.

1. There were actually two editions of Mansfield Park published while Austen was still living. The second included Austen’s own edits and corrections, no editor needed!

“Two editions of Mansfield Park appeared during Jane Austen’s lifetime: the first in 1814 and the second in 1816. A letter of hers to her publisher (dated December 11, 1815) indicates that she herself made corrections to the second edition.

2. “Traveling post” doesn’t mean to travel through the postal service. It means traveling in the fanciest of ways, with horses who were always ready for the next leg of the journey. And, for Austen’s refined characters, it was the only way to go.

“Traveling post is the standard means of long-distance travel in Austen’s novels. It involved using a private carriage, either one’s own or a rented one, and horses that were hired at posting stations, generally local inns, that existed approximately every ten miles along main routes. The horses would proceed at full gallop for this distance and then, upon arrival at the next station, be changed for a set of fresh horses that would gallop quickly for another ten miles. The system was very well developed by this time; inns had ample sup­plies of horses and were able to change those on incoming carriages very quickly, so travelers could proceed with no need to stop except for food or rest. Public coaches, plying the same routes and changing horses in the same man­ner, also existed, but their lower status and lesser privacy made genteel people avoid them.”

3. A “mobcap” isn’t something worn by mobster’s wives. It’s a bonnet. More specifically an indoor bonnet. We also learned that there are differences between public and private bonnets.

“A mobcap is a soft cloth hat or bonnet normally worn by women when inside, or underneath a regular hat when going outside. It would often be worn by an older woman, since it was simple and practical and protected the hair (almost all women wore caps for this purpose), but did not look as fashionable and attractive as a regular hat.”

4. Austen loved reading George Crabbe’s stories so much she made Fanny read them too (“And here are Crabbe’s Tales, and the Idler, at hand to relieve you, if you tire of your great book.”). And she recognized the importance of a good book, having Edmund take his leave of Fanny when he realizes she is reading (“And now, dear Fanny, I will not inter­rupt you any longer. You want to be reading”).

“Austen was a great lover of [Crabbe’s] work; she may even have taken the name Fanny Price from a character in his Parish Register of 1807. Her nephew James Edward Austen-Leigh and her niece Caroline Austen, in their mem­oirs of Jane Austen, both mention her love of Crabbe, which her nephew says was ‘perhaps on account of a certain resemblance to herself in minute and highly finished detail.’ He adds that she ‘would sometimes say, in jest, that, if she ever married at all, she could fancy being Mrs. Crabbe,’ while her niece writes that her admiration of the poet made her take ‘a keen interest in finding out who he was.’”

5. Austen was a badass feminist before it was in vogue, representing women in all of their complicated and human ways.

“Jane Austen consistently tries to avoid idealizing her heroines. In a letter regarding the wish for ideal heroines in novels, a common phenom­enon then, she declares, ‘pictures of perfection as you know make me sick & wicked’ (March 23, 1817).”