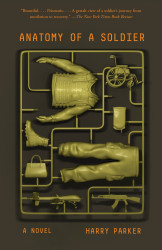 Harry Parker is a writer and a veteran who served as a soldier in the British army in Iraq in 2007 and in Afghanistan in 2009. Out of his experiences in combat came Anatomy of a Soldier, a stunningly unique debut novel about what it truly means to be at war. Its cast of characters—soldiers, family members, and civilians—are described not by a traditional narrator but by the objects surrounding them. Imagine a novel from the perspective of a badge made in China, a beer glass, and an Improvised Explosive Device. Parker’s powerhouse of a novel, written in a new and wholly modern way is destined to find its place in the canon of the best war books of the twenty-first century.

We asked Harry if he would share with us some of the books about war that have informed him as both a writer and a soldier. From Vietnam to the Spanish Civil War, these books examine war through the ages, through fiction and nonfiction, the harrowing and the mundane.

Platoon Leader: A Memoir of Command in Combat by James R. McDonough (1985)

Before my unit deployed to Afghanistan, a colonel was pressing this book on junior commanders. We’d all been reading the operational manuals, trying to understand what the country would be like, the local culture, tribal dynamics, and history. In a way this book was more useful than any of that. Although Vietnam was a very different conflict, so many of the challenges facing McDonough seemed to be similar to ours. Particularly the difficulties of soldiering in a small patrol base amongst the local population. But it’s also an interesting account of leadership under pressure.

For Whom the Bell Tolls by Ernest Hemingway (1940)

I picked this up when I started trying to write seriously. I thought I had better find out how it was done. I found it hard going to start but it is now one of my favorite books and one of the only books I’ve read multiple times. All the characters were so real. Pilar especially sticks with me. The loneliness of Robert Jordan reminded me of how I felt at war. The passages of combat are some of the most compelling I’ve read. And, of course, you can smell the landscape.

This book has stayed with me like no other. It’s a haunting read about dying and how we reckon with ourselves at the end. The opening of the novel is one of my favorite passages; the writing breathlessly describes our hero drowning in the Atlantic after his ship has been torpedoed. He washes up on a rock in the middle of the ocean and the book follows his struggle to survive. It’s hard to root for the hero at times. Flashbacks tell us he is not a nice character, but this makes his struggle on the small rock all the more interesting. The last sentence completely turns the book on its head.

When done well, science fiction seems to be a place where the ideas and issues that concern us today can be explored. The dedication for this book reads “For the Gulf War Veterans.” Look to Windward is a space opera with all sorts of fantastical alien creatures and worlds that make me marvel at Banks’s imagination. Although perhaps not your conventional war story, the book explores the fallout of one civilization meddling in the affairs of another and the moral consequences.

Birdsong became a set text when I was at school. Everyone seems to have read it in the UK. I never knew my relatives who fought in the First World War; I suppose with time, collective understanding of what it was truly like is fading. This novel brings to life the horrors of the First World War. There are incredible descriptions of the first day of the Somme and the bravery of the soldiers who tunnelled under the trenches. I was fifteen when I first read it and I remember crying. I’d never cried reading before and I realized the power of stories in that moment.