Armchair Adventure: A Trip to the Borderlands in Wintering 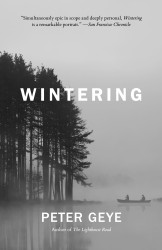 Peter Geye’s latest novel, Wintering, is a literary thriller, a dreamily remembered adventure tale, a story of father-son bonding, and a beautiful rumination on the natural world. Geye deftly weaves together two stories of escape into the wilderness: one that happened in 1963 and one that’s just happened at the outset of the novel. Gus’s elderly and demented father, Harry, has disappeared into the woods of Gunflint, Minnesota. As Gus deals with his missing father, he relates the tale of the first time his father vanished into the woods while on an adventure with Gus, when Gus was eighteen. Gus’s tale is harrowing and almost unbelievable, involving bears, waterfalls, and canoeing in icy water.

Despite the obstacles Gus and Harry face, something about the cold wilds of upper Minnesota in the wintertime holds a specific kind of magic. We’re not suggesting that you pull out your hiking boots and blaze a trail into the unforgiving wilds, but it’s worth a visit through the pages of this captivating novel. Taking his place among great wilderness writers such as Jack London, William Faulkner and Cormac McCarthy, Peter Geye is a literary force as strong as a wintry gale.

We’ve chosen some of the most beautiful passages in the book to share with you: those that capture the rugged spirit and beauty of the Midwest.

On the stunning beauty of the aurora borealis:

“Their fire had died and his teeth were chattering, and when he stepped out of the tent to restoke the flames, he saw the pines on the opposite shore backlit by their own celestial fires: the aurora borealis, shimmering orange and red across the starlit heavens.” (pg 86)

On man’s disruption of the natural landscape:

“It was then that he saw it: a shack sitting on a knoll among blueberry bushes and deadfall. He cocked his head and rubbed his eyes and looked again. The shack was still there. Cracked windows hung on either side of a door falling from its rusted hinges. A roof of wooden shingles cloaked in moss, two steps smothered in ferns. The river-rock foundation was held together by ancient mortar, the chimney fashioned out of the same materials.” (pg 93)

On the beauty of a fresh snowfall:

“When it wasn’t snowing, the north wind blew the fallen flakes up in waves, and before long the bay was clear, the ice mirroring the dull sky, and it seemed impossible the world could be so colorless. It took night and the coming of stars to shed any brightness on their lives, and the few nights the clouds parted they stood together on the shore as though it were a Mexican beach and they were tanning their cold faces, staring silently up into the sky.” (pg 54)

On the ghostly nature of the forest:

“The first of those mornings they canoed across a shallow lake and found a stand of spruce. The trees were draped with old-man’s beard that hung white, covered with the morning’s frost. Gus passed beneath them thinking that ghosts guarded the world, and he felt all the safer for it.” (pg 84)