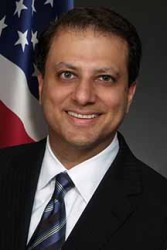 Preet Bharara, the former U.S. Attorney for the Southern District of New York, is writing a book about the search for justice — not just in criminal cases but in life and society in general. The as-yet-untitled book will be published by Alfred A. Knopf in early 2019. The announcement was made today by Sonny Mehta, Chairman and Editor in Chief of Alfred A. Knopf, who acquired North American rights (including ebook and audio) from Elyse Cheney Associates, with Editor-at-Large Peter Gethers acting as editor. The terms of the deal are not being disclosed.

“The law is merely an instrument, and without the involvement of human hands, it is as lifeless and uninspiring as a violin kept in its case,” said Bharara. “People will regard a result as just if they regard the process leading to it as fair and if they believe the people responsible for it are fair-minded. That is the process I want to illuminate in this book.”

“Never has the fair administration of justice felt more urgent in America, and Preet Bharara is ideally suited to explain both what that means and how to achieve it,” said Gethers. “As one who has spent his life in search of truth and justice, Preet possesses insight and wisdom that has been hard-won. His book, using case studies and analysis, will prove to be an essential compass for all Americans, with application beyond the law, from colleges to corporate boardrooms, for students and parents, and for citizens everywhere.”

“Preet Bharara’s life experience, coupled with his standing as a U.S. Attorney and the cases he tried as prosecutor, makes him uniquely qualified to write this book,” said Mehta. “His will be an essential primer on justice for all Americans.”

Bharara asserts, “The approach I lay out applies not only to how federal laws are interpreted and enforced in courts around the country; it also informs how mature, thinking people make decisions in their communities, their workplaces, and their homes. This is not a book just about the law. It is a book about integrity, leadership, decision making, and moral reasoning. It addresses what it means to do the right thing, how to avoid doing the wrong thing, and the role of thoughtfulness in making the best choice.”

Preet Bharara is an American lawyer who served as U.S. Attorney for the Southern District of New York from 2009 to 2017. He was nominated to the position on May 15, 2009 by President Barack Obama. As U.S. Attorney, Bharara oversaw the investigation and litigation of all criminal and civil cases brought on behalf of the United States in the Southern District of New York, supervising an office of more than two hundred Assistant U.S. Attorneys. On April 1, 2017, Bharara joined the NYU School of Law faculty as a Distinguished Scholar in Residence. Prior to becoming the U.S. Attorney, Bharara served as Chief Counsel and Staff Director of the U.S. Senate Judiciary Committee’s Subcommittee on Administrative Oversight and the Courts. During his tenure, he helped to lead the Senate Judiciary Committee investigation of the firing of U.S. Attorneys. From 2000 to 2005, Bharara served as an Assistant U.S. Attorney in the Southern District of New York, where he prosecuted a wide range of cases involving organized crime, racketeering, securities fraud, money laundering, narcotics trafficking, and other crimes. Bharara was a litigation associate at Swidler Berlin Shereff Friedman in New York from 1996 to 2000 and at Gibson, Dunn & Crutcher from 1993 to 1996. He graduated magna cum laude from Harvard College with an A.B. in Government in 1990, and from Columbia Law School with a J.D. in 1993, where he was a member of the Columbia Law Review.