Suggested Further Reading for The Tragedy of Brady Sims 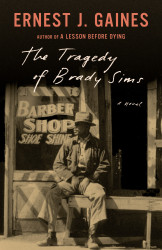 In his first work of fiction in more than a decade, National Book Critics Circle Award–winning author Ernest J. Gaines tells the story of a small Louisiana town struggling with the effects of Jim Crow and the Great Migration. In The Tragedy of Brady Sims, the title character goes to extremes in a desperate attempt to keep the youth of his town out of Angola, Louisiana’s notoriously harsh state penitentiary. Those who leave Bayonne, whether to the north or to prison, either don’t come back or, if they do, they are forever changed. The story Gaines crafts about life in this town is not to be missed—“a taut and searing tale about race and small-town justice” (Booklist).

For more background on the setting and themes of  The Tragedy of Brady Sims, we at the Reading Group Center suggest reading the following books alongside the novella:

In the Place of Justice by Wilbert Rideau

Brady Sims would do anything to keep his community out of Angola. Learn more about the fate of those who ended up there by reading In the Place of Justice. In a true account that has eerie parallels to The Tragedy of Brady Sims, Wilbert Rideau details his life in Angola after killing a bank teller, his struggle to redeem himself, and his mission to expose and reform Louisiana’s justice system.

During the Great Migration (1916 to 1970), many Southern towns, like the fictional Bayonne, saw their populations dwindle as more than six million people moved north and west. The Tragedy of Brady Sims recounts what happened to those who stayed behind, but you can learn about those who left in Isabel Wilkerson’s epic masterwork and National Book Critics Circle Award winner, The Warmth of Other Suns.

In Ayana Mathis’s novel The Twelve Tribes of Hattie selected for Oprah’s Book Club 2.0, Hattie Shepherd flees her home in Georgia to head north as part of the Great Migration. Life in Philadelphia is not as easy as she had hoped, and she struggles through a disappointing marriage, crippling poverty, and the loss of twins. Hattie eventually has nine children, but she is not a gentle, tender mother. Like Brady Sims, she knows that the world will not be kind and that it is up to her to prepare the next generation for this harsh reality.