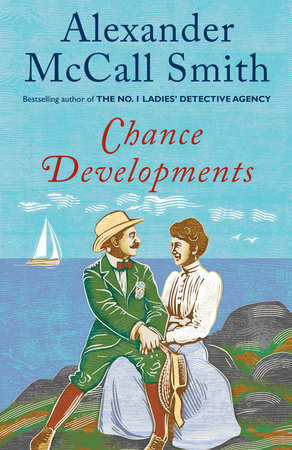 Alexander McCall Smith has a real knack for capturing all of the best aspects of humanity. Love and friendship, kindness and joy, forgiveness and loyalty—these are just a few of the themes that he has explored in his impressively vast collection of work. In Chance Developments, McCall Smith’s most recent book of short stories, the author delivers the same brand of charming and poignant tales that we’ve come to expect from him over the years. Inspired by a series of old photographs, each story captures the surprising intersections of love and friendship that alter life’s journeys every day.

As a tribute to the power of human connection that is expressed so delightfully in Chance Developments, we reached out to you, our wonderful Reading Group Center community, and asked you to share your own meet-cute stories. For those of you who may be unfamiliar with the term, meet-cutes are the very first meeting between eventual romantic partners. And while there can be all kinds of chance encounters, we chose to celebrate those of the romantic variety because, well, who doesn’t love a love story? We included just a few of our favorites below. Thank you so much to those of you who chose to participate—your stories are inspiring!

I met my hubby when he was stationed at JBLM in Washington. Met him on a Friday, he came over for dinner the next night and never left. Here’s our timeline; met in April, proposed in June, and married in October of 1992. Just celebrated our twenty-fifth anniversary.

We met as coworkers at Kmart and I couldn’t stand him. We became friends, eventually started dating, and got married. Now we have two beautiful children and have been married almost thirteen years and together for fifteen. I married my best friend.

We met on an out-of-town trip that the band and pep squad took in high school. High school sweethearts for years, then we married and raised a family together, and now we’re still living our happily ever after.

We met about eight years ago on a dating site. I met him and another guy at the same time, and chose the other guy (HUGE mistake!). That didn’t last. We stayed friends for the next few years, and earlier this year, he asked me out. Saying yes this time is the best decision I ever made.

We met at a surfing spot in the Philippines just last year. He was alone and I was with my two male friends. It started when the owner of the hostel introduced him to us and asked us if we might want to join him with our surfing sessions. We said yes. From then on, he was with us the whole day, eating out beside the beach, going around the area, playing games, surfing the waves, and just having fun. We laughed a lot and talked a lot. The best part we did was the acroyoga. He made me fly literally and figuratively. He was so intelligent and sympathetic. But vacation was over and my friends and I needed to return home. He was left at the hostel. Never thought we would see each other again after that. He texted me and added me on Facebook. We spent two weeks before his return flight to Switzerland. I can say we had the most beautiful connection in the world.

I had just left my job at a grocery store as my now-husband was transferring in. I asked everyone I knew to find out info on him, and he would trail behind me whenever I would go into the store. The day before Thanksgiving my mom and I went into the store to get some last-minute items and he was working in the check-stand. She insisted on using his lane, and as soon as it was our turn, she turned to me and said rather loudly, “You’re right Kim. He does have pretty eyes.” He said by the time he looked up I was gone. Neither of us gathered the courage to say hi for another year.

My husband and I met at a buffet restaurant. We were both on our first day of work and put on the drink line. We flirted a bit. A few days later the place closed, I would swing by his other job every day and order. One day I brought my brothers with me and one of them ate thirteen hamburgers just so I could keep going up to order. I finally gave him my number. We got married five years later and have two kids and an angel baby. We are on our thirteenth year.

I was a student at the University of Edinburgh. Although I’m American, I had been educated in the UK during my teen years. I had ONE American friend at the university and he introduced me to HIS friend, a young man who was taking a year off from law school in Texas. He came to my American History class with me and I fell in love with him as soon as he corrected the professor on the location of the slide he was showing of his US holiday. We’ve been together for forty-three years.