Michael Finkel on Telling Someone Else’s Story in The Stranger in the Woods: An Exclusive Q&A 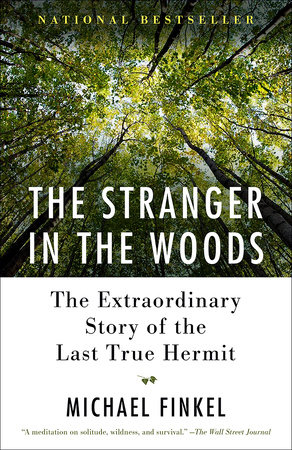 In The Stranger in the Woods Michael Finkel recounts the unforgettable true story of Christopher Knight, who found refuge from the pressures of modern society by living alone in the Maine woods for twenty-seven years. Knight’s story has captured the imaginations of readers all over the world, many of whom cannot imagine a life spent without a smartphone, let alone any human contact whatsoever.

Hailed by critics as “astonishing” (The Atlantic) and “fascinating” (San Francisco Chronicle), The Stranger in the Woods has also been met with its fair share of debate. Some readers have asked if Knight’s story should have been told at all, when he so clearly wished to live anonymously and completely separate from society. Michael Finkel addresses this question and provides more insight into his research process, among other things, in our exclusive Q&A with the author.

Reading Group Center: While The Stranger in the Woods is primarily an exploration of Christopher Knight’s life, it is clear that researching and writing it was a process of self-discovery for you as well. What would you say was the most surprising or significant realization that you had about yourself?

Michael Finkel: Even before I’d heard of Christopher Knight, I spent ten days at a silent retreat in India, so clearly there was a deep curiosity and a strong desire within me to explore solitude and silence. My time spent with Chris Knight, along with all of the research that went into the project (I read dozens of books, covering all facets of aloneness) clearly demonstrated that the idea to seek alone time is extremely healthy for some people. I’m one of those people, and my guess is that there are many of us out there. Most, I believe, do not get nearly enough alone time. This project prompted me to carve out a few chunks of time—sometimes just fifteen minutes a day—in which I do nothing at all except try and have a mini-escape, a momentary hermitage. I’ve found it as refreshing for my head as exercise is for my body.

RGC: The Stranger in the Woods really seems to have struck a chord with readers. What is it about Christopher Knight and his unusual story that you think has resonated with audiences so much?

MF: I think many people have this sense that something about modern society—the screens, the noise, the traffic, the constant busyness—has approached a point where living in the world feels somewhat   unhealthy. The so-called modern conveniences may in fact be extremely inconvenient—everything seems to exist as a distraction from any sort of deeper thought or contemplation. Christopher Knight described the contents of the Internet (he learned about it after his arrest) as “a bunch of candy-colored fluff.” That seems a generally fair description. I believe that Knight’s story offers a type of liberation that a surprisingly high percentage of us think about, but simply can’t achieve—we have jobs and families and responsibilities and connections that can’t be cut. Knight’s story, in a sense, is the ultimate escapist fantasy—and that fact that it’s true makes it so much more intriguing.

RGC: What is your favorite question that you have gotten from readers about the book?

MF: “Wouldn’t this story have been better if it had never been written at all?”

I find this a great question because it’s both illogical and perhaps true at the same time. Christopher Knight planned to stay in the woods his entire life—he was removed by force, not voluntarily. His “perfect” life would mean that no one would ever learn about his life. But of course he was committing crimes, and as he fully admits, he deserved to be arrested. After his arrest, Knight was besieged by journalists—his lawyer estimates that about 500 reporters sought an interview. Knight may have realized that the best way to return to his desired privacy was to tell his story to one person and then allow the ensuing book to speak for him. I am honored and indebted to Chris that he chose to speak with me. And I’m pleased to report that, so far as I know, Knight has indeed been left alone. But the truth remains that the ideal version of Knight’s story would be no story to read at all.

RGC: This is a book that required extensive research and fact-checking. Can you tell us a little more about your writing process? What one piece of advice would you give aspiring authors about telling someone else’s story?

MF: After the majority of my travel and research is completed (for Chris Knight’s story, this took more than a year), and I’m ready to begin the actual writing process, I begin with what I call my “block of granite.” I type into my computer everything that’s in my head about the subject, in a very rough (and sometimes totally random) order, just spilling out all my thoughts and opinions, including cutting and pasting large chunks of interviews and research, just adding every little thing until I feel that I’ve completely emptied my head onto the page.

This feels freeing to me—as if I no longer have to worry about remembering anything, it’s all there on the page. But at the same time, it’s also quite inefficient, but that’s sometimes the way writing works. My block of granite for Stranger was 1,200 single-spaced pages long!

From that block, I cut and shaped and polished, and literally tossed more than 1,000 pages away, and ended with a 191-page book. I don’t know if I can recommend this method to anyone else, but it seems to work for me.

My advice for telling someone else’s story is to try not to consciously bend the story in any particular direction—to listen with an open mind, to include the good with the bad, to attempt to quell one’s biases and allow the person you’re writing about to emerge as wholly as possible, warts and all.

RGC: Imagine you’re part of a book club discussing The Stranger in the Woods. What is one question you would pose to the group and why?

MF: This question seems simple but it has interesting implications: “How do you feel about Christopher Knight?” The answers range widely. Some people feel complete hatred toward Knight—they believe Knight is nothing but a thief and a leech on society, stealing what other people worked hard to buy. Others say that that Knight is a modern-day hero—his rejection of our environment-destroying, crazily consumerist society is an eye-opening call to action. And of course there are dozens of opinions lying between these extremes.

No one is wrong. Knight can feel at times like a cipher, an inscrutable man who provokes wildly discordant opinions. “He really is an object for everyone to project onto,” said Peter Deri, one of the clinical psychologists I interviewed.  Hate him or love him, or somewhere between, how you feel about Knight seems to say more about you than it does about him.