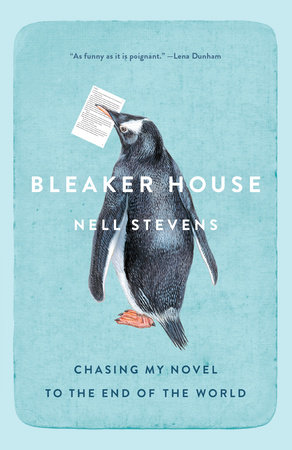 When she was twenty-seven, Nell Stevens—a lifelong aspiring novelist—won an all-expenses paid fellowship to go anywhere in the world to write. Would she choose a glittering metropolis, a romantic village, an exotic paradise? Not exactly. Nell picked Bleaker Island, a snowy, windswept pile of rock in the Falklands. And instead of the novel she planned to write, Nell came out of the experience with a memoir that traces her island days and slowly reveals the life and people she has left behind in pursuit of her writing. Lena Dunham called the book “as funny as it is poignant,” so we knew we needed to chat with the author about this unconventional book.

Reading Group Center: How would you describe Bleaker House in twenty-five words or fewer?

Nell Stevens: It’s a book about the journey of writing: physical, emotional, intellectual, personal. What happens to your life when all you want is to tell stories?

RGC: You went to Bleaker to write a novel and came out of it with a memoir. Was it hard to let the novel go? Did you keep trying to make the novel work after you left the island?

NS: It was demoralizing to realize that the novel I’d been writing, pouring so much hope into and putting so much pressure on, was a failure. I didn’t come to accept that fully until I’d written Bleaker House: In the process writing the memoir, I found a voice that felt authentic and came to me far more naturally than the voice I’d used for the novel. I taught myself how to write all over again in the process of describing my failure to write fiction. I no longer feel demoralized, because Bleaker House, the experience of writing it and the finished book, made the failure of the novel not only tolerable but a great relief: I had been writing a different book all along, I just hadn’t realized it.

RGC: Did you return to writing fiction after you finished writing Bleaker House?

NS: Yes. I’ve been writing short fiction and am currently at work on a novel. I try not to think of fiction and nonfiction as separate categories—this was part of what I was exploring in Bleaker House—so I am interested in applying the lessons I learned while writing and editing my memoir to fiction. That said, writing memoir was such a revelation that I’ve kept that up, too. My next book, The Victorian and the Romantic, is nonfiction: it combines memoir with sections imagining the life of the nineteenth-century writer Elizabeth Gaskell.

RGC: Your grant gave you the option of living anywhere and you chose Bleaker Island. Where was the runner-up?

NS: I wanted to go somewhere that provided good writing conditions—quiet, essentially—but that would also be a good subject for writing in itself: a place where I could write, and a place I could write about. I don’t think the world needs any more novels by English people about many of the countries I’d love to visit and spend time in. What was fascinating to me about the Falkland Islands was the combination of their Englishness and their foreignness. It was a self-identified extension of my homeland, but also a place where I was an outsider. The other destination I considered, for similar reasons, was St Helena: a volcanic tropical island in the South Atlantic Ocean and a British Overseas Territory.

RGC: You faced the “what movie would you bring to an island” question in real life and chose Eat, Pray, Love. Would you make the same choice again?

NS: I always feel the need to clarify that I didn’t mean to take Eat, Pray, Love! It happened to be the only movie I had saved on my laptop. I had assumed, oh-so-naively, that I’d be able to stream and download other films while I was in the Falklands, only to discover on arrival that the internet connection was not up to it. In many ways, though, Eat, Pray, Love turned out to be the perfect companion to a solitary journey. I didn’t do much eating, praying or loving on Bleaker Island, but the film nonetheless felt like a parallel story to my own experience of being alone in a place that was unfamiliar. It helped me articulate something I hadn’t really admitted to myself in advance: that a lot of what I was doing on Bleaker Island was confronting my fear of aloneness. I was there to write, but I was also there to try to learn emotional resilience.

RGC: Do you think you’ll return to Bleaker Island?

NS: I visited the island during its bleakest months, in winter, when it was freezing, snowy and dark, and everything looked monochrome. I’ve seen photographs and heard descriptions of Bleaker in the summer: it is colourful and bright and heaving with wildlife. I’d love to go back and see it in full bloom.

NS: I was lucky enough to spend a year receiving writing and reading advice from Leslie Epstein, who taught me at Boston University. It’s hard to pick just one lesson I learned from him, but I think perhaps it is this: “The only thing that really interests us about other people is what they say and what they do.” Sometimes when my stories get tangled-up and ruminative, I drag myself back to this line, and try again. It always results in something more direct and bold. As for reading advice, apart from Leslie’s insistence that everybody should read Middlemarch, about which he is absolutely right, the author Eley Williams advises writers to be “both profligate and discerning” in their reading, which I think is a helpful paradox.

RGC: Imagine you’re part of a book club discussing Bleaker House. What is a passage you would want to discuss with the group and why?

NS: There’s a short story towards the end of the book called “Character Study,” about a teenaged girl who discovers her teacher’s book of poems and becomes so intrigued by the world described in the book that she tries to enter it. She calls the teacher’s house and visits the teacher’s husband. It’s a story about reading, about fiction and non-fiction and the assumptions we make as readers about the relationship between a creative work and its author. The protagonist is herself a storyteller, constantly thinking about how she’ll narrate the events she’s experiencing to her friends, and the adjustments she’ll make when doing so. She is addressed in the second person: I wanted to talk as directly as I could to an imagined “reader” of Bleaker House, to have a conversation with them about reading and story-telling and the personas we adopt in life and on the page.

I’d like to discuss a passage from that story with the members of the book club, because I think it says something useful about the project of Bleaker House, which was to explore the space between real life and writing, to examine where it collapses and where it expands. Here is the protagonist, reading her teacher’s poetry collection for the first time:

Its cover was an expanse of blank, dark blue, interrupted in the bottom left corner by a honeycomb pattern of hexagons in pink. The title and her name were spelled in white letters: Tessellations, by Bethany Clarke.

At first you skimmed the pages for the sex bits. You found lines about Mr Clarke’s penis, about rippling orgasms, about sweat and semen and screams and a list of “love items” that included his “cut-out buttocks, rising like dust up beyond the window.” None of it rhymed, which was a relief. You had studied Sylvia Plath in Mrs Clarke’s class that year and understood that poems could either rhyme, or be interesting, but never both. “We two, heat-hunched and folded so we fell,” the verse continued, “stripped pink like worms in dirt.”

Tessellations was not disappointing, even when you reached the last page. Then you went back, reading more slowly, filling in the bits between the sex scenes; there was a narrative to it, you discovered, about the two of them meeting, the relationship developing, Mr Clarke playing love songs on his saxophone, then the vitiligo that spread across his skin like clouds and the wedding that took place on the anniversary of the death of his twin brother. You were good at English, good at reading and understanding and imagining things; when you reached the end a second time, you found that you still weren’t done with it, and started over again. “Saxophone goes and goes and I love you,” it said, on the final page, “over-exposed in front of the sun, and so—whiter in parts than even you are.”

It was late, and you were hungry. The smells of other people’s evening meals drifted from the nearby houses up to the garage roofs: roast chicken, garlic. You shuffled backwards down from the ledge, scuffing the leather of your shoes against the bark of the tree and landing with a thud that jolted your knees.

At dinner, your mother and father sat and talked civilly, and you realised for the first time that they didn’t dislike each other as much as you used to think; they just weren’t in love the way Mr and Mrs Clarke were in love.