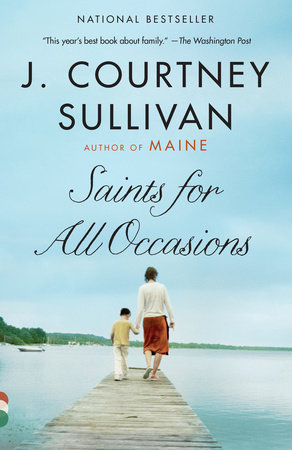 Having the opportunity to do Q&As with some of our favorite authors is one of the best parts of our job here at the Reading Group Center. Just like in your meetings with book clubs, when you ask the right questions a wealth of insight and fascinating tidbits can emerge, as they do in this wonderful Q&A with J. Courtney Sullivan. Her latest book, Saints for All Occasions, is the unforgettable story of two complicated and resilient Irish sisters who travel to America to start entirely new lives in the 1950s. The author drew from her own family history, as well as a vast amount of research, to write this touching family saga. Keep reading to learn more about J. Courtney’s Sullivan’s thoughts on motherhood, the intricacies of sibling relationships, and the women who inspired her inimitable characters.

Reading Group Center: Saints for All Occasions is, first and foremost, about the sacred bond between two sisters who leave their small Irish town to try to make their way in America. Why did you choose to explore this relationship in particular?

J. Courtney Sullivan: One of the things that intrigues me about sibling relationships, in life and in literature, is how extraordinarily different two children from the same family can be. Nora, the older sister in the book, is serious and practical while Theresa is fun-loving and a little bit wild. Their personalities often clash, and yet they are deeply connected.

Nora and Theresa are estranged for much of their adulthood, but each in many ways remains the most important person in the other’s life. Sometimes the absence of someone can be just as powerful as their presence.

I also wanted to explore the sibling dynamic as it plays out among Nora’s own children: The way that alliances form in a large family; how siblings can have such vastly different experiences of being parented by the same people; and how one event can be viewed in a multitude of ways.

RGC: As an Irish-American author, what did telling this story mean to you? Is any part of the book based on the real-life experiences of your family members?

JCS: The seed for this book was planted in my mind twelve years ago, before I had published a single novel. At that time, my family and I visited Miltown Malbay, the small village on the west coast of Ireland where my great-grandmother was born. It was such a profound experience for me. We met cousins we never knew we had. And we got to visit the one-room stone cottage in which my great-grandmother grew up. It is now just a shed on someone’s farm. Standing in front of it, with the rolling green fields and the ocean in the distance, it dawned on me for the first time how extraordinary it was that my great-grandmother traveled to America alone at seventeen years old. And that it was because of her that we are now Americans.

RGC: How much research did you undertake before writing Saints? What did it involve?

JCS: I absolutely love doing research. One of the toughest things about adulthood is that, in most cases, you must pick a path and stick with it. But as a journalist and a novelist, I get to peer into so many lives that are different from my own, and spend a bit of time trying them on.

For Saints, the bulk of my research was for the sections that take place at a cloistered Catholic abbey. I spent several days interviewing cloistered nuns, and was lucky enough to spend a week living and working with them on their farm. In the process, I asked one million questions and they were kind enough to answer.

I also went back to Miltown Malbay and interviewed some extraordinary women who have lived there all their lives. I wanted to get a sense of what my characters’ (and, I suppose, my great-grandmother’s) childhood was like. Little details, down to what sort of chores they had to do, what they ate for breakfast, and what they got for Christmas. And larger ideas, like the role the Church played in their day-to-day lives.

Lastly, I interviewed women in Boston who came over from Ireland in the fifties.

Elements of all these women’s lives made their way into the book, enriching the story. For me, the fictional piece of a novel is the inner world of the characters. But as for the external, I want to get every detail right.

RGC: You became a mother shortly after the release of Saints, which delves deeply into the theme of motherhood and relationships between mothers and their children. Have your ideas about motherhood changed since the birth of your child?

JCS: There is a scene in the novel in which Nora is frustrated at being up in the middle of the night with a newborn. But at a certain point, it says she decided to “give herself over to the strange hour.” In my son’s earliest days, when I had to feed him every two hours around the clock, I often heard those words echoing in my ears at three in the morning, and they actually brought me some comfort. Don’t fight it, just give yourself over to it. It won’t last forever.

Perhaps the only part I’d revisit after experiencing it all firsthand is the scene in which Theresa nurses her child for the first time with basically no difficulty. Breastfeeding is hard to master! At least it was for me. But all the big-picture stuff about motherhood in the novel has been true to my experience. It is transformative and life-changing, and yet fundamentally part of you remains just the same as ever.

RGC: Your novels often feature strong female characters. In this case, Theresa and Nora are both complicated, resilient women. Who are the women in your life that inspire your writing the most?

JCS: Writers tend to return to certain obsessions in their work. One of mine has always been the idea that the time when a woman is born will determine so much of who she’s allowed to become. I love exploring women’s lives in the context of their cultural and historical moment.

I’m inspired by women’s stories all the time, both women I know personally and those I hear about in one way or another. Take my great-grandmother: She traveled alone from Ireland to Boston as a teenager. That was interesting to me, and when I explored further, I learned that among the Irish, because marriage was often delayed, it was quite common for women to immigrate alone. I couldn’t stop imagining what it would be like to be a teenage girl who isn’t allowed to go into her own small village unaccompanied, and then suddenly she’s crossing an ocean by herself.

The nuns in the book were inspired by a family friend, Mother Lucia, who joined a cloistered abbey in the late seventies. She and the other nuns I met defy expectations. They all had full lives before joining, and they believe that the gifts obtained in those former lives enrich the present. Mother Lucia is a Shakespeare lover with a PhD from Yale; she was once a left-wing activist. Other nuns in her community were politicians, artists, talent agents, Wall Street bankers. One of them, Dolores Hart, even starred in movies with Elvis.

JCS: My favorite piece of writerly wisdom comes from E. L. Doctorow: “Writing is like driving at night in the fog. You can only see as far as your headlights, but you can make the whole trip that way.” These words often run through my head as I’m working.

In my research on Benedictine nuns, I found a similar notion expressed in The Rule of Saint Benedict, which was written early in the sixth century: “Do not be daunted immediately by fear and run away from the road that leads to salvation. It is bound to be narrow at the outset.” I have these words written on a Post-It above my desk, to remind me to keep going.

I’m not sure about reading advice I’ve received. But my own personal advice on the subject is if you don’t like a book, there is absolutely no reason to finish. I know people who feel duty-bound to complete every book they start. But life is too short. And there are too many wonderful books!

RGC: Imagine you’re part of a book club discussing Saints for All Occasions. What is a topic or question you would like to pose to the group?

JCS: One theme in the book that I thought a lot about while writing was vocation, devotion. The choice to join a cloistered abbey seems, to most people, really extreme. How can a woman make this decision and vow that she will stick to it for the rest of her life? But in fact, motherhood is just as absolute and most women choose it. So I wonder what a book club would make of that—the notion that the choices we make in our youth, the things we choose to devote our lives to, require constant reconsideration and the triumph of faith over doubt.