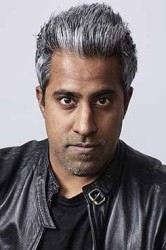 WHY: “This damning portrait of contemporary American philanthropy is a must-read.
“In this provocative and passionate look at philanthropy, capitalism, and inequality, Giridharadas criticizes market-based solutions to inequality devised by rich American do-gooders as ultimately counterproductive and self-serving. Giridharadas insists that ‘the idea that after-the-fact benevolence justifies anything-goes capitalism’ is no excuse for ‘avoiding the necessity of a more just and equitable system and a fairer distribution of power.’
“He turns a gimlet eye on philanthropists who make the money they donate by underpaying employees; luxurious philanthropy getaways that focus more on making attendees feel good about themselves than on creating profound change; and tech companies such as Uber, which promises to empower the poor with earning opportunities, but has been accused of exploiting its workers. Giridharadas calls out billionaire venture capitalist Shervin Pishevar, who opines that ‘sharing is caring’ but refers to labor unions as ‘cartels,’ and profiles Darren Walker, who came from modest beginnings to end up president of the Ford Foundation, where his entreaties to philanthropists to acknowledge structural inequality fall mostly on deaf ears.
“In the end, Giridharadas believes only democratic solutions can address problems of inequality. This damning portrait of contemporary American philanthropy is a must-read for anyone interested in ‘changing the world.'”
–PUBLISHERS WEEKLY, a starred and boxed review 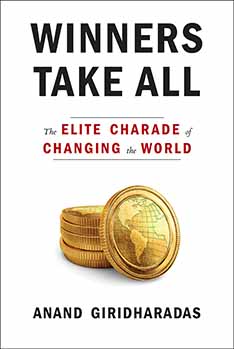