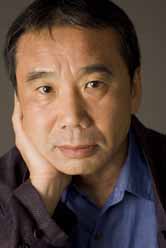 WHAT: KILLING COMMENDATORE, a novel

WHY: “Murakami’s multifaceted genius is expressed not only through his wide-ranging imagination but, even more important, through his ability to ground those imaginative flights in the bedrock realism of human experience.
“E. M. Forster began Howards End with the now-famous epigraph ‘Only connect.’ Writing nearly a century later, in his latest mind-expanding novel, Murakami says, ‘Everything connects somewhere.’ In the space between those statements lies the evolution of the novel from early twentieth-century modernist realism to the kind of genre-leaping metafiction practiced today by Murakami, David Mitchell, and others. And, yet, Forster’s plea for the primacy of human relationships remains central to Murakami’s work, even if, as happens here, those connections can sometimes be terrifying as well as life-sustaining.
“For Murakami, the journey to connecting often begins in a hole in the ground. As much of The Wind-Up Bird Chronicle takes place with the protagonist sitting in the bottom of a well, so the portrait-painter hero of this novel, recently abandoned by his wife, is jolted out of his lethargy by what he finds in a mysterious hole near his rental home on a mountaintop outside Tokyo. A mysteriously ringing bell alerts the narrator to the hole, which leads in turn to his discovery of a painting called Killing Commendatore, hidden in the attic of the house by the former resident, a famous Japanese painter.
“So far, reality has only slightly begun to bend, but the hairpin curves hit the reader as soon as a character from the painting, the murdered commendatore, appears as a two-foot-tall living person. From there, it’s a long and winding road back to the hole and through a nightmare landscape bedeviled by mind-twisting Double Metaphors before the connection our hero seeks can be achieved.
“The complexity of Murakami’s fiction would seem to preclude a mass readership, yet he is the most popular writer in Japan and a best-seller throughout the world.”
–Bill Ott, in a starred review for BOOKLIST

“A sprawling epic of art, dislocation, and secrets.” –KIRKUS REVIEWS

Today when I awoke from a nap the faceless man was there before me. He was seated on the chair across from the sofa I’d been sleeping on, staring straight at me with a pair of imaginary eyes in a face that wasn’t. The man was tall, and he was dressed the same as when I had seen him last. His face-that-wasn’t-a-face was half hidden by a wide-brimmed black hat, and he had on a long, equally dark coat. 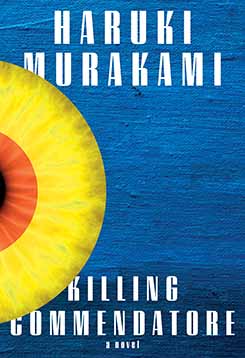 Translated from the Japanese
by Philip Gabriel and Ted Goossen