How Many of These Banned or Challenged Books Have You Read? 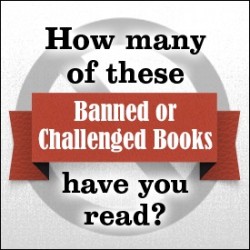 It’s Banned Books Week, and that means it’s time to celebrate your freedom to read! Though it may surprise you, books are still being banned, taken off library shelves, and pulled from classrooms. Some books seen as outrageous for their time have become accepted, but many still rankle even a century later. There are a variety of reasons people challenge books, whether they don’t like the language used or they don’t approve of the content, but that doesn’t mean these voices should be silenced. Words have power, and that’s exactly why books are important. Books can expose us to ideas we never thought of and can allow us a window into experiences we never had. They build empathy and expand our point of view. Often the books that are challenged are the ones we need the most.

We’ve compiled a—by no means exhaustive—list of some of the books that have been banned or challenged throughout history. Take a look to see how many you’ve read, and if you’re missing some, why not add one to the top of your TBR pile? Give it a read, contextualize, think critically, and discuss it with your book group! Stand up to censorship and open your world!

2. The Scarlet Letter by Nathaniel Hawthorne (1850) | Get the Reading Guide

22. The Curious Incident of the Dog in the Night-Time by Mark Haddon (2003) | Get the Reading Guide