The Most Complicated Sibling Relationships in Literature 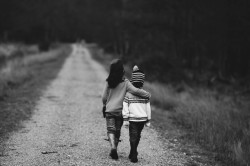 Anyone with a brother or sister can tell you that relationships between siblings can get pretty complicated. They can be competitive and riddled with conflict, while at the same time providing the kind of companionship and understanding that can be difficult to find elsewhere. It’s no wonder that authors often choose to depict the ups and downs of sibling relationships; they offer a vast wealth of emotional depths to explore. We’ve compiled a list of just a few of our favorite novels that examine these unique familial bonds.

When I’m Gone, Look for Me in the East by Quan Barry

Young monk Chuluun has been tasked with finding the reincarnation of a great lama who may have been born anywhere in the vast Mongolian landscape. With him on his quest is his identical twin, Mun, who has rejected the monastic life they once shared. As they navigate the unforgiving and beautiful terrain, from the western Altai mountains to the Gobi Desert and the ancient capital of Chinggis Khaan, their relationship is tested, and they must come to terms with their unique connection, including the fact that they can hear each other’s thoughts.

Raised in Montreal by their disinterested single mother, half-sisters Lark and Robin form a fierce team in spite of their differences. When Lark flees to America to attend college, her sister soon joins her. But even as Lark discovers a calling working in documentary film, she struggles with self-doubt, and Robin chafes against the demands of studying piano at Juilliard. Their bond strains under increasing pressure until it breaks.

Saints for All Occasions by J. Courtney Sullivan

“This year’s best book about family.” —The Washington Post

Nora and Theresa Flynn are twenty-one and seventeen when they leave their small village in Ireland and journey to America. When Theresa ends up pregnant, Nora is forced to come up with a plan—a decision with repercussions they are both far too young to understand. Fifty years later, Nora is the matriarch of a big Catholic family with four grown children. Estranged from her sister, Theresa is a cloistered nun, living in an abbey in rural Vermont. Until, after decades of silence, a sudden death forces Nora and Theresa to confront the choices they made so long ago.

“Chilling. . . . A powerful story of childhood friendship and sisterhood. . . . Dark and compelling.” —BookPage

The Tower Motel was once a thriving attraction of rural Vermont. Today it lies in disrepair, alive only in the memories of the three women—Amy, Piper, and Piper’s kid sister, Margot—who played there as children. They loved exploring the abandoned rooms . . . until the day their innocent games uncovered something dark and twisted that ruined their friendship forever.

Now Amy stands accused of committing a horrific crime, and the only hint to her motives is a hasty message that forces Piper and Margot to revisit the motel’s past, and the fate of two sisters who lived there in its heyday. Sylvie Slater had dreams of running off to Hollywood and becoming Alfred Hitchcock’s leading lady, while her little sister, Rose, was content with their simple life. Each believed the other to be something truly monstrous, but only one knows the secret that will haunt the generations to come.

Matilda Goodman is an underemployed wedding photographer grappling with her failure to live as an artist and the very bad lie she has told her boyfriend (that she has a dead twin). Harry, her (totally alive) brother, is an untenured professor of literature, anxiously contemplating his dead-end career and sleeping with a student. When Matilda invites her boyfriend home for Thanksgiving to meet the family, she falls down a slippery slope of shame, scandal, and drunken hot tub revelations, which force both siblings to examine who they really are and who they want to be.

The Lowland by Jhumpa Lahiri

“Poised, haunting, exquisitely effective storytelling. . . . Lahiri is one of our most beautiful chroniclers of the aching disjunctions of emigration and family.” —San Francisco Chronicle

Here is the unforgettable story of the Binewskis, a circus-geek family whose matriarch and patriarch have bred their own exhibit of human oddities (with the help of amphetamine, arsenic, and radioisotopes). The Binewskis take their act across the backwaters of the United States, inspiring fanatical devotion and murderous revulsion; as its members conduct their own Machiavellian version of sibling rivalry, Geek Love throws its sulfurous light on our notions of the freakish and the normal, the beautiful and the ugly, the holy and the obscene. Family values will never be the same.

“Masterly. . . . At once beautiful, informative, and disturbing . . . [with] stylish prose, taut plotting and dark psychology.” —The Washington

Born into a long line of distinguished lepidopterists—scientists who study moths and butterflies—Ginny and Vivien grew up in a sprawling Victorian home. Forty-seven years later, Ginny lives there alone, tending to her moths and obsessions amid the ghosts of her past. But when her sister, Vivien, returns to the crumbling family mansion, dark, unspoken secrets rise, disrupting Ginny’s ordered life and threatening the family’s fragile peace.

My Sister, the Serial Killer by Oyinkan Braithwaite

“Femi makes three, you know. Three and they label you a serial killer.”

Korede is bitter. How could she not be? Her sister, Ayoola, is many things: the favorite child, the beautiful one, possibly sociopathic. And now Ayoola’s third boyfriend in a row is dead.

Korede’s practicality is the sisters’ saving grace. She knows the best solutions for cleaning blood, the trunk of her car is big enough for a body, and she keeps Ayoola from posting pictures of her dinner to Instagram when she should be mourning her “missing” boyfriend. Not that she gets any credit.

Korede has long been in love with a kind, handsome doctor at the hospital where she works. She dreams of the day when he will realize that she’s exactly what he needs. But when he asks Korede for Ayoola’s phone number, she must reckon with what her sister has become and how far she’s willing to go to protect her.

Sharp as nails and full of deadpan wit, Oyinkan Braithwaite’s deliciously deadly debuts is as fun as it is frightening.