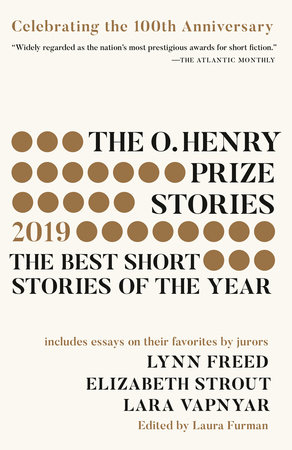 It goes without saying that we at the Reading Group Center love to read, and we are willing to bet our signed copy of the new Margaret Atwood novel that if you’re reading this, you do too. Even so, sometimes there doesn’t seem to be enough time to indulge in our favorite activity, and when there is, we feel the paralyzing pressure to make it count. We’ve definitely given the side eye to the thousand-page literary masterpiece sitting precariously on top of our staggering TBR pile and thought, “It’s not you; it’s me. I just can’t commit to something long-term right now,” then gone back to scrolling Instagram.

Fortunately, we’ve found a cure: The O. Henry Prize Stories! Short stories fit perfectly into those brief time slots between activities and are an easy way to jump-start your reading habit out of a slump. Best of all, according to The Atlantic Monthly, the O. Henry Prize is “widely regarded as the nation’s most prestigious awards for short fiction,” so you know your precious time will be well spent reading the best of the best.

This year we are especially excited because the O. Henry Prize is celebrating its one hundredth anniversary! In the introduction to the anniversary edition, series editor Laura Furman looks back at the ways the collection has changed and been modernized to be more inclusive and diverse over the past century. We hope this snippet inspires you to combat your reading malaise and say goodbye to I’d-rather-be-reading guilt. There’s time in your life to read something short, so don’t wait, dive in!

A Century of the O. Henry Prize

A hundred years ago, when O. Henry’s friends and admirers created an annual book of short stories in his honor, they surely had a different idea than we do today of what constitutes a good story.

O. Henry was famous for his twist at the end of a tale, the unexpected turn or ironic revelation that made the insoluble problems and puzzles in his plots disappear in a puff of laughter or a few tears. Plots were generally more ornate in the early twentieth century, and so too was literary language. Furthermore, stories such as O. Henry’s weren’t expected to be ambivalent. The story’s meaning, often spelled out as a lesson for the reader, was a natural part of the ending.

Today stories come in a greater variety of voices and forms. A story can be written in any tense; in first, second, or third person; composed entirely of dialogue or with no dialogue at all; in one paragraph; in play form; with footnotes; and so on. Sometimes the past of the characters is spelled out and sometimes it is nonexistent, an effort on the writer’s part to create an unending present. As for meaning, that’s left up to the reader. The short story is now an open field for writers, and some of the results might be unrecognizable to an early twentieth-century reader. Still, elements of the form persist: a certain relationship between different pieces of the story, in particular, the passionate desire of the beginning and ending for reunion.

So, too, the inner workings of the collection have changed. The earliest O. Henry Prize stories were chosen by several committees of readers who started with six hundred stories and passed them on in smaller and smaller batches until the final three judges whittled the remaining contenders down to seventeen finalists. Among those seventeen, the judges then ranked three as first-, second-, and third-prize winners.

The process is much simplified now and fairer to writer and reader. Instead of the cascading sets of readers of the early years, the series editor alone chooses the stories, and while past volumes could contain sixteen, seventeen, eighteen, or twenty-one stories, the number has settled at twenty. Starting in 1997, a jury of three writers was convened by the series editor to determine the first-, second-, and third-prize winners, but in 2003, the rankings were eliminated and all the winners are now equally honored. The three jurors now read a blind manuscript separately; each chooses a single favorite and writes about it. This avoids decisions by committee and also makes the process more fun for the jurors since they don’t know who wrote the story or where it was published. Only twice in sixteen years has a story been recognized by a juror.

Looking back at the O. Henry Prize’s beginning decades, other differences jump out. Originally, most of the stories chosen for the collection were by white male writers, though occasionally O. Henry readers could enjoy the likes of Dorothy Parker, Eudora Welty, and Flannery O’Connor. Over the years, the O. Henry has become more welcoming of different voices. So long as a story was originally composed in English it is eligible for consideration, no matter the nationality of the author. If a magazine is distributed in North America, it is welcome to submit stories to the O. Henry. As a result, the annual collection is increasingly international. Readers will find that the 2019 collection offers stories from a variety of writers and set all over the world, from Maui to the American West, from New York to Laos to the East Bank of the river Jordan. The magazines that published the stories in the present collection range from the venerable New Yorker, Kenyon Review, and Sewanee Review to small magazines such as LitMag (in its second year of publication), A Public Space, and ZYZZYVA. Not all submitting publications are print ones; for instance, there’s a story this year from Granta’s online incarnation, Granta.com.

With all the changes the decades have brought, there is a consistent goal: to find exemplary stories and to celebrate the short-story form. It’s been my privilege to be part of the O. Henry’s history since the 2003, and editing the anniversary edition has been as exciting as ever. In its hundredth year, The O. Henry Prize Stories is alive, well, and faithful to its original purpose—to strengthen the art of the short story.