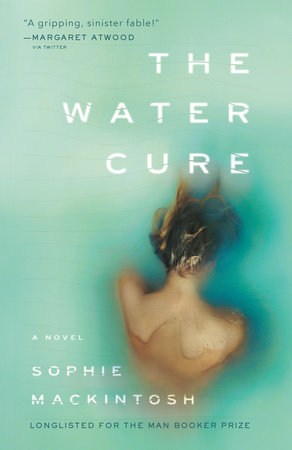 The three sisters in Sophie Mackintosh’s debut novel, The Water Cure, grow up on an island with their mother and father and no other men. Their parents ran a program where women from the mainland would come to escape dangerous men and be cured, but now it is closed and the girls are mostly alone. After their father disappears, three strangers from the toxic outside world wash ashore. The sisters’ lives are turned upside down as dynamics of power, attraction, danger, and trust are suddenly complicated by the men’s arrival. Like Margaret Atwood’s The Handmaid’s Tale, The Water Cure is simultaneously beyond anything we could imagine actually happening, but also all too scarily possible.

In the essay below Mackintosh discusses writing a feminist revenge novel at a time that is ripe for exploring the themes of female desire and toxic masculinity. We hope it inspires your book club discussion.

We live in a time where steps forward have been made for some women’s rights, where equality feels more achievable, if you take a surface-level glance. Yet the crucial word here is some—there are still women all over the world who undergo terrible human rights abuses, who live every day with patriarchal violence. Women who are murdered by strangers or loved ones, women not granted agency over their lives or bodies. We live in a time where some of the most powerful men in the world have assaulted women and show their contempt clearly, where increasingly dominant neo-fascist ideologies want to strip back any hard-won rights, and where women are killed every day. Having grown up in this atmosphere, seeing the accelerating political changes of the past years and the move globally toward the far right, it didn’t surprise me that, as I wrote the novel, my focus grew on exploring the experiences of women within the framework of patriarchal violence, particularly within a structure that we see all the time: a family, a man at the head of this family, and other members and people complicit in upholding the rituals of violence that so often occur within the family unit. I’m also very interested in writing about the ways that desire and violence so often coexist—what it means to need and to love somebody with the capacity to hurt you, the ways in which we pathologize, police, and weaponize female sexuality and emotions. What does it mean to be a “hysterical” woman, a “slut”? Again, it comes back to patriarchy. I never wanted to write an explicitly political novel, and I don’t think The Water Cure is, but I wrote it at a particular moment that informed it, and it couldn’t have come out any other way.