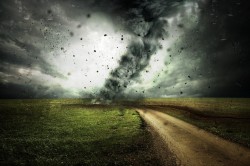 With every day that passes, the effects of climate change become more pronounced. The news is riddled with headlines about horrific natural disasters striking across the globe, spawning several new subgenres of literature. Here, we’ve compiled a list of both fiction (aka “cli-fi”) and nonfiction books that grapple with climate change. Any one of these timely reads will have your reading group questioning what you can do in your own lives to make a difference.

“Activists, students, and policymakers stand to learn much from this deep dive into environmental economics.” —Kirkus

With a focus on climate change, journalist and author Robert S. Devine reveals the fundamental flaws in the economy that enable environmental degradation. The Sustainable Economy looks at many of the most pressing climate issues, such as melting ice caps and farm-killing droughts, but by viewing them through the revealing lens of economics. Devine shows how the basic mechanisms of supply and demand fail when it comes to global warming and the environment. Fortunately, he also lays out a path to an improved economy that can boost our well-being while also fostering a healthy environment. Most importantly, The Sustainable Economy shows how we can overcome the political and personal obstacles blocking progress toward a sustainable, just, and prosperous economy.
Buy the book

“Bohjalian is a master of literary suspense.” —The Washington Post

Patience Avery is a dowser—a “water witch.” Her natural gifts enable her to locate lost items, missing people, and aquifers deep within the earth. This last skill is more in demand than ever, as her home state of Vermont is in the grip of the worst drought in years. Patience knows better than most that this crisis is only the start. One of bestselling author Chris Bohjalian’s earliest novels, Water Witches is a prescient environmentalist and political drama that’s even more relevant today than it was a quarter of a century ago.
Buy the book

The Story of More by Hope Jahren

“Hope Jahren is the voice that science has been waiting for.” —Nature

Hope Jahren is an award-winning scientist, a brilliant writer, a passionate teacher, and one of the seven billion people with whom we share this earth. In The Story of More, she illuminates the link between human habits and our imperiled planet. In concise, highly readable chapters, she takes us through the science behind the key inventions that, even as they help us, release greenhouse gases into the atmosphere like never before. She explains the current and projected consequences of global warming and the actions that we all can take to fight back. The Story of More is the essential pocket primer on climate change that will leave an indelible impact on everyone who reads it.

“Epic. . . . The crowning achievement of a legendary scribe.” —Outside

Taking us from pole to pole and across decades of lived experience, Barry Lopez—hailed by the Los Angeles Times Book Review as “one of our finest writers”—gives us his most far-ranging, yet personal, work to date. Horizon moves indelibly, immersively, through the author’s travels to six regions of the world: from western Oregon to the High Arctic; from the Galápagos to the Kenyan desert; from Botany Bay in Australia to finally, unforgettably, the ice shelves of Antarctica. Horizon is a revelatory, epic work that voices concern and frustration along with humanity and hope—a book that makes you see the world differently, and that is the crowning achievement by one of America’s great thinkers and most humane voices.

The Water Knife by Paolo Bacigalupi

“Bacigalupi is a grim, efficient and polished narrator. . . . Our waterless future looks hot—and filled with conflict.” —The Washington Post

In the near future, the Colorado River has dwindled to a trickle. Detective, assassin, and spy, Angel Velasquez “cuts” water for the Southern Nevada Water Authority, ensuring that its lush archology developments can bloom in Las Vegas. When rumors of a game-changing water source surface in Phoenix, Angel is sent south, hunting for answers. There, he encounters Lucy Monroe, a hardened journalist with her own agenda, and Maria Villarosa, a young Texas migrant who dreams of escaping north. As bodies begin to pile up, the three find themselves pawns in a game far bigger and more corrupt than they could have imagined.

“Powerful . . . as haunting a postapocalyptic universe as Cormac McCarthy [created] in The Road.” —The New York Times

Dr. Michael Beard’s best work is behind him. Trading on his reputation, he speaks for enormous fees, lends his name to the letterheads of renowned scientific institutions, and halfheartedly heads a government-backed initiative tackling global warming. Meanwhile, Michael’s fifth marriage is foundering due to his incessant womanizing. When his professional and personal worlds collide in a freak accident, an opportunity presents itself for Michael to extricate himself from his marital problems, reinvigorate his career, and save the world from environmental disaster. But can a man who has made a mess of his life clean up the messes of humanity?

The Big Ones by Dr. Lucy Jones

In The Big Ones, leading seismologist Dr. Lucy Jones offers a bracing look at some of the world’s greatest natural disasters, whose reverberations we continue to feel today. With population in hazardous regions growing and temperatures around the world rising, the impacts of natural disasters are greater than ever before. The Big Ones is more than just a work of history or science; it is a call to action. Natural hazards are inevitable; human catastrophes are not.

The Year of the Flood by Margaret Atwood

“Timely and gripping. . . . Atwood tells a good story, one filled with suspense and even levity.” —USA Today

Set in the visionary future of Atwood’s acclaimed Oryx and Crake, The Year of the Flood is at once a moving tale of lasting friendship and a landmark work of speculative fiction. In this second book of the MaddAddam trilogy, the long-feared waterless flood has occurred, altering Earth as we know it and obliterating most human life. Among the survivors are Ren, a young trapeze dancer locked inside the high-end sex club Scales and Tails, and Toby, who is barricaded inside a luxurious spa. Amid shadowy, corrupt ruling powers and new, gene-spliced life forms, Ren and Toby will have to decide on their next move, but they can’t stay locked away.

The Future We Choose

by Christiana Figueres and Tom Rivett-Carnac

“This is one of the most inspiring books I have ever read.” —Yuval Harari

In The Future We Choose, Christiana Figueres and Tom Rivett-Carnac—who led negotiations for the United Nations during the historic Paris Agreement of 2015—have written a cautionary but optimistic book about the world’s changing climate and the fate of humanity.

The authors outline two possible scenarios for our planet. In one, they describe what life on Earth will be like by 2050 if we fail to meet the Paris climate targets. In the other, they lay out what it will be like to live in a carbon neutral, regenerative world. They argue for confronting the climate crisis head-on, with determination and optimism. The Future We Choose presents our options and tells us what governments, corporations, and each of us can and must do to fend off disaster.