‘Lord of All the Dead’ by Javier Cercas 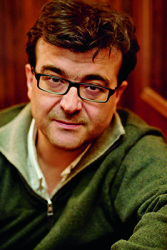 WHAT: LORD OF ALL THE DEAD:
A Nonfiction Novel

WHERE: The author lives in Barcelona.

WHY: “A fascinating, complicated portrait of a young soldier driven to action by the crises of his time and of the present-day relative who seeks to understand him.”
—Diego Baez, BOOKLIST

“A cleverly crafted memoir.
‘Can you be noble and pure and at the same time fight for a mistaken cause?’ Cercas asks. He investigates how people living in tumultuous times develop unexpected political allegiances — and looks at the unintended consequences of those circumstances.” –PUBLISHERS WEEKLY, a starred review

“A Spanish writer haunted by his family’s allegiances during the Spanish Civil War manages to achieve a magnificent reconciliation.
“Having addressed the war in previous works of both fiction and nonfiction, Cercas wrestles in this ‘nonfiction novel’ with a persistent obsession: the short life and ‘glorious death’ of a revered member of his family, his great-uncle Manuel Mena, who died at age 19 as an enthusiastic Falangist (the foe of the Republicans) in the Battle of the Ebro in 1938. Mena had been adored by the author’s mother, who lived in the tiny village of Ibahernando in Extremadura. She had been relocated as a young bride to live in Catalonia, and the family had effectively buried Mena’s name.
“Shame runs at the heart of this story, as the tragedy of the civil war created terrible fissures between Francisco Franco’s loyalists and the Republicans in the tiniest towns of Spain, including the socially stratified village of Ibahernando. Indeed, Cercas had been haunted and obsessed by the shame of his family’s Francoist loyalties his entire life, and he vowed never to write about Mena, although his mother — a kind of long-suffering Beckett-ian character waiting her whole life for a return to the lost glory of her family’s past—hoped he would. Visiting the village and carefully enticing some of the skittish elders who had lived through the war to speak with him, the author clearly illustrates the deep divisions that plagued Spanish society during that tumultuous period.
“Cercas is a marvelous writer, and his character studies of the elusive Mena are masterly. Ultimately, grappling with the enormously nuanced, continuing story of sacrifice, passion, and dishonor allowed for significant forgiveness and release. A beautiful, moving story that must have been extremely difficult for the author to write. Thankfully for readers, he persisted.” –KIRKUS, a starred review