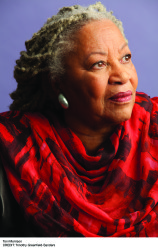 In 2019, the literary world (and humankind at large) lost one of its greatest voices. In the wake of her death, Toni Morrison remains one of the most celebrated and revered writers of our time. A Nobel laureate with an incredible collection of titles to her name, Morrison has long been an authority on race, art, and freedom. In celebration of her incredible contribution to the written word, we’ve compiled a list of some of our favorite works from the author. We highly recommend revisiting some (or all) of these titles with your reading group and soaking up Morrison’s extraordinary wisdom.

“The singular quality of this story makes it worthwhile, especially because the book contains a long, thoughtful introduction by Zadie Smith, who says, rightly, that ‘Recitatif’ should sit alongside ‘Bartleby, the Scrivener’ and ‘The Lottery’ as a perfect—and perfectly American—tale.’” —Ron Charles, The Washington Post

In this 1983 short story—the only short story Toni Morrison ever wrote—we meet Twyla and Roberta, who have known each other since they were eight years old and spent four months together as roommates in St. Bonaventure shelter. Inseparable then, they lose touch as they grow older, only later to find each other again at a diner, a grocery store, and again at a protest. Seemingly at opposite ends of every problem, and at each other’s throats each time they meet, the two women still cannot deny the deep bond their shared experience has forged between them.

A beautiful, arresting story about race and the relationships that shape us throughout life, now for the first time in a beautiful stand-alone edition, with an introduction by Zadie Smith.

The Source of Self-Regard

“Morrison is more than the standard bearer of American literature. She is our greatest singer. And this book is perhaps her most important song.” —The New York Times

Here is Toni Morrison in her own words: a rich gathering of her most important essays and speeches, spanning four decades. These pages give us her searing prayer for the dead of 9/11, her Nobel lecture on the power of language, her searching meditation on Martin Luther King, Jr. She looks deeply into the fault lines of culture and freedom: female empowerment, the press, money, the Afro-American presence in American literature. An essential collection from an essential writer, The Source of Self-Regard shines with the literary elegance, intellectual prowess, spiritual depth, and moral compass that have made Toni Morrison our most cherished and enduring voice.

“So precise, so faithful to speech and so charged with pain and wonder that the novel becomes poetry.”  —The New York Times

Pecola Breedlove, a young black girl, prays every day for beauty. Mocked by other children for the dark skin, curly hair, and brown eyes that set her apart, she yearns for normalcy, for the blond hair and blue eyes that she believes will allow her to finally fit in. Yet as her dream grows more fervent, her life slowly starts to disintegrate in the face of adversity and strife. A powerful examination of our obsession with beauty and conformity, Toni Morrison’s virtuosic first novel asks powerful questions about race, class, and gender with the subtlety and grace that have always characterized her writing.

“Beautiful. . . . God Help the Child is superb, its story gliding along the tracks of Morrison’s utterly assured prose.” —USA Today

“A rhapsodic work. . . . Intricate and inventive.” —The New Yorker

Milkman Dead was born shortly after a neighborhood eccentric hurled himself off a rooftop in a vain attempt at flight. For the rest of his life he, too, will be trying to fly. With this brilliantly imagined novel, Toni Morrison transfigures the coming-of-age story as audaciously as Saul Bellow or Gabriel García Márquez. As she follows Milkman from his rustbelt city to the place of his family’s origins, Morrison introduces an entire cast of strivers and seeresses, liars and assassins, the inhabitants of a fully realized black world.

“Luminescent. . . . There is no novelist alive who has captured the beauty and democracy of the American vernacular so well.” —The Boston Globe

When Frank Money joined the army to escape his too-small world, he left behind his cherished and fragile little sister, Cee. After the war, his shattered life has no purpose until he hears that Cee is in danger.

Frank is a modern Odysseus returning to a 1950s America mined with lethal pitfalls for an unwary black man. As he journeys to his native Georgia in search of Cee, it becomes clear that their troubles began well before their wartime separation. Together, they return to their rural hometown of Lotus, where buried secrets are unearthed and where Frank learns at last what it means to be a man, what it takes to heal, and—above all—what it means to come home.