‘Nobody Will Tell You This But Me’ by Bess Kalb 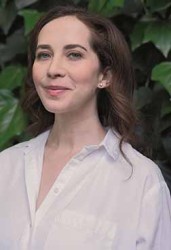 WHAT: NOBODY WILL TELL YOU THIS BUT ME
A true (as told to me) story

WHY: “An endearing, bittersweet, and entertainingly fresh take on the family memoir.
“A Jewish ‘matrilineal love story’ uniquely narrated by a voice from beyond the grave. TV writer Bess Kalb employs an unconventional yet highly effective and charming narrative device, channeling the voice and personality of her now-deceased grandmother, Bobby Bell. Outspoken and persnickety, Bobby snares readers’ attention right from her first comments about how ‘degrading’ and boring being dead actually is and how ‘the worst part was the dirt.’ Drawn from both a generous selection of family images and a text very much grounded in the family’s Jewish heritage, the narrative skillfully captures Bobby’s wit, worldly advice, well-intentioned meddling, and enduring love for her granddaughter.
“Bobby describes her mother as an ‘enormous Russian immigrant in a falling-down house’ who arrived in Brooklyn speaking no English. Bobby also comments on her near-fatal bout with meningitis, her marriage to the author’s grandfather, and her lifelong friendship with Estelle, her sorority sister and fellow Jewish Brooklynite. Kalb sharply reimagines her grandmother’s inner thoughts and feelings as she regales readers with anecdotes about her life and remembers her biting yet fiercely nurturing criticism of the author’s choices in men (‘is he Jewish?’), her appearance (‘you’d be gorgeous if you went a little blonder’), and her relocation to the West Coast (‘no serious person moves to San Francisco’). The true heart and soul of their relationship is reflected in the frequent phone exchanges between grandmother and granddaughter, most of which are hysterical.
“Readers familiar with the Bobby in their own families will appreciate how well Kalb embodies the classic stereotypes of stoic overprotectiveness and frequent exasperation that come with being a parent and grandparent. As the book progresses, the story becomes both sad and poignant as age and illness catch up to Bobby, and though she pokes fun at her situation, the photos and the imagined conversations make for sometimes-heartbreaking reading. Through interviews with her mother and grandfather, voicemails, and nostalgic memorabilia, Kalb commemorates her beloved grandmother, honoring her legacy and inimitable character.” —KIRKUS, a starred review

“Bobby is the charming, hilarious, and ever-quotable star of her own one-woman show.
“Mixing in day-to-day practicalities, crystalline deliveries of amazing family tales, and oft-repeated lines, Kalb-as-Bobby crafts an uncanny rendering of two whole, wholly connected women and their unshakable bond. This is a monumental act of attention, love, and memory.” —Annie Bostrom, in a starred review for BOOKLIST

“This is a fun, touching tribute to family, and the perfect book for anyone who treasures their domineering, spirited grandmother.” —PUBLISHERS WEEKLY

My mother taught me exactly one thing and it’s how to make brisket. It doesn’t take a genius. The key is you just leave it alone. You put the side of beef in a large pot, pour in whatever — red wine, tomatoes from a can, some carrots cut up, a half an onion, a fistful of kosher salt, a potato for your grandfather — and let it sit on a very low flame. I’d pour in some water if it got too dry, but otherwise, it required very little effort. You could forget about it for the entire day and there it would be. Don’t say I never taught you anything. 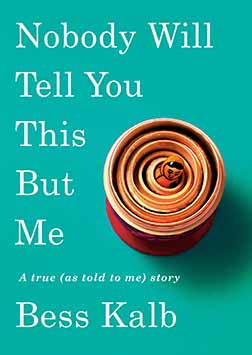