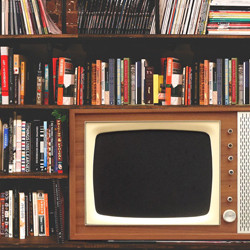 So you’ve been ignoring your bookshelf in favor of Netflix’s siren song or Hulu’s ever-expanding catalog. Don’t worry, we’ve been doing the same. Luckily, we also have a stack of titles ready and waiting for us, for when the credits roll on that final episode. Tune in below for suggestions of TV and book pairings made in heaven. Oh, and don’t forget the popcorn and snacks!

For those in a relationship with Normal People:

Topics of Conversation by Miranda Popkey

If you couldn’t get enough of Marianne and Connell’s winding relationship, Miranda Popkey’s wry and powerful look at relationships, sex, feminism, art, and modern life, told through a series of disconnected conversations over two decades, is the perfect edgy, compact, and captivating addition to your shelf.

For the recipient of the final rose on The Bachelor:

Battling it out for a ring is nothing compared to duking it out for a fortune. Filled with cat fights and unbelievable romantic escapes, back-stabbing schemes and free-flowing champagne, Kevin Kwan’s hilarious novel delivers all the glitz and gossip of your favorite guilty pleasure — without Chris Harrison’s awkward interviews.

For the Never Have I Ever stereotype breaker:

More and more shows are proving representation matters, but film and TV still have a long way to go. In unbelievable, inventive prose that winds from humor to tragedy in mere moments, Charles Yu casts an insightful and unflinching eye on Hollywood tropes, Asian stereotypes, and the roles we are forced to play.

For the families dealing with Parenthood:

No one can predict the happiness and heartache that life has in store. Like the Bravermans, the Sorensons love, lose, fight, and find each other again, in a sweeping, captivating story that shows the hurt family can cause — and the moments of joy that make everything worthwhile.

For the undercover Homeland addict:

Government secrets; international conspiracies; secretary spies. Long before Carrie Mathison set foot in the CIA, these women used their wits and feminine wiles to change the course of history. A thrilling tale based on an unbelievable true story.

For the friends of the Golden Girls:

No one proved how opposites attract like Rose, Blanche, Dorothy, and Sophia, but Precious Ramotswe and Grace Makutsi aren’t far off. Whether solving a mystery, fixing a relationship, or sipping a cup of tea (with just a tiny slice of cake), these women definitely embody the spirit of #friendshipgoals.

For those with their Eyes on The Handmaid’s Tale:

The Testaments by Margaret Atwood

Offred’s television journey has taken some incredible twists and turns, but Margaret Atwood’s return to the legendary dystopian society she created is nothing short of captivating. This long-awaited companion is nothing short of a must-read for fans of the show and the book alike.

For the Mrs. America activist:

The equality fighters of the 1970s weren’t the first women to raise a fuss. Virginia Woolf’s Clarissa Dalloway may not have been marching on the Capitol, but her quiet quest for autonomy, individuality, and equality in 1920s high society is moving even to this day.

For the thrill seekers who couldn’t wait to unmask The Outsider:

Detective Anderson isn’t the only cop walking the line of the law when confronting a disturbing killer. But when Jo Nesbo’s notoriously rogue officer Harry Hole wakes up with blood on his hands, even he isn’t prepared for the twisted case awaiting him…

For the cats and kittens who devoured Tiger King:

Reality TV and rednecks tend to be a dangerous — but fascinating — combination. Tiger King may have been stranger than fiction, but Hiaasen’s madcap adventure through Cajun rooster farms, Key West bars, mob con women and disgraced detectives might be even wilder still.

For the armchair doctors scrubbing in from their living room ER:

The Red Lotus by Chris Bohjalian

It’s been a decade since we said goodbye to doctors Greene, Carter, and Benton, but we’re still craving the action and intrigue of the hospital. Luckily, Chris Bohjalian’s twisted story of love and deceit gives us the adrenaline-fueled world of emergency medicine, with a healthy dose of thrilling mystery.

For the outdoor enthusiast making a bet on You vs. Wild:

The River by Peter Heller

If you’ve ever thought you had what it takes to brave the great outdoors like Bear Grylls, master storyteller Peter Heller’s heart-pounding tale of survival on a remote Canadian river might make you reconsider.