True Crime and Harper Lee: A Q&A with Casey Cep 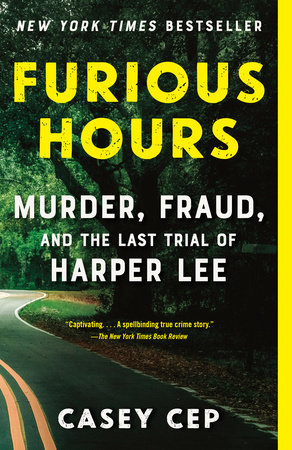 Casey Cep’s debut book Furious Hours is a fascinating combination of true crime and literary history. It tells the true story of Reverend Willie Maxwell, a rural preacher accused of murdering five of his family members in the 1970s, while also delving into the life of Harper Lee, who became fascinated with the case. After To Kill a Mockingbird, Lee started writing a manuscript she called The Reverend, but it remained unfinished at her death and was never found.

In Furious Hours, Casey Cep brings this remarkable story to life. Upon finishing the book, we were left with a lot of questions, and Casey was kind enough to offer some insight. Read on for a thought-provoking Q&A with the author!

Reading Group Center: How did you first hear about the case of Reverend Willie Maxwell? What was it about the story that you think most drew Harper Lee’s attention?

Casey Cep: I first learned about this case when I was reporting on Harper Lee’s novel Go Set a Watchman for The New Yorker. That book shocked the world because it came out of nowhere after decades of Harper Lee saying she would never publish another book, but when I was in Monroeville interviewing people about it, I learned about this other one she had tried to write in the seventies and eighties. I was absolutely gripped—by the story itself, by her interest in true crime, and by the way her life become so entwined with that of the Reverend Maxwell.

RGC: How much research did you do before writing Furious Hours? What did it involve and how long did it take you?

CC: I had never been to Alabama before going down for The New Yorker, but I was able to spend a lot of time in Monroe County, where Lee was born and raised, and over around Lake Martin, where the Maxwell case unfolded. I went back and forth for three years working on it, sometimes renting houses on Lake Martin or staying in what used to be the motel where Lee herself stayed when she was working on her version of this story, but also doing archival research in Montgomery and Birmingham and interviewing various people who had been involved in the case around the state. Lake Martin is a truly beautiful part of the country, and I’m grateful to all of the people who shared their stories or their family’s story, or pointed me toward someone else they thought might know something about this case. And then I tried to do the same thing in New York and Vermont and Kansas and all the other places where Harper Lee had connections—getting people to share stories or letters from her, or directing me to someone else who might do so.

RGC: How did you come up with the title Furious Hours? What significance does it have to the story?

CC: The title comes from a lecture that Harper Lee gave around the time she was working on her version of the Maxwell case. It was one of the only times she lectured in public, and I tell this story in the book, but she was talking about her favorite historian and how he struggled to write a book about Alabama, partly because he could not bear to write the story of what happened to the indigenous tribes that were pushed out by the early settlers. When he says the Creek empire ended “in a few furious hours,” he is describing the last battle of the Creek Wars, which took place around where all these murders happened, not far from where Harper Lee was working on her book. I found the echo haunting—not just of the violence in the region, but of an author who would never finish her own book about Alabama captivated by another one who couldn’t do so either.

RGC: What is it about Harper Lee that you think fascinates so many people to this day? What were you most surprised to learn about her?

CC: I think that Harper Lee never understood how perversely her desire for privacy only made the public want to know more about her; in a sense, she is captivating precisely because she did not make her private life available to the public. I love the way that her childhood friend Truman Capote forms a kind of contrast for her, not only in terms of artistry, but in the relationship between the artist, their art, and the public; he was intensely invested in fame and thrived in the public eye, while she was intensely, some would say pathologically, private. Which is why one of the most obvious things about her is also one of the most surprising: she lived most of her adult life in New York City. She’s rightly associated with Alabama, but she was a New Yorker through and through, and loved the city.

CC: It’s the same advice for both: read as much as you can. Definitely read more than you write, and not just whatever is making its way around the internet. There are certain books and poems I return to often, but I do try to make sure at least some of what I read every day is something old and wise. Not that I only read old things! But I do love to return to them.

RGC: Imagine you’re part of a book club discussing Furious Hours. What is a topic or question you would like to pose to the group?

CC: I think there are a lot of ethical concerns in the book that are certainly worth talking about—everything from the ethics of true crime to insurance fraud. But there are also just a lot of mysteries, and they force us to think about how we can ever know anything or by what evidence or inference we can arrive at truth. In that category is probably the core mystery of the book, and the one that first drew me to the story: did Harper Lee ever finish writing the true-crime book she was calling The Reverend? If not, why? If so, what ever happened to it? So it’s not really a single question, but a series of questions. And they are questions I myself have thought about for a long time and changed my mind on a million times since starting Furious Hours, questions I loved posing to Harper Lee’s friends and family, and now that the book is out, to people who read it: do you think she was ever able to finish the book, and either way, what happened to it?