Books with a Touch of Romance 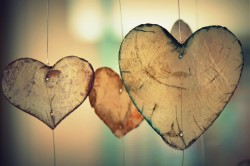 Here at the Reading Group Center, we love love. With Valentine’s Day just around the corner, we’ve been craving a little romance in our lives. But we know that all the hearts and flowers can sometimes be a bit overwhelming. With that in mind, we’ve compiled a list of some of our favorite books that offer a touch of romance. The love story is not necessarily the main plot point in these novels, but you’ll still find plenty of swoon-worthy moments to spice things up.

This classic love story takes place on the De la Garza ranch, as the tyrannical owner, Mama Elena, chops onions at the kitchen table in her final days of pregnancy. While still in her mother’s womb, her daughter to be weeps so violently she causes an early labor, and little Tita slips out amid the spices and fixings for noodle soup. This early encounter with food soon becomes a way of life, and Tita grows up to be a master chef, using cooking to express herself and sharing recipes with readers along the way.

“Utterly charming. . . . Such a tender, carefully polished work that it seems like a blessing we had no right to expect.” —The Washington Post

In Holt, Colorado, Addie Moore pays an unexpected visit to a neighbor, Louis Waters. Her husband died years ago, as did his wife, and in such a small town they naturally have known of each other for decades; in fact, Addie was quite fond of Louis’s wife. His daughter lives hours away, her son even farther, and Addie and Louis have long been living alone in empty houses, the nights so terribly lonely, especially with no one to talk with. But maybe that could change? As Addie and Louis come to know each other better—their pleasures and their difficulties—a beautiful story of second chances unfolds.

Zachary Ezra Rawlins is a graduate student in Vermont when he discovers a mysterious book hidden in the stacks. As he turns the pages, he reads something strange: a story from his own childhood. Bewildered by this inexplicable book and desperate to make sense of how his own life came to be recorded, Zachary uncovers a series of clues—a bee, a key, and a sword—that lead him to a masquerade party in New York, to a secret club, and through a doorway to an ancient library hidden far below the surface of the earth. Together with Mirabel, a fierce, pink-haired protector of the place, and Dorian, a handsome barefoot man with shifting alliances, Zachary travels the twisting tunnels, darkened stairwells, crowded ballrooms, and sweetly soaked shores of this magical world, discovering his purpose—in both the mysterious book and his own life.

“This fully animated portrait of Nancy Wake . . . will fascinate readers of World War II history and thrill fans of fierce, brash, independent women, alike.” —Lisa Wingate, #1 New York Times bestselling author of Before We Were Yours

Based on the thrilling real-life story of socialite spy Nancy Wake, Code Name Hélène is the newest feat of historical fiction from the New York Times bestselling author of I Was Anastasia. Told in interweaving timelines organized around the four code names Nancy used during World War II, this is a spellbinding and moving story of enduring love, remarkable sacrifice and unfaltering resolve. It chronicles the true exploits of an astonishing woman who killed a Nazi with her bare hands and went on to become one of the most decorated women of the time.

Toru, a serious young college student in Tokyo, is devoted to Naoko, a beautiful and introspective young woman, but their mutual passion is marked by the tragic death of their best friend years before. As Naoko retreats further into her own world, Toru finds himself drawn to a fiercely independent and sexually liberated young woman.

Guido and Vincent, best friends (and third cousins), aren’t expecting to fall head-over-heels in love, but that is exactly what happens. Guido is smitten with Holly, a dazzling young woman who chafes at the idea of complacency, while Vincent falls for Misty, a work colleague with an acerbic sense of humor who seems as uninterested in love as she is in Vincent (at first). In the months that follow, both couples will experience the rituals of courtship, jealousy, estrangement, family entanglements, and other perils of the heart, as they try to find love in spite of themselves.

The setting is a small village in southwestern Anatolia in the waning years of the Ottoman Empire. Everyone there speaks Turkish, though they write it in Greek letters. It’s a place that has room for a professional blasphemer; where a brokenhearted aga finds solace in the arms of a Circassian courtesan who isn’t Circassian at all; where a beautiful Christian girl named Philothei is engaged to a Muslim boy named Ibrahim. But all of this will change when Turkey enters the modern world.