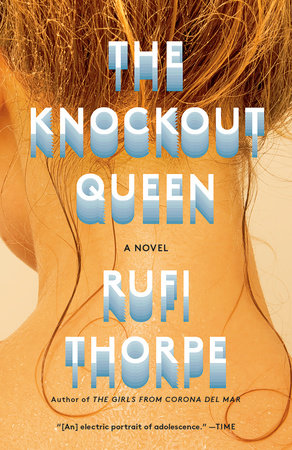 Rufi Thorpe’s latest book, The Knockout Queen, is a dazzling and darkly comic novel of love, violence, and friendship in the California suburbs. Recently named a finalist for this year’s PEN/Faulkner Award, it’s a perfect pick for your next book club meeting.

Similar to Rufi’s popular debut The Girls from Corona del Mar, The Knockout Queen is a coming-of-age novel set in the early aughts that tackles such relatable themes as sexuality, friendship, poverty, and the shame of feeling different. With such rich fodder for discussion, we asked the author herself to answer a few of our burning questions. Keep reading to learn more!

Reading Group Center: How would you describe The Knockout Queen in twenty-five words or less?

Rufi Thorpe: A platonic love story about trying to be a person and finding out you are an animal, alive with unruly desires and impulses.

RGC: What was your inspiration for writing The Knockout Queen? Are there any characters or aspects of the book that feel particularly personal to you?

RT: I have been thinking about Bunny Lampert for many years, over a decade, and she is based on a girl I met at a party who accidentally locked herself in the bathroom and ripped the sink out of the wall. So, in many ways the book started with Bunny. The town of North Shore is very much based on the town where I live now, but at the time I was just moving here and we were looking for a house we could afford, which I wasn’t even sure was possible, and I kept seeing this one realtor’s name, it seemed like he ran an impossible number of listings, and I just thought: who is this guy? And what would it be like to be his daughter? And that is kind of how I got the idea for giving a girl like Bunny a dad like Ray.

RGC: Can you describe your typical writing process? Did your experience writing The Knockout Queen differ at all?

RT: I tend to think about things for years before starting to write them, and that helps. Then I have a really messy draft period where I am trying to figure out the first act, writing fifty pages, keeping five and then writing based on those, starting again from scratch, trying it different ways, messing with the timeline, just trying to get the pieces to fit together. Then when I have a solid act one, I just let it rip. Those writing days are the heavenly ones, where you just go to the computer like a zombie and come to hours later with your legs numb wondering if you are late picking up the children from school.

RT: I love writing on note cards because there is no pressure to be brilliant on a note card. I also do all the voices when I am writing dialogue, which is why I prefer to write with no one in the house. Better always to keep one’s madness a secret, I find.

RT: Deborah Eisenberg had a good one: “You can be mysterious, but you can never be unclear.” I also had a wonderful mentor in college, and this was academic writing, but she would read a sentence of mine and say, now what did you mean by that? And I would tell her and she would say: okay, write that down instead. Actually communicating is the magic thing. Not the style, not how smart you sound saying it: having an actual thing you are trying to communicate and then just trying to communicate it clearly. That’s kind of the whole thing.

As far as reading advice, I am not sure I have really been given any! My mother is the one who taught me to adore reading, and she talked all the time about books as an escape, as like a literal place I could go not only when I got tired of my life or my world, but of being ME. Especially in adolescence, sometimes the sense of being yourself can be so suffocating and terrifying, and books were this pressure relief valve where I could go somewhere else and be someone else. In that sense, the only real reading advice is: read whatever you want. Commune with the minds that are beautiful and hopeful to you.

RGC: If you were to pose one question to book clubs discussing The Knockout Queen, what would you ask and why?

RT: It can be easy to pretend someone you love is not a bad person, but have you ever been forced to see them that way, all the way down to the bone? And then what do you do with all that love for them? It doesn’t go away. You are still holding all that love for them, a thousand slippery valentines clutched in your arms, and in my experience, it starts to really hurt. What is one to do about that? I think that is the question that made me write the book, and I still don’t have the answer.