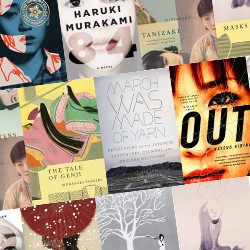 All eyes are on Japan as the world’s most elite athletes gather in Tokyo this summer. To celebrate this quadrennial occasion, we’re delving a little deeper into Japan’s literary culture! We know. We’re total bookworms. But perhaps you are too! If you’re up for a belletristic tour of this year’s host country, look no further than this list of prize-winners and masterpieces. This is by no means a definitive list, but rather an introductory sampling to Japanese authors and titles that you may not yet be familiar with. So as you settle into watching this summer, consider having one of these books handy to read during commercial breaks.

Yukio Mishima’s Spring Snow is the first novel in his masterful tetralogy, The Sea of Fertility. Here we meet Shigekuni Honda, who narrates this epic tale of what he believes are the successive reincarnations of his friend Kiyoaki Matsugae.

The year is 1984 and the city is Tokyo. A young woman named Aomame follows a taxi driver’s enigmatic suggestion and begins to notice puzzling discrepancies in the world around her. She has entered, she realizes, a parallel existence, which she calls 1Q84 —“Q is for ‘question mark.’ A world that bears a question.” A love story, a mystery, a fantasy, a novel of self-discovery, a dystopia to rival George Orwell’s—1Q84 is Haruki Murakami’s most ambitious undertaking yet: an instant bestseller in his native Japan and a tremendous feat of imagination from one of our most revered contemporary writers.

The Makioka Sisters by Junichiro Tanizaki

Junichirō Tanizaki’s magisterial evocation of a proud Osaka family in decline during the years immediately before World War II is arguably the greatest Japanese novel of the twentieth century and a classic of international literature. Filled with vignettes of a vanishing way of life, The Makioka Sisters is a poignant yet unsparing portrait of a family—and an entire society—sliding into the abyss of modernity.

The Memory Police by Yoko Ogawa

On an unnamed island, objects are disappearing: first hats, then ribbons, birds, roses. . . . Most of the inhabitants are oblivious to these changes, while those few able to recall the lost objects live in fear of the draconian Memory Police, who are committed to ensuring that what has disappeared remains forgotten. Powerful and provocative, The Memory Police is a stunning novel about the trauma of loss.

Nobel Prize winner Yasunari Kawabata’s Snow Country is widely considered to be the writer’s masterpiece: a powerful tale of wasted love set amid the desolate beauty of western Japan. Komako, a lowly geisha, gives herself fully to Shimamura, a wealthy dilettante, without remorse, despite knowing that the affair can have only one outcome. In chronicling the course of this doomed romance, Kawabata has created a story for the ages — a stunning novel dense in implication and exalting in its sadness.

Out by Natsuo Kirino

Nothing in Japanese literature prepares us for the stark, tension-filled, plot-driven realism of Natsuo Kirino’s award-winning literary mystery Out. This mesmerizing novel tells the story of a brutal murder in the staid Tokyo suburbs, as a young mother who works the night shift making boxed lunches strangles her abusive husband and then seeks the help of her coworkers to dispose of the body and cover up her crime. The coolly intelligent Masako emerges as the plot’s ringleader, but quickly discovers that this killing is merely the beginning, as it leads to a terrifying foray into the violent underbelly of Japanese society.

The Tale of Genji by Murasaki Shikibu

The Tale of Genji is a lively and astonishingly nuanced portrait of a refined society where every dalliance is an act of political consequence, a play of characters whose inner lives are as rich and changeable as those imagined by Proust. Chief of these is “the shining Genji,” the son of the emperor and a man whose passionate impulses create great turmoil in his world and very nearly destroy him.

Following the death of her son, Mieko Toganō takes an increasing interest in the personal affairs of her widowed daughter-in-law, Yasuko. Devastated by her loss, she skillfully manipulates the relationships between Yasuko and the two men who are in love with her, encouraging a dalliance that will have terrible consequences. Meanwhile, hidden in the shadows, is Mieko’s mentally disabled daughter, who has her own role to play in her mother’s bizarre schemes. In Masks, Enchi has crafted a stunning and understated novel of seduction and infidelity.

March Was Made of Yarn, edited by Elmer Luke and David Karashima

A collection of essays and stories by Japanese writers on the 2011 earthquake in Japan, its aftermath, and the resolve of a people to rebuild. Here, eighteen writers give us their trenchant observations and emotional responses to such a tragedy, in what is a fascinating, enigmatic, and poignant collection.