A Guide to the Nanette Hayes Mystery Series 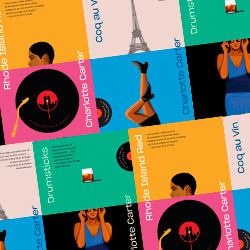 Charlotte Carter’s Nanette Hayes series introduces us to a truly memorable heroine, a jazz-loving street busker turned amateur sleuth whose love life leads her into some very hot water. Although these mysteries were originally published in the late 90s, they remain as fresh and relevant as ever. Catapult Magazine raves “Carter’s characters rarely do what one might expect. Reading her work just gives you a jolt.”

In celebration of the publication of the final installment, Drumsticks, we’re taking a look back at the full trilogy with this helpful series guide. Buckle up and enjoy Nanette’s misadventures from the streets of New York to the historic underbelly of Paris.

“The sweet, clear sound of Nanette’s musical voice keeps us on her corner, tossing all the change we’ve got.” —The New York Times

Nan’s day is not off to a good start. Her on-again, off-again relationship with Walter is off . . . again, and when she offers a fellow busker a place to stay for the night, he ends up murdered on her kitchen floor. To make matters worse, the busker turns out to have been an undercover cop. And his former partner has taken an immediate and extreme dislike to Nan. Soon she’s on the hunt for a legendary saxophone worth its weight in gold. But there are plenty of people who would kill for the priceless instrument, and Nan’s new beau just might be one of them.

“This high-spirited tour of Paris has terrific charm . . . with the infectious energy of eternal youth.” —The New York Times Book Review

Nanette’s life is finally getting back to normal when her mother calls her with some upsetting news: Nan’s beloved bohemian aunt Vivian has gone missing. Normally this is par for the course with Viv, but this time the circumstances surrounding her aunt’s disappearance are rather troubling. Would Nan mind brushing up on her French language skills and flying to Paris to track her down? Would she ever. But trouble has a way of finding Nan, and her search for Vivian lands her in the underbelly of historic Paris and in the crosshairs of some of its most dangerous denizens.

“This Grace Jones lookalike with a degree in French is a splendid creation.”—The Sunday Telegraph (London)

Nanette is on the rocks. Heartbroken and alone, she finds what comfort she can in the bottom of a bottle. But her life seems to turn around when she’s given a voodoo doll, so much so that Nan seeks out the doll’s creator, Ida, to thank her. Unfortunately, the meeting doesn’t go so well, and Ida ends up with a bullet in her head. Guilt-ridden, Nan resolves to get justice for her new friend, only to find that Ida was hiding some dark skeletons in her closet. But will Nan solve Ida’s murder or fall victim to the same forces that brought her down?