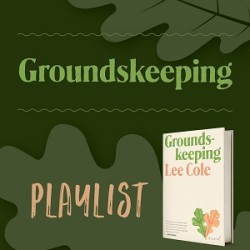 Music and writing have always been closely linked for me. I often have songs on my mind when I work, not so much because of their subject matter, but because of the emotions they evoke. If I’m lost in a piece of writing and can’t find my way, listening to a song can be like shaking a compass and finding true north again.

In this way, the songs collected here represent an emotional roadmap of Groundskeeping. Some of the artists are praised by characters in the novel, while others are only mentioned obliquely. It’s a motley assortment of styles – Willie Nelson and Emmylou Harris alongside New Order and Solange. But they capture the novel’s contradictory theme: longing to escape your home, and at the same time feeling helplessly rooted, unable to leave.

Playing these songs takes me back to Kentucky and the world of the book—from the dance floor at a Germantown bar and the country music cassettes in Pop’s truck to the albums and songs that form the backdrop to Owen and Alma’s romance. But they also take me back to that time in my life when I wrote it—when often the only remedy for homesickness was a song.
—Lee Cole

(If you can’t see the Spotify playlist, click here.)