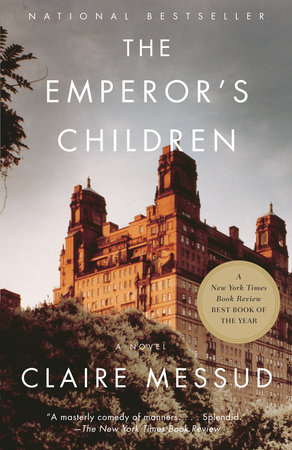 The introduction, discussion questions, author biography, and suggestions for further reading that follow are meant to enliven your group’s discussion of The Emperor’s Children, Claire Messud’s richly plotted, densely populated comedy of manners and ideas. Like some of its high-profile antecedents, it’s set in New York City: not the august, whalebone-corseted New York of Edith Wharton’s The Age of Innocence nor the brainy, feuding city of Saul Bellow’s Humboldt’s Gift, but New York at the turn of the twenty-first century, when restaurants have taken the place of museums—and maybe even churches—and every new magazine launch is billed as the opening salvo of a revolution. It’s a New York where ideas, along with beauty, have become a form of currency, essential for anyone who wants to go anywhere but not to be taken too seriously. Much of the novel’s comedy arises from the misunderstandings between those characters who understand this and those who don’t: The latter have their hearts broken.


1. At the novel’s onset, most of the characters are outside New York. Why might Messud have chosen to begin in this manner? At what other points in the book do the characters leave the city, and with what results?

2. Which of the novel’s characters strikes you as its moral center? Is it Bootie, who comes to New York with such high ideals and easily rankled feelings? Is it Danielle, who has lived there long enough to feel at home but who still sees its pretensions and absurdities? With which of these characters is the reader meant to identify? Whose judgments seem the most reliable? And what flaws or blind spots afflict them?

3. Julius is obsessed with the characters of Pierre and Natasha from War and Peace, longing to be the sparkling Natasha but fearing he’s really more like the brooding, self-conscious Pierre. Bootie is constantly quoting Emerson. Which of the other characters has an emblematic book, and what role do those books play in their lives, in the way they see the world, and, of course, the way they see themselves? Is Julius anything like Pierre or Natasha? Does Bootie really live up to Emerson’s criterion of genius? At what points do they similarly misread other characters?

4. Almost everybody in The Emperor’s Children envies, and is intimidated by, somebody else. Julius, for instance, is
in awe of Marina’s self-confidence and envious of her sense of entitlement. Marina is cowed by her father. Poor Bootie is a virtual pressure cooker of indiscriminate awe and resentment. What do Messud’s characters feel insecure about? Is there anyone in the book who seems truly comfortable with him or herself or any relationship that seems to be conducted by equals? Would you say that awe and envy are this novel’s dominant emotions?

5. Marina, we learn, frequently accompanies Murray to public functions, and is sometimes mistaken for his “trophy wife” [p. 40]. Does their relationship strike you as incestuous [p. 121]? Compare Marina’s unfolding relationship with Ludovic to her bond with her father. Do you think that Ludovic—incidentally, the only major character who is seen entirely from the outside—really loves Marina or is merely using her, and if so for what purpose?

6. Just as Marina has symbolically taken over her mother’s role, “Danielle had the peculiar sensation of having usurped her friend’s role in the Thwaite family, and more than that, of having usurped it at some moment in the distant past, a decade or more ago: she felt like a teenager . . and she was suddenly, powerfully aware of the profound oddity of Marina’s present life, a life arrested at, or at least returned to, childhood” [p. 46]. How many of the other characters seem similarly suspended? Which of them seems like a full-grown adult, and what does it mean to be an adult in the scheme of this novel? If Danielle has indeed usurped Marina’s place, what is the significance of her affair with Marina’s father? Which of the other characters takes on another character’s role, and for what reasons?

7. When pressed to take a job, Marina confesses, “I worry that that will make me ordinary, like everybody else” [p. 74]. To what extent are other characters possessed by the same fear, and how do they defend themselves against it? Do they have a common idea of what constitutes ordinariness? Can ordinariness even exist in a social world in which everyone is constantly, feverishly striving to be unique? Is it possible that Marina is just lazy and prevaricating in her charming way?

8. With his high-flown ambitions, his indolence, and his appalling sense of hygiene, Bootie initially seems like a comic character. But in the course of the novel Messud’s portrait of him darkens until he comes to seem either sinister or tragic—perhaps both. How does she accomplish this? Which other characters does she gradually reveal in a different light? Compare Messud’s shifting portrayal of Bootie to her handling of Julius and Danielle. In what ways do they too evade or defy the reader’s initial expectations about them?

9. On similar lines, both Ludovic and Bootie denounce Murray as a fraud while Bootie in particular prides himself on his sincerity. But is such sincerity a good thing? What other characters embrace that virtue, and with what results? Compare Bootie’s frank literary assessment of his uncle with Murray’s frank critique of his daughter’s manuscript, or his even franker response to Bootie’s essay. When in this novel does honesty turn out to be a pretext for something else? And when do subterfuge and deception turn out to be acts of kindness?

10. Murray feels that his mother’s efforts at improving him succeeded only in “turning her boy into someone, something, she couldn’t understand” [p. 135]. By contrast, he thinks, Marina has been paralyzed by the very expansiveness of her upbringing. What does this novel have to say about parents and children? Which of the Emperor’s children has proved a disappointment? Does any parent in this novel (Murray, Annabel, Judy, Randy) truly understand his or her offspring? And is it good for said offspring to be understood?

11. Some of Messud’s characters begin the novel in a state of happiness and others attain it, but nearly all of them see their happiness threatened or even shattered. How does this come about? Which of them is the victim of outside forces and which is responsible for his or her fall? How would you describe this novel’s vision of happiness? Considering that the typical comedy has a happy (or happy-ish) ending, what do you make of the fact that so many of Messud’s characters end up bereft or disappointed?

12. Among this novel’s many characters, one has to include the character of New York City. How does Messud bring the city to life? Compare Murray’s New York with that of Marina, Danielle, Bootie, and Julius. What is it that draws the characters to prove themselves in New York?

13. What role do the events of September 11, 2001, play in The Emperor’s Children? Are there other points when history—or reality—impinges on the safe and mostly privileged world its characters inhabit? What is the significance of Annabel Thwaite’s client DeVaughn or results of Julius and David’s affair? Does the ending make sense when compared with the rest of the novel?