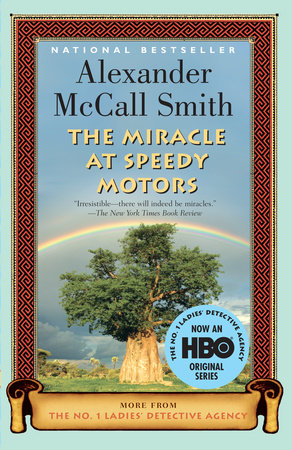 The Miracle at Speedy Motors

The introduction, questions, and suggestions for further reading that follow are designed to enhance your group's conversation about Alexander McCall Smith's The Miracle at Speedy Motors, the ninth installment in the acclaimed No. 1 Ladies' Detective Agency series.


1. After Mma Makutsi protests about the agency's address being “in care of” Tlokweng Road Speedy Motors, Mma Ramotswe thinks about the meanings of the phrase. “Yes, we were all care of one another in the final analysis, at least in Botswana, where people looked for and valued those invisible links that connected people, that made for belonging” [p. 5]. Would you consider this idea central to the book? To which characters or events in the story does this phrase “in care of” seem most pertinent?

2. Mma Sebina comes to the agency in the hope that Mma Ramotswe will find her relatives: “Please find me a birthday, and find me some people” [p. 24]. So the novel begins like a Victorian orphan story—something like Jane Eyre—with a character seeking an identity. How else do the themes of family and identity arise in the novel?

3. Puso jumps out of the car when Mma Ramotswe mentions his Bushman background, of which he is ashamed [pp. 33–34]. She tells him, “You mustn't be cross with your mummy” [p. 35], and realizes she has called herself his mother for the first time. What progress does this family of two foster children and two nonbiological parents make throughout the course of the novel in strengthening their bonds of love and trust?

4. In Chapter Four, Mma Ramotswe and Mr. J.L.B. Matekoni discuss Mma Makutsi's impending marriage and the question of whether men should have to pay the bogadi for their wives [pp. 45-50]. What is unsettling for Mma Ramotswe about this conversation? What details help to create the quiet comedy of the situation?

5. In her visit to Mma Sebina's village, Mma Ramotswe tells the woman under the tree, “I am a lady first and then I am a detective. So I just do the things which we ladies know how to do—I talk to people and find out what has happened. Then I try to solve the problems in people's lives. That is all I do” [p. 71]. Is it true that Mma Ramotswe is “a lady first”? How relevant or necessary is the fact of her being a woman to her success in solving problems for people?

6. As in all of the books of this series, the land plays a silent but important role in the lives of the characters. Mma Ramotswe, watching rainclouds gather, thinks “we Batswana are . . . dry people, people who can live with dust and dryness but whose hearts dream of rain and water” [p. 76]. Why are conditions of the land and the weather so central for Mma Ramotswe? Is it ironic that the rainclouds, “stacked in towering layers; so sudden, so welcome” [p. 74], cause the disaster that befalls Mma Makutsi's new bed?

7. Mr. Polopetsi becomes a suspect in the case of the threatening letters. Does it seem that Mma Ramotswe has become less generous in her attitude toward him [pp. 89–90]? What character traits bring him under suspicion? When the writer of the threatening letters is revealed, Mma Ramotswe's assumption that the writer was a man [pp. 14–15] is proven wrong. Is it unusual that Mma Ramotswe was wrong in her thinking on this matter?

8. Mr. J.L.B. Matekoni meets a doctor who promises him that Motholeli's paralysis can be reversed [p. 96]. What difficulties does this unexpected development cause for Mma Ramotswe? Why does she come up with the money, given her lack of faith in the treatment? How does she behave when Mr. J.L.B. Matekoni and Motholeli return home [p. 211]? What is exceptional about her handling of the whole predicament?

9. Why is Mma Makutsi reluctant to tell her fiancé the truth about what happened to the new bed? What does it suggest about their relationship that she doesn't feel she can tell him? Why is his eventual response surprising to her [p. 187]?

10. In most detective fiction, readers seek the identity of the criminal or the resolution of a mystery. Who are the criminals, and where is the mystery, in The Miracle at Speedy Motors? In what ways does Mma Ramotswe differ from most fictional detectives? How do plot and pace differ, and what unique features distinguish The No. 1 Ladies' Detective Agency series from conventional mystery novels?

11. Reflecting upon Motholeli and the suffering of Africa in general, Mma Ramotswe considers that “fundamental unfairness seemed to be a condition of human life. . . . What could one say to the poor, who had only one life, one brief spell of time, and were spending their short moment of life in hardship? And what could she say to Motholeli?” [pp. 145–46]. Does she have words of comfort for Motholeli?

12. What qualities make Precious Ramotswe such an unusual person? How would you describe the quality of her insight or wisdom? Do you find her inspirational, and if so why?

13. In the delicate matter of the health of Mma Ramotswe's van, Mma Potokwane is uncertain of how truthful she can be. Do you agree with her list of the matters that, even between close friends, cannot be criticized [p. 148]?

14. Why is Mma Makutsi shocked at the letter Mma Ramotswe dictates for Violet Sephotho [pp. 202–03]? What do you think of Mma Ramotswe's resolution that “we must answer her hatred with love” [p. 204]?

15. What is puzzling about Mr. Sekape and his attitude toward his newly discovered sister? Why is he so excited if, as he says, he dislikes women [p. 184]? Once it turns out they are unrelated, does it seem likely that Mma Sebina will succeed in marrying him [pp. 207–08]?

16. What miracles does Mma Ramotswe observe, in place of the large miracle her husband has hoped for? What is the significance of the title [p. 213]?

17. A typographic design, repeating the word Africa, follows the novel's final sentence. How does this affect your reading of the ending, and what emotions does it express?