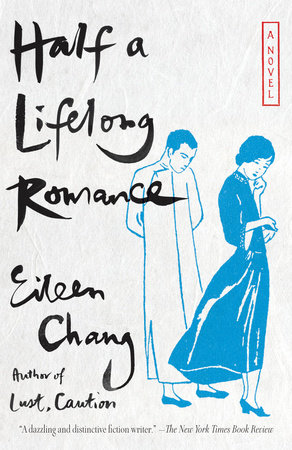 Half a Lifelong Romance

This guide is intended to enhance your discussion of Eileen Chang’s Half a Lifelong Romance, a story of star-crossed love tested by the challenges of family and society in an era filled with change.


1. How does the book’s title, Half a Lifelong Romance, apply to the different couples in the book?

2. Early in the novel, the narrator states, “It just goes to show that the same thing can look very different, to different people” (page 21). How does this apply to the way each character views the other characters and their choices throughout the book?

3. Half a Lifelong Romance is set during the Second Sino-Japanese War, during which time Shanghai under occupation. How is the war depicted in the novel? How is it present (and absent) in the lives of the characters?

4. In what ways are the women in the novel limited by the conventions of 1930s Chinese society? How do the expectations of women differ when they are in Nanking (the country) versus Shanghai (the city)? How are Manzhen, Manlu, and Tsuizhi treated differently in the novel?

5. How is infidelity viewed by each of the main characters? How does this change throughout the novel? Who holds more power—Shijun’s mother or the concubine? Does the power dynamic shift at any point?

6. Shijun repeatedly worries that Manzhen was disappointed in him for giving up his job in Shanghai to take over his father’s business, but Manzhen never expresses this sentiment. Shijun is simply projecting his own feelings onto Manzhen. What other times does he do this in the novel?

7. Who is more to blame for Manzhen's kidnapping: Manlu or Hongtsai? How are other characters, like Manzhen’s mother and the servants, implicated in keeping her confined? A complete stranger eventually helps Manzhen escape. What does this imply?

8. Immediately after Manzhen’s attack, Manlu is “overcome with shame” but decides “it was too late now for regrets . . . she’d have to stay evil till the bitter end” (page 224). Does Manlu in fact remain malicious, or do you think she finds redemption before she dies?

9. On page 340, Manzhen thinks, “Looking back now, all she saw was the huge mistake she had made. The first mistake was Hongtsai’s. But she shouldn’t have married him afterwards. That was her big mistake.” Do you agree that marrying Hongstai was Manzhen’s big mistake? How do both fate and her own actions shape her destiny?

10. Shijun claims to have married Tsuizhi only because of his grief over his father and Manzhen and that he would have married any girl he spent time with during that period. Do you think that is true? Does Tsuizhi feel the same way about her decision to marry Shijun?

11. Manzhen chooses to marry a man who repulses her so that she can be with her son. Shijun has children with Tsuizhi, but he does not display deep love for them. Do you think that Manzhen and Shijun would have made good parents together?

12. At the end of the novel, the focus shifts between Manzhen and Shijun, but the reader never gets a full account of either side of the story. Why do you think the author chose to do this?