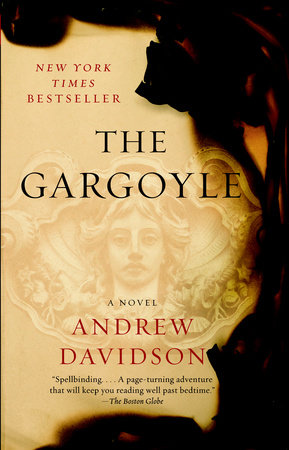 “Spellbinding.... A page-turning adventure that will keep you reading well past bedtime.” —The Boston Globe

The introduction, questions, and suggestions for further reading that follow are designed to enhance your group's enjoyment of Andrew Davidson's captivating saga, The Gargoyle.

Whether you read The Gargoyle with a book group or as a solo experience, this is a novel rich with topics for further exploration. Incorporating legends and locales drawn from a medieval monastery, Viking raiders, Victorian England, feudal Japan, Italian literary masterpieces, and other imaginative threads, Andrew Davidson weaves copious history into this singular love story. This guide is designed to illuminate many of those details, yielding facts behind the fiction while raising questions for contemplation or discussion. An interview with the author is included as well, revealing surprising aspects of the story behind The Gargoyle.


1. Dante's Inferno
First published in 1314, this epic poem is the first “song” in Dante Alighieri's three-part Divine Comedy; subsequent canticles describe Purgatory and Paradise. In The Inferno, Virgil guides Dante through the underworld, comprising nine concentric circles that represent varying degrees of condemnation, from the unbaptized in Limbo to traitorous Satan at the center.

Dante begins his tour of hell on Good Friday, 1300, the suggested day and year of Marianne's birth. The day of Christ's crucifixion, Good Friday makes additional appearances in The Gargoyle: It is Sister Christina's birthday and the day of the narrator's car accident.

Like Dante, The Gargoyle's narrator begins his journey in the woods, at the age of thirty-five. Contemplation of suicide occurs in early passages of The Inferno as well as The Gargoyle.

For Discussion: In The Inferno, condemned souls receive punishments that correspond to their sins. The Gargoyle's narrator loses his ability to consummate sex, but he retains his ability to feel intense desire. What other forms of hell does he suffer? What do Dante's images signify to Marianne? What sort of tailor-made suffering might Dante have invented for you? What do a society's beliefs regarding the afterlife say about that society's values in general?

2. The Medieval Church
The founding of the Dominican monastery Engelthal occurred as described in The Gargoyle. In its strictest definition, “monastery” can refer to a religious retreat for both women and men, though Engelthal nuns did not preach as friars did. The nuns' predecessors, the beguines, were also sometimes seen as a threat to ecclesiastical authority. The women who worked in the renowned Engelthal scriptorium in the fourteenth century are said to have produced more extant texts than any other religious house of their era.

At the time of Father Sunder's death in 1328, he and Brother Heinrich had lived together for thirty-eight years. Father Sunder was said to have had very special status, and was called a “pope in heaven” with the Power of the Keys, effectively granting him the authority to forgive any sin at any time.

Heinrich Seuse's extreme, self-inflicted physical suffering captures a medieval Christian approach to the opposition between body and spirit, and to the desire for God and man to achieve a metaphysical union. Meister Eckhart, who explored similar questions, was declared a heretic under trial by Pope John XXII.

The Three Masters are derived from Heinrich Seuse's attempts to control his tongue. He called on three spiritual masters, Father Dominic, St. Arsenius, and St. Bernard, and would not speak without receiving their permission in a vision.

Marianne's assertion in Chapter Five that “God is a circle whose center is everywhere and whose circumference is nowhere” was commonly invoked by medieval theologians. Continually persecuted by religious and political entities, the Jews of medieval Germany lived in two worlds: one of segregated self-governance and Talmudic codes, and one of utter dependence on the whims of papal authority.

For Discussion: How does medieval Catholicism compare to the other forms of faith-religious or otherwise-captured in the novel? In what ways does contemporary society still struggle with the tandem between body and soul? Was it easier for you to relate to Marianne's mysticism or to the narrator's atheism?

3. Gargoyles
The legend describing the creation of the first gargoyle, recounted in Chapter Three, is just one of many versions. Andrew Davidson invented the battle scene between Romanus and La Gargouille; it does not appear in published legends.

The concept of using a sculpture depicting an animal's mouth to divert water from buildings dates well before medieval Europe. Ancient Egyptian and Greek architecture is rife with apparatuses that would qualify as “gargoyles.”

As Marianne says in Chapter Twenty, medieval gargoyles were indeed sometimes painted bright colors. Oranges, reds, and greens were popular, and some gargoyles were gilded. They were made from a variety of materials, including limestone, marble, lead, or metal, and they usually weighed several hundred pounds.

Scholars debate the intended message behind medieval gargoyles. Perhaps they were meant to ward off evil spirits, or to depict evil forces. Early Gothic examples easily convey a moral lesson, while later ones can frequently be interpreted as comical.

For Discussion: In Chapter Five, Marianne describes herself as “a vessel that water is poured into and splashes out of, a flowing circle between God and the gargoyles and me.” In Chapter Sixteen, the narrator realizes that Marianne “loved [the gargoyles] out of the stone.” What mandate is she fulfilling in both of these descriptions? What makes Marianne's mandate relevant to the modern world? What traits does the narrator share with medieval gargoyles?

4. Legendary Lovers
The author incorporated the four Greek classical elements of the physical world when writing Marianne's legends: Sei lived as a glassblower (Air) and died by being buried alive (Earth). Victoria lived as a farmwoman (Earth) and died by drowning (Water). Siguror lived as a Viking (Water) and died in a burning longhouse (Fire). Francesco lived as an ironworker (Fire) and died by breathing in the Plague (Air).

Brandeis and his fellow mercenaries served during a tumultuous time for the Holy Roman Empire. Between 1314 and 1347, Louis the Bavarian served as Duke of Bavaria, the German king, and the Holy Roman Emperor, meeting with constant resistance from the papacy (including excommunication).

Marianne's fairy tales are Davidson's inventions. Though the novel's depictions of Engelthal incorporate many figures from true history, none of the incarnations of Marianne and the narrator are based on such characters.

Marianne's copy of The Inferno was found among the possessions of the archer Niccolò, later revealed to be the father of metalworker Francesco. Sei is stung by the Asian giant hornet, the world's largest wasp (and among the deadliest).

Siguror's “fine boat grave” refers to a highly honorary burial style used in the Vendel era and by the Anglo-Saxons, the Merovingians, the Vikings, and occasionally the Ancient Egyptians. This form of burial was thought to enable passage to Valhalla. In Norse mythology, the paradise of Valhalla is the great hall where war heroes greet the afterlife. The less fortunate are relegated to a cold, dismal kingdom of death ruled by the goddess Hel.

Tom's ill-fated voyage is alluded to in the story of Siguror and Einarr, when Bragi stumbles off his sleeping bench during the fire while the floor seems “to lurch like a boat deck during a storm.”

In Chapter Seven, Marianne tells the narrator that he must do nothing for her in order to prove his love. This foreshadows her final scene on the beach in the novel's closing passages.

For Discussion: Throughout each liaison, how do the novel's lovers honor their fate? In each case, who or what is the greatest threat to their happiness? Do you agree with Meister Eckhart's descriptions of love and death in the novel's epigraph? Which of Marianne's tales was the most memorable for you?

In Chapter Nine, the narrator wonders whether he can trust Sayuri's translation of her conversation with Marianne. In fact, he can. Sayuri gave him a faithful rendering of their words.

The names of the nun-nurses of Engelthal echo those of the nurses who tend to the narrator in the present time: Mathildis, Elisabeth, and Constantia versus Maddy, Beth, and Connie.

While the word gargoyle is related to a French word meaning gargle, the word grotesque (a non-aquatic gargoyle) is derived from the Old Italian grottesca, meaning “cave painting,” from which the English word grotto evolved. Marianne's linguistic abilities are an allusion to the New Testament's Book of Acts 2:3, in which the apostles speak in tongues when preaching the gospel.

Gertrud's German translation of the Bible is one of Andrew Davidson's inventions.

When Sayuri asks the narrator if he is genki, she is asking him if he is feeling energetic. “Genki desu ka?” is a common Japanese greeting, essentially asking “Are you feeling well?”

For Discussion: How does the multilingual aspect of The Gargoyle shape the novel, giving voice to the universal aspects of the human experience? How do Marianne's vignettes offer a testament to the power of words and language?

6. The Gargoyle begins with arguably one of the most stunning opening scenes in contemporary literature. How was the author able to make horrifying details alluring? What was your initial reaction to these images?

7. How were you affected by the narrator's voice and his ability to address you in an intimate, direct monologue? How did his storytelling style compare to Marianne's? In what ways did these tales balance reality and surrealism?

8. Arrows form a recurring symbol throughout the novel. What are their various uses as tools of war and of love? What makes them ideal for Marianne's stories?

9. What medical aspects of the narrator's treatment surprised you the most? Did his gruesome journey change the way you feel about your own body?

10. How did Marianne's experience of God evolve and mature throughout her life? How do you personally reconcile the concept of a loving God and the reality of human suffering?

11. Marianne uses her body as a canvas. What messages does it convey? How does the narrator “read” bodies before his accident, both in front of the camera and while picking up less-dazzling strangers?

12. Discuss the role of ghosts and memory in The Gargoyle. In what ways does the past repeat itself? How are the characters shaped by past circumstances? When are their painful cycles to be broken?

13. What does Marianne's copy of The Inferno indicate about the value of books beyond their content? In what way can a book also be an art object, or an artifact of history?

14. Eventually, Nan reveals her own burn scars. What motivates the novel's healers—including Nan, Marianne, Sayuri, and Gregor? Whom does the narrator heal?

15. Discuss the role of money throughout The Gargoyle. What kept Jack honest? What did it mean for Marianne, a woman, to have far more money than the men in her life, both in the 14th century and in the contemporary storyline?

16. How did you interpret the narrator's own Dante-esque tour, described in Chapter Twenty-nine? Was he hallucinating, in the throes of withdrawal while he kicked the bitchsnake of morphine, or did he journey to an underworld? Or both? Was Marianne a mere mortal?

17. The novel closes with Marianne's departure and the marriage of Gregor and Sayuri. The narrator grapples with guilt, trying to understand whether he could or should have saved Marianne. What enabled Gregor and Sayuri to recognize and nurture their love for one another? What determines whether a relationship will become exhausted or perpetually revitalized? Is fate or willpower the greater factor?