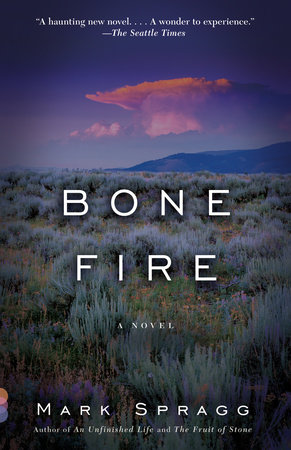 
1. The novel begins with Griff and her horse, and ends with Kenneth and Einar. Who would you say is the protagonist of Bone Fire?

2. Page 6 describes Griff “finding it impossible to admit that when she and Paul are making love it’s the grinding of their bones she hears, the clamor of one animal moving against another.” Why does Griff think of sex with Paul this way? How would you characterize Griff and Paul’s relationship?

3. Spragg often begins a chapter without making it clear which character is being discussed, preferring to use pronouns at first and reveal the character in question a few paragraphs into the chapter. Could you always tell which character was which? What purpose might this initial ambiguity serve in Spragg’s narrative?

4. At the scene of the murder, on page 20, Crane thinks nothing of taking a beer out of the victim’s fridge and drinking it. Later in the novel, he also smokes marijuana. How does the sheriff approach his job? Is he more concerned with justice than with the strict letter of the law? Is this an outdated mind-set?

5. On page 29, Paul tells Griff that he prefers Chicago to Wyoming because he can “go out for a beer and not have the rest of the bar waiting for Tonto to get drunk and piss his pants, or pull a knife and go to scalping, and you know goddamn well that’s how it can feel for me here.” Were you surprised by Paul’s frank description of racism in the West?

6. When Crane starts to suspect there is something wrong with his health, he doesn’t tell his wife. He even lies to her about his neurologist’s visit—on page 37, we learn that “he told Jean he had to escort a prisoner to Billings and drove by himself to the clinic.” In fact, Jean doesn’t find out about Crane’s ALS until Helen tells her on page 201. Why does Crane keep his diagnosis from his wife? What does it tell us about their relationship?

7. Why, on pages 67–69, does Einar decide to dig a hole and burn “all the letters he’d written Ella from Korea, most of the family photographs, wedding rings, birth and death certificates, marriage licenses, everything he could put his hands on that authenticated his eighty years of using up a body”? Does his justification—that he doesn’t want Griff “to have to deal with anything but the disposal of his body”—ring true to you? Is the act really one of concern for Griff, or is it a sign of dementia?

8. On page 77, Marin tells Einar she thought maybe they had fallen out of touch because Einar didn’t like the fact that she lived with a woman—to which he responds, “I wouldn’t know anything about that.” Later, on page 159, Kenneth debates his own sexuality, and McEban tells him, “You’re just fine either way.” How does Bone Fire deal with the topic of homosexuality? Did you find it to be sensitive? Realistic?

9. One of the most striking aspects of Bone Fire is the way in which it juxtaposes old-fashioned Western scenes, like horseback riding and tending to the ranch, with contemporary technology and culture—for example, the iPod Kenneth receives from Claire (page 111), the text-messaging slang Starla uses with Crane (page 114), or the TV shows Jean watches (page 118). How fluidly do Spragg’s characters move between their old-world sensibilities and their new-world lives? Do you think Spragg is making a statement about American culture? What might it be?

10. When Kenneth is about to run away from Rodney and Claire’s house, he remembers that “his mother had told him once that it wasn’t lying if you told people what they wanted to hear” (page 145). What does this tell the reader about Kenneth’s mother? Why is it so easy for her to manipulate Rodney and McEban? Later in the same paragraph, Kenneth tries to anticipate the questions that might come up, but “didn’t kid himself about them not being lies.” Is Kenneth more mature than his mother? If so, how did he come to be that way?

11. Why does Kenneth choose to leave? What does his life with McEban offer that Rodney and Claire can’t?

12. Bone Fire might seem at first like a traditional mystery novel—Crane discovers someone murdered just twenty pages in, and spends much of the novel on the case. However, the novel doesn’t function as a whodunit: McEban doesn’t gather clues, the murderer doesn’t turn out to be any of the characters we get to know, and it would be impossible for the reader to guess what had happened. In fact, on pages 151–157, Janey Schilling offers a full confession that explains all the circumstances of the murder. If Bone Fire is not a mystery, what role does JC Tylerson’s death play in the story?

13. One connecting thread between many of the characters in the story is a person the reader never meets: Griffin, who is Einar’s son, Griff’s father, and Jean’s ex. How does the memory of Griffin influence the narrative?

15. On page 221, McEban comes across a car accident. Were you surprised that it turned out to be Jean’s accident? Did Jean need to be fatally wounded in order to realize that she actually loved Crane? Do you believe they truly loved each other?

16. Does Paul make the right choice in deciding not to go to Uganda after all? Will he and Griff be happy together in Chicago? Will Einar and Marin be happy in Wyoming?

17. What did you make of Brady and Crane’s final confrontation on pages 230–232? When Brady pleads, “Can’t you just fucking do this? Pretend I’m on fire,” what does he mean? Is justice served?

18. Spragg describes Griff’s bone sculptures to some extent, but also leaves them open to interpretation—what did you imagine they looked like? Why does Griff choose to leave them with Einar?

19. There are many fires throughout the novel; what is the significance of the last fire that McEban, Einar and Kenneth build in the final chapter?