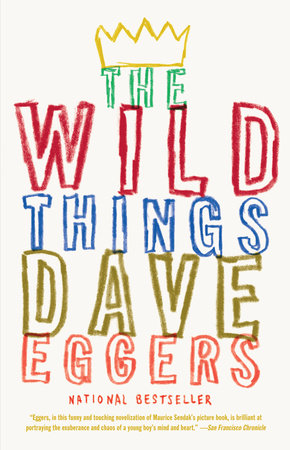 “Eggers, in this funny and touching novelization of Maurice Sendak’s picture book, is brilliant at portraying the exuberance and chaos of a young boy’s mind and heart.” —San Francisco Chronicle

The introduction, questions, and suggestions for further reading that follow are designed to enhance your group’s discussion of Dave Eggers’ marvelous new novel, The Wild Things, based on Maurice Sendak’s classic children’s story, Where the Wild Things Are.


1. Maurice Sendak’s classic children’s story, first published in 1963, is extremely brief, containing only nine sentences, just over 300 words, and a series of wonderfully expressive illustrations. How is Eggers able to get inside such a compressed story and extend it into a novel? In what ways does the novel stay close to Sendak’s story? In what ways does it imaginatively expand upon Sendak’s story?

2. What are the family dynamics that push Max into running away? What is the source of Max's anger?

3. When Max bites his mother, we are told that “Max had never bitten her before. He was scared. His mom was scared. They saw each other anew” [p. 77]. Why is this such a powerful and frightening moment in the novel? In what ways is it the appropriate action that leads to Max’s running away?

4. How does The Wild Things illuminate the challengers families face today?

5. The narrator says that Claire “had adopted a tone of perpetual dissatisfaction and annoyance with everything Max did, and with most things that existed in the world” [p. 4]. How does Max’s own stance toward life differ from that of his 14-year-old sister? How is the adult world depicted in the novel?

6. What fantasies does Max’s life among the beasts fulfill? What does he find there that he was denied at home?

7. How should the beasts be understood? Are they projections of Max’s fantasy life—aspects of his character or unconscious? Are they manifestations of his own uncivilized, destructive urges, his wish to be an animal?

8. When Max says that he feels responsible for ruining the island, Alexander tells him: “You really think you wrecked this island? You think you’re that powerful? That you’re the reason everyone is happy or sad?” [p. 262]. Where else does Max feel his actions have such enormous impact?

9. In what ways are the beasts both dangerous to Max and protective of him? How do they regard him? How do their feelings toward him change over the course of the novel?

10. After the war he started goes terribly awry, Max feels that “everything he did, at home or here on this island, caused permanent damage” [p. 209]. What are the parallels between Max’s destructive behavior at home and on the island?

11. What is the significance of Max’s relationships with Carol and Katherine? How does he relate differently to each of these characters?

12. Why was Max’s final act on the island necessary? What is the symbolic significance of this act?

13. Children’s books often offer a mixture of fantasy and moral or ethical instruction. Does The Wild Things have an implied moral? What does Max learn from his experience with the beasts?

15. Dave Eggers co-wrote (with Spike Jonze) the screenplay for the film version of Where The Wild Things Are. If you have seen the film, how does the novel differ from the movie? Which form seems closer to Sendak’s original story?  How do the film and novel compliment each other?