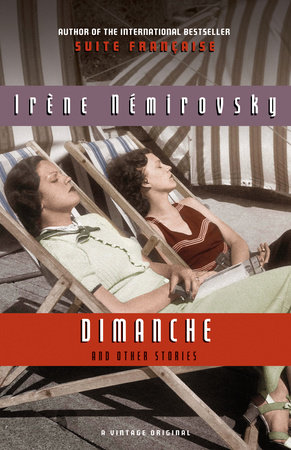 Dimanche and Other Stories

The questions and discussion topics included here are intended to enhance your group’s conversation about this collection of never-before translated stories by Irene Némirovsky, author of the internationally bestselling novel Suite Française.

•  Why is Agnes isolated in her roles as mother and wife? What does Agnes know about life that her daughter Nadine doesn’t realize she knows?

•  What insight into the two women’s lives is gained when Némirovsky juxtaposes the mother’s thoughts and memories with the daughter’s ongoing experience with Rémi? What larger point does the story make about women’s vulnerability and men’s infidelity?

•  What details in the early part of the story convey a sense of weary repetition and frustration in the family’s weekly Sunday dinner?

•  The daughters-in-law “knew, or thought they knew, that their husbands belonged to them alone; they had eroded the bond between the sons and their mother so cleverly and effectively, so worn it down, that it hardly existed any longer. . . . But within the affectionately tolerant way they looked at her, there remained a repressed animosity and a longing for revenge” (p. 73). How does the story make clear that the mother is more powerful than her daughters-in-law assume she is?

•  The brothers pull together when their mother seems to be on the verge of dying.  During this time, they realize that in their marriages they are truly alone, and yet they feel a true bond with each other and with their sister. How does the story’s title resonate throughout? What, if anything, changes in the course of the story for the family members? What happens when the mother recovers?

•  The main character, Christian Rabinovitch, is described as delicate, melancholic, weak, “constantly anxious, timid as a rabbit” (pp.125–26). He is an assimilated French Jew whose son is soon to marry into the French aristocracy. Does the story suggest that there is some underlying reason to explain Rabinovitch’s constant anxiety?

•  Discuss the exchange between Christian Rabinovitch and the man he meets at the train station, whose name also happens to be Rabinovitch (p.133).  Given the title of the story, does he see the man as a brother (p.138)? In what ways does Némirovsky use irony throughout the story?

•  The story is told in a series of letters from Clémence, a dying woman who was formerly a chambermaid in the home of a couple whose marriage ended when the wife shot and killed her philandering husband. With whom is Clémence’s sympathy, and why? What is the secret she has long kept about her ex-mistress?

•  What aspects of Clémence’s writing style help the reader to imagine what she is like as a person? The technique of telling a story solely through letters is called “epistolary” narration, which was popular in the eighteenth century. What is unusual about a story told in this way?

•  This powerful story about childhood memories centers on the narrator’s memory of what seems to have been a spell of witchcraft, which resulted in a young woman falling in love with her mother’s lover. Are we meant to believe that Klavdia actually cast a spell that caused the abrupt departure of Lola and Uncle Serge from the family (pp.187–90)?  Or are we to understand that their affair was imminent, or already under way, and that the “spell” was only a sort of game that made it public (p.196)?

•  How does the fact that the story is narrated through the eyes of an eight-year-old girl affect the reading of this passionate tale?

•  How does the story let us know that Hugo is an aesthete and a narcissist? If you have read Suite Française, what character does Hugo bring to mind?

•  Discuss the paragraph at the bottom of page 202, in which Hugo thinks about his suffering. Considering what happens at the end of the story, how do you respond to Hugo’s thought that “Europe has the charm of those who are going to die. . . . It was the same in Salzburg before the Anschluss” (p.203)?

•  This story, like the previous one, centers on an older man who is single, rich, and extremely self-involved. “His greatest concern was where to invest his money and how to avoid heavy taxes” (p.222).  Mr. Rose stays too long in Paris in the spring of 1940 and becomes a refugee along with thousands of others as France falls to the invading German army. Why does he stay with Marc instead of taking a ride in the car?

•  As in “Don Juan’s Wife,” a character in this story discovers a secret about a loved one who has died. Why is the response of Roger Dange to the revelations Mademoiselle Cousin makes about his wife a surprising one? What was most important to him about Flora?

•  One of the startling aspects of some of Némirovsky’s stories is the way they seem to express a foreknowledge of the murderous fate approaching the Jews. What is the effect of reading a story like “Brotherhood” knowing that Némirovsky would herself face deportation and death as a Jew?

•  In several stories, wives suffer from their husbands’ pursuit of other women. Do women, for Némirovsky, seem to be at a disadvantage in love and marriage? If so, what recourse do the stories suggest women have for reclaiming some degree of happiness?

•  Do you find the stories that have a more historical aspect more powerful than those that focus on more personal and domestic observations, or vice versa? What, for you, are the best stories in the collection?