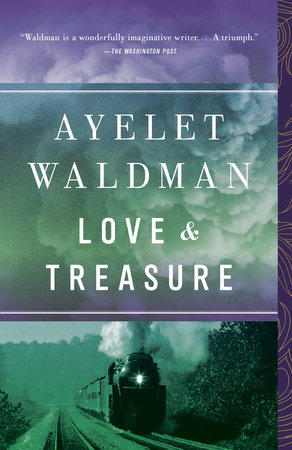 The questions, discussion topics, and reading list that follow are intended to enhance your reading group’s discussion of Love and Treasure, Ayelet Waldman’s ambitious and mesmerizing novel that weaves love, intrigue, and politics against the true story of the Hungarian Gold Train.


1. Love and Treasure is a novel that illuminates the shifting nature of identity. In the beginning of the novel, Jack Wiseman is described as a New York Jew whose father’s parents are of “authentic German Jewish stock,” (page 18) yet he finds it a struggle to connect with both the American soldiers under his command and the European Jews he encounters. How does Jack’s definition of himself change over the course of the novel? How do Jack’s fellow soldiers view him? How is he viewed by the Hungarian civilians he meets? What does this say about the how cultural heritage is assigned or interpreted?

2. On page 12, Jack admits that for many years the “contents of the pouch had been a kind of obsession” to him. In what ways does his granddaughter internalize this obsession and make it her own? What drives Natalie’s quest? Did Jack send her on this mission out of duty to the owner or to renew the “glimmer of interest” (page 13) in his granddaughter that had been destroyed by her divorce? Both?

3. When Jack first meets Ilona, he declares that she is all “wire and sparks” (page 29). How does her presence help Jack to better understand his identity as a Jew? As an American? How does she challenge his views about the war or its aftermath?

4. Throughout the novel, Jack is caught between his duty to country (in maintaining his position of watching over the train) and his duty to the people of Hungary (in trying to ensure that the goods are returned to their rightful owners). How do these two missions conflict with each other?

5. Chart Jack’s view of the military over the course of the novel, taking into account his interactions with his fellow American soldiers. Does he relate to any of the soldiers? If so, who? Discuss his conversation with Lieutenant Hoyle at the bar after his breakup with Ilona. How did you interpret the violence at the end of this encounter?

6. Jack’s encounters with Aba Yuval give him a more fully realized understanding of the political situation facing the Jews of Europe. What is Jack’s mind-set going into the trip where he helps smuggle the refugees over the border? What are his feelings toward the group’s goal by the end of the mission? How does this encounter challenge his understanding of nationalism?

8. On page 139, Natalie struggles to admit to Amitai that the pendant is stolen, instead saying her grandfather “found” it during the occupation. Why does she stumble over these words? What does her hesitation say about the definition of discovery? Of ownership? How are these problems echoed throughout the novel? How are they reflected in the world of stolen paintings that Amitai deals in?

9. Compare and contrast the failed marriages of Amitai and Natalie. How do their failed marriages prepare them for meeting each other? Discuss the symbolism of Natalie wearing the pendant to her wedding to Daniel.

10. Why is Amitai hesitant to share his military past with Natalie? What other sins of omission occur throughout the novel? ( page 156)

11. Amitai is Israeli but he craves “the anonymity of the immigrant, to be a man with a vague accent in a city of vague accents” (page 175). How does this desire for erasure contrast with Natalie’s desire to understand her cultural heritage? How do their respective homelands encourage or complicate those desires?

12. When Natalie Stein becomes Natalie Kennedy, she meaningfully disrupts the established script for her behavior. What does this say about the fluidity of identity? How does this transgression embolden her?

13. On page 221, the pendant is returned to as close to its rightful heir as possible. What was your reaction to Dalia’s request to get the necklace appraised? What does her indifference to the physical object say about the dilution of history over time? Of personal connection to the Holocaust? To kin?

14. On pages 224–225, Natalie and Amitai fill out the Page of Testimony for Vidor Komlós, Gizella Weisz, and Nina Einhorn. What is the significance of this act?

15. The events of part three are narrated from the perspective of Dr. Zobel, a Freudian analyst. Why do you think the author to choose to include this point of view? Is the doctor reliable as a narrator?

16. Gizella and Nina are introduced as strong-willed women who are ahead their time: Nina dreams of medical school, and Gizella is active in radical politics. What challenges do these early feminists face, both from their countrymen and from their families? Why do you think Zobel seeks them out years later?

17. Stealing is a motif in the novel: Jack pockets the pendant; the American soldiers freely “shop” from the Gold Train; Natalie lifts a painting; Amitai deals in the world of stolen paintings. How do the motivations for these acts differ? Who is morally right in his actions? What does the novel as a whole assert about ownership?

18. Love and Treasure is a novel that weaves intricate plotlines among stunning character portraits, bringing to life a historical event with fictitious details. Yet as the history unravels, gaps emerge and often disrupt a clear narrative. What does this assert about memory, both collective and personal? About how history is interpreted or reinterpreted over time?