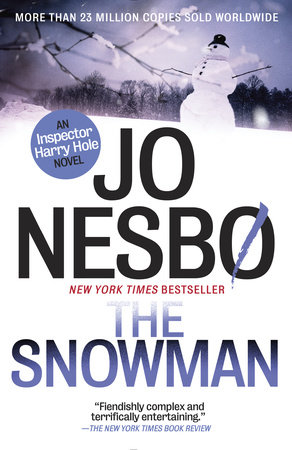 The questions, discussion topics, and reading list that follow are intended to enhance your reading group’s discussion of The Snowman, Jo Nesbø’s latest novel in the Harry Hole Detective series.


1. The Snowman begins with a disturbing scene set in 1980, more than two decades before the events that follow.  How does the opening establish the mood of the rest of the novel? What recurring themes and motifs does it introduce?

2. In what ways does the investigative team—Magnus Skarre, Katrine Bratt, and Bjorn Holm—represent the different viewpoints and skills involved in police work? What do the details about their demeanor and interests (for example, the description of Bratt and the profile of Holm) as well as their reactions to Harry’s presentation of the case convey about their personalities?

3. Rakel, Skarre, and Hagen offer succinct descriptions of Harry and what motivates him. Can Harry’s “anger and the desire for revenge” and his history of alcoholism be attributed to his experiences as a police detective or are they personal flaws?

4. Do you agree with Hagen’s comparison between Harry and military leaders and his assertion that "There’s a strong social urge in man to be needed. . . . You want this case to be special. You want it so much that you can see the blackest of the black"?

5. What does Harry’s relationship with Rakel and especially with Oleg reveal about him? What personal principles, emotions, and values underlie his attachment to them? What incidents in the investigation also capture this side of him?

6. To what extent do the police rely on standard assumptions about the disappearance or deaths of women in their approach to solving the crimes? Do the circumstances of the individual women—including their relationships with their husbands and children and their reputations within the community—influence the direction of the investigations?

7. The murdered women all had secrets. Discuss the reasons for or explanations of Sylvia Ottersen’s, Eli Kvale’s, and Birte Becker’s lies and deceptions. What does their behavior demonstrate about their sense of power—or lack of power—in their marriages? What moral questions arise in each case?

8. The journalist and TV pundit Arve Stop says, “as a pressman and a liberalist I have principles to consider. The issue here is whether I, as a declared anti-establishment watchdog, should unconditionally make my services available to the ruling power’s forces of law and order” and goes on to say, “I promise to assist in any way I am able . . . If you in the force assist us." Does this passage accurately illustrate the relationship between the police and the media? Can you offer real-life examples of cases that indicate cooperation, either blatant or covert, between them? Are there situations in which such collaboration is helpful?

9. During the investigation several people come under suspicion. Are the suspicions in each case supported by credible arguments and evidence? Which suspects seemed to you the most likely to have committed the murders and why?

10. How does Nesbø set the stage for the encounter between Bratt and Avre Stop? What aspects of  Bratt’s personality—and of Stop’s—enable her to manipulate the dangerous course of events?

11. What characteristics, good and bad, does Harry share with Rafto? In what ways are their careers similar? How do they compare to other fictional detectives in classic and contemporary literature?

12. What are the major turning points in the investigation? What do the twists in the plot demonstrate about the interplay of  routine procedures and intuition in solving the murders? Discuss why Harry attributes his identification of the killer to “a fluke. An atypical fluke” and what this implies about the nature of criminal investigations.

13. What drives the killer’s decision to “leave clear clues, show them the connections, give them the bigger picture”? In what ways do the killer’s actions and motivation conform to your beliefs or knowledge about serial murderers, both fictional and real? Consider such factors as psychological problems caused by childhood traumas; the possession of above-average intelligence; the ability to charm others; and the sense of superiority often associated with such criminals.

14. Harry’s mentor Stale Aune, says, “The more aged I become, the more I tend to the view that evil is evil, mental illness or not. We’re all more or less disposed to evil . . . we’re all sick with personality disorders. And our actions define how we are." To what extent do the characters in the novel—victims, suspects, and members of the police, including Harry—struggle with “personality disorders”?  In your opinion, does some degree of mental illness explain most, if not all, criminal behavior?

15. What techniques does Nesbo use to control the pace and tension of the narrative? Discuss the effect of the flashbacks that interrupt the on-going investigation; Harry’s private moments with Oleg and Rakel; the casual interactions among the police team; and the detailed, graphic accounts of crimes and the discovery of bodies.

16. Do the descriptions of life in Norway—from the weather to the rivalry between the cities Oslo and Bergen, to discussions of crime and other societal problems—enhance the novel? What function do the references to the American elections and culture serve?

17. Jo Nesbø is one of several Scandinavian crime fiction authors who are increasingly popular in this country. In what ways does The Snowman, well as works by Stieg Larsson, Henning Mankell, and Maj Sjöwall, differ from American thrillers? What qualities, if any, distinguish Harry and his colleagues from the detectives depicted in American books, television shows, and movies?