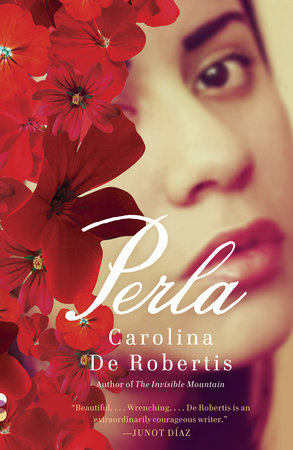 The questions, discussion topics, and reading list that follow are intended to enhance your reading group’s discussion of Perla, Carolina De Robertis’s intimate, unforgettable portrait of one young woman’s explosive search for truth.


1. Why do you think the author paired a quote from Moby-Dick with one from the former commander of the Argentine army for her epigraph?

2. What do you think inspired twelve-year-old Perla to write a story that reflected badly on her own parents?

3. “I described my experience at Romina’s bookshelves, opening volume after volume as if opening the gates to textual cities. In those cities, among those words and meanings, I said, the true trajectory of my life began” (p. 77). How did Perla’s experience with those books shape her future? What role do words and ideas play in her life, and in the novel?

4. Several times in the novel, the notion of “two Perlas” comes up. What did that mean to you initially, and how did your understanding change by the end of the story?

6. What did we learn from the story of the dead geraniums (chapter 5)?

7. On page 100, Héctor tells Perla, “It was war. It was a just war.” How did he and Luisa justify their behavior? Do you think they were really as comfortable with it as they seemed?

8. Perla calls herself a coward more than once in the novel, until Gabriel finally insists she’s brave. In what ways is each of them right?

9. “I did not want to erase the person that I’d been all these years when I did not know where I came from. However false my identity might be, it was the only one I had. Without it I was nothing” (page 201). Why does Perla feel this way? Ultimately, what changes her thinking?

10. Throughout the book, De Robertis uses water imagery. What is the significance when Perla drenches the home she grew up in (p. 216)?

11. Why does the painting by Perla’s aunt survive the destruction?

12. Most of the novel alternates between two points of view: Perla’s and her birth father’s. Why does De Robertis switch to Héctor’s point of view for chapter 13, “Homecoming”?

14. Why do you think the novel ends with Perla meeting her birth families?