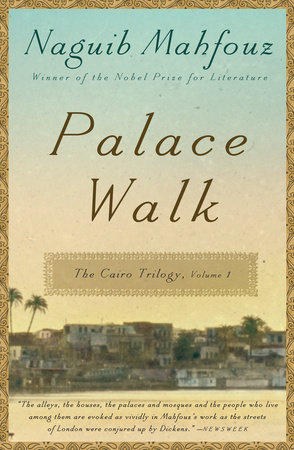 The questions and other material below are intended to enhance your group’s conversation about Nobel Prize winner Naguib Mahfouz’s Palace Walk.  The general questions that follow provide topics for further discussion of the trilogy as a whole.


1. What concrete details of daily life does Mahfouz describe in introducing the family?  What daily rituals are described?  What is the effect of this intimate, material presentation?

2. The women spend much of their time, when not engaged in housework, looking out at the street through the latticed screen on the house’s balcony.  Do they feel imprisoned or envious of the men in the family?  How do the women react to, and deal with, their highly traditional sexual and domestic roles?

3. How many important roles does Amina play in this family?  What is her strategy in dealing with her husband?  Is it difficult to identify with her?  Why or why not?

4. What is different or surprising about the rhythm of life for the al-Jawad family?  When are the men separated from the women, and when do they come together?  What are the important social moments of the day for the family?  Why is Kamal so sad when his two sisters leave the family home?

6. Considering that the spiritual ecstasy that Amina experiences at the mosque is a high point in her life, and that her injury causes her both physical pain and shame as the consequence of her disobedience, what do you think of the way her husband punishes her?  How does this episode deepen our sympathies with Amina and her children?  In what ways does Mahfouz emphasize the role of prayer and belief in the life of the family?

7. What are Yasin’s, Fahmy’s, and Kamal’s most notable qualities?  How do the sons compare with the daughters in terms of character?  Which members of the family are most likeable?

8. Aisha would have been happy to marry the police officer she had been watching each morning, but when Khalil Shawkat makes an offer, she readily agrees to marry him.  How much choice does she have in this matter?  What does she gain in marrying and leaving her father’s house?  What social function do wedding celebrations seem to perform?

9. Yasin is shocked to discover his father in Zubayda’s house, joyful, smiling, and playing music.  Why is he so pleased to see “a bit of his own soul and heart” (269) in his father?

10. After Yasin rapes his wife’s maid on the family’s rooftop (407-11), his wife Zaynab demands a divorce, which is then negotiated by her father and Al-Sayyid Ahmad.  Ahmad is enraged at his son, but mainly for not controlling his wife: “Let him get drunk, carouse, and take lovers, on condition that he remain the unchallenged master of his family” (438).  How are father and son alike?  What lessons about the power relations in marriage does Ahmad hope his sons will learn from his example?

11. What is the experience of being engaged in the story of a family whose lives are bound by a set of conventions and expectations very different from our own?  What is it like to judge the characters and events in this book, keeping in mind that ideals about individual freedoms are not wholly relevant in Mahfouz’s world?

12. Fahmy’s mother asks him to explain how he can endanger himself in the demonstrations.  When he retorts, “A people ruled by foreigners has no life,” Amina argues, “But we’re still alive, even though they’ve been ruling us for a long time…. Son, they don’t kill us and they don’t interfere with the mosques.  The community of Muhammad is still thriving” (374).  What does this exchange underscore about the values held by Fahmy, and those held by his mother?

13. On the day of Sa’d Zaghlul’s release from exile, Fahmy seeks his father’s forgiveness for participating in the demonstrations.  Al-Sayyid Ahmad is ambivalent; he has wanted his son to be safe, but says to himself, “Since God has allowed him to live to see this day, I wish he had done something important in it. By God, if you were young, you would have done much more than your son has” (521).  Given that Fahmy will be killed later on this very day, discuss the emotional conflict in both father and son between safety and patriotic action.  How does the narrative style on pages 522-528 put the reader in Fahmy’s position?

14. With the death of Fahmy, the political life of the nation has burst into the private home on Palace Walk.  His father had meant for his children “to be a breed apart, outside the framework of history.  He alone would set their course for them” (451).  What larger point is Mahfouz making about the intersection of history and the family?

15. Questions on the Cairo Trilogy (including Palace of Desire and Sugar Street)
1. The trilogy dramatizes the human quest for a sustaining belief—mainly through Kamal, but also through Khadija’s sons Abd and Ahmad al-Munim.  Kamal is in search of his own truth, and he struggles to break from the religious orthodoxy of his upbringing and to attain a more modern and Western intellectual life. Are any belief systems found to be sustaining for the characters in the trilogy?  Does Kamal eventually arrive at a satisfying intellectual, spiritual, or political position?

2.  In Palace of Desire, Kamal is obsessed with the worldly French-educated Aïda.  In a moment of illumination, he realizes that his father has created the model for his own masochism in love.  He speaks in his mind to his father: "Do you know what other consequences there were to loving you despite your tyranny? I loved another tyrant who was unfair to me for a long time, both to my face and behind my back. She oppressed me without ever loving me. In spite of all that, I worshipped her from the depths of my heart and still do. You’re as responsible for my love and torment as anyone else. In any case, Father, you're the one who made it easy for me to accept oppression through your continual tyranny."  In what other ways have the sons, daughters, and wife of ASA been warped by their relationship with Al-Sayyid Ahmad?

3. In the final chapter of Palace of Desire, while the husband and sons of Aisha are near death from typhoid, Yasin’s wife, Zanuba, goes into labor, and the newspaper announces the death of the political leader Saad Zaghlul.   What is Mahfouz expressing, in the trilogy, about his understanding of time, change and heredity?

4. Mahfouz’s women are very strong, whereas the men tend to be childish, self-indulgent, and relatively weak.  Compare the characters of Al-Sayyid Ahmad and his wife Amina, for example.  What does this contrast suggest about the family structure Mahfouz portrays?  How do cultural and familial assumptions about women and sexuality influence the romantic lives of Yasin and Jamal?  How do they think about and express their desires, and what, if anything do they have in common with their father in this regard?

5. Mahfouz was aligned with the first wave of support for the Wafd party, represented by Fahmy in Palace Walk.  He said, “Maybe my generation of intellectuals was the last one that really believed in democracy. . . . I was proud of our 1919 revolution and proud to be a Wafdist.  But the top priority of the revolution was not democracy; it was to get rid of foreign rule.  Egypt was the first country in our century to rise up against European occupation.  The people, led by the Wafd, ended the protectorate but failed to gain real independence, and, in any case, the Wafd did not know how to govern in a democracy.  Democracy is not deeply rooted in our culture.  Egyptians would make sacrifices for independence, but they did not value democracy, and so, step by step, our system fell apart. . . .  I believe that the blame really belongs to Britain’s colonialism and Egypt’s kings.  But, whoever was responsible, most Egyptians had concluded by the start of World War II that democracy offered nothing—not social justice, not freedom, not even full independence.  They laughed at democracy” (quoted in Weaver, 40).  How might Mahfouz have felt had he lived to see the wave of protests that took place in 2011, as well as the trial of Hosni Mubarak?