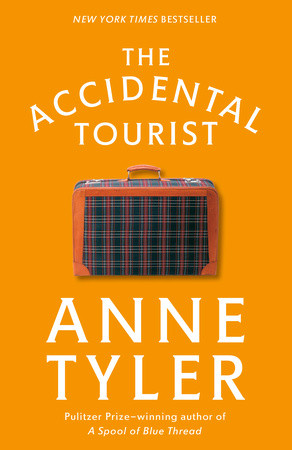 Would you characterize yourself as an accidental tourist in your
own life? Do you know anyone you might consider an accidental
tourist?

2. What kind of traveler are you? Would you find Macon's guides
helpful?

3. Macon has come up with a technique to avoid contact with others
on airplanes. Public transportation can lead to an awkward intimacy
with strangers. How do you handle such situations? Does
Macon's approach work for you?

4. There was no memorial service for Ethan in Baltimore. Whose
idea do you think that was? Do you agree with Garner, Macon's
neighbor, who chastises him for not having one?

5. Macon's style of mourning offends many people, including his
wife. Do their complaints have any merit?

6. According to Macon, "it was their immunity to time that made the
dead so heartbreaking." Discuss the meaning of this statement.

7. What is the significance of Macon and Susan's conversation about
Ethan? What do they each gain from it?

8. Why doesn't Macon repair his house after it is seriously damaged
by water?

9. The loss of a child can be devastating to a marriage. How do you
think a relationship survives such a cataclysmic event?

10. Macon believes he became a different person for Sarah. How
much do we change in the name of love? How much should we
change?

11. Do you think Sarah ever really understood Macon?

12. Macon realizes that while he and Sarah tried too hard to have a
child, once they had Ethan, it made their differences that much
more glaring. Do you think they would have remained together if
Ethan had lived?

13. Macon remarks that "he just didn't want to get involved" with
Muriel and her messy life, but somehow he has. Does this ring
true? Did Muriel simply overwhelm him?

15. Rose decides to love Julian despite her brothers' obvious disapproval.
What do you think drives her to make such a difficult
decision?

16. Julian describes Rose's retreat back to the Leary house as though
she'd worn herself a groove or something in that house of hers,
and she couldn't help swerving back into it. Do you think Rose
has made a mistake?

17. Do you find yourself as fascinated by the Learys as Julian is? Why
or why not?

18. When Rose declares that she and her siblings are the most conventional
people she knows, Macon cannot explain why he disagrees
with her. Can you?

19. Do you think the Learys' will ever purchase an answering
machine? Do you think Julian might slip one in the house?

20. Do you or does anyone you know suffer from geographic
dyslexia?

21. Why does Sarah return to Macon? Do you think they could have
worked it out or had they used each other up?

22. Macon does not think he has ever taken steps in his life and acted.
Do you think this insight is accurate, or is it a product of the helplessness
he feels in the wake of his son's death?

23. Do you think Macon has made the right decision in the end? Will
the relationship work out?

24. Do you think any of the couples in this novel stand a chance?

25. In the end, Macon comforts himself with the thought that perhaps
the dead age, and are part of the flow of time. Does this idea comfort
you?

26. If you could learn more about a particular character in this novel,
which would it be and why?

27. Would your group recommend this novel to other reading
groups? How does this novel compare to other works the group
has read?