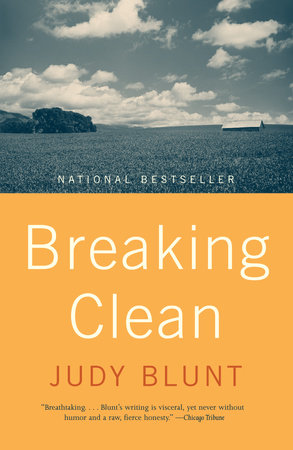 “Breathtaking. . . . Blunt’s writing is visceral, yet never without humor and a raw, fierce honesty.”
—Chicago Tribune

The introduction, discussion questions, suggestions for further reading, and author biography that follow are designed to enhance your group’s discussion of Judy Blunt’s Breaking Clean, a lyrical, painstakingly honest memoir about growing up on a Montana ranch. In writing about her family and the isolated community they call home, Blunt brings to life Montana’s glorious, wide-open spaces and the generosity of spirit that binds people together in times of need; but she also reveals the cruelties imposed by geography, distance, and weather, and by a society that remains, despite the strength and fortitude exhibited by generations of women, essentially a man’s world.


1. The first chapter of Breaking Clean offers a preview of Blunt’s story, touching on some of the major turning points in her life. In what ways do the descriptions of her mother [p. 5], the conversation between her father and John [pp. 6–7], and the account of the marriage counseling session [pp. 9–10] establish the framework for the autobiography as a whole? What insights does this chapter give you into the varied, often contradictory, emotions Blunt feels in telling her story? For example, in describing her impatience with her children, why does Blunt say, “For a moment I’m terrified I’ll slip and tell them to get tough” [p. 4]?

2. What does the account of Blunt’s family history [pp. 17–18] reveal about the values and ideals that shaped her character? What aspects of her family legacy are most apparent in Blunt?

3. Blunt’s description of the impact of the introduction of electricity to Phillips county in the late 1950s [pp. 25–28] offers an unusual perspective on what most of us think of as progress. How does it bring out the realities—both practical and philosophical—that set rural, isolated communities apart from mainstream America?

4. As ranchers and farmers, the Blunts and their neighbors are inextricably connected to cycles of the seasons and to the crops and cattle they raise. The devastating blizzard of 1964 [pp. 41–59] is a compelling instance of the negative impact of nature on their lives. How does Blunt use the storm to tell a larger story about the community? What lessons are implicit in her father’s reaction to the deaths of his cattle and how do they relate to Blunt’s description of his approach to ranching [p. 39]? How does the language and imagery she uses here and elsewhere in the book emphasize the intimacy between the ranchers and the land they live on?

5. Despite the isolation of her community, Blunt is exposed to situations that children anywhere might encounter in the course of growing up. How does Blunt bring to life both the personal and the more universal meanings of the unsettling afternoon she and her sister spend with their teacher [pp. 70–75] through her choice of detail and her tone?

6. In recounting her reactions to a Native American classmate, Blunt writes, “What I remember from that time is that, with all the inborn arrogance of a white child raised in a white man’s world, I thought well of myself for being kind to him. . . . There were so many things I knew without knowing why, things I learned as a child listening with half an ear to all that was said, and most intently to all that was not said” [pp. 84–85]. To what extent are “lessons of silence” an integral part of childhood?

7. Describing the onset of puberty, Blunt writes, “And when, in the inexorable process of time, my body betrayed me, my rage was terrible” [p. 97]. Why doesn’t she—or can’t she—turn to her mother for guidance and comfort during this difficult period?

8. “As a young ranch wife,” Blunt writes, “I wed my sixties-style feminism to a system of conflicting expectations and beliefs only slightly altered by a century of mute nobility. My brand of feminism celebrated strength through silence” [p. 154]. To what extent did Blunt succeed in melding the old-fashioned qualities of the “perfect” ranch wife with the ideals set forth by the feminist movement sweeping through the county in the 1960s? What impact did the circumstances of her life—her return to the community in which she grew up, her marriage to a man much older than she and the constant presence of her overbearing father-in-law—have on her ability to become an independent woman? How did her attachment to the land and her genuine admiration for the strong women in the community influence the life she created for herself and her family?

9. One of the things Blunt objects to most strenuously is that few women inherit the ranches and farms they grow up on. The rugged, independent rancher, however, was already disappearing when she was in high school and she acknowledges that “the place I grew up on had fallen under the wheels of big business—big land, big lease, big machine. Big debt” [p. 203]. Would Blunt have found a satisfactory place for herself as the owner of a twenty-first-century ranching business?

10. The contrast between the lives of men and women is a major theme of Breaking Clean. Early in the book, Blunt writes, “I could ride and jockey a John Deere as well as my brothers, but being female, I also learned to bake bread and can vegetables and reserve my opinions when the men were talking” [p. 4]. Was her childhood merely a preparation for becoming a ranch wife or did it help her develop qualities that would serve her well as an adult in general? In what ways did her childhood experiences and the traditions with which she grew up enhance her ability to make it on her own?

11. “Eventually I would come to understand that the rules and roles I fought were less about me than they were about my place, this piece of earth that I came to identify with as clearly as I did my family” [pp. 107–108]. To what extent was the environment Blunt grew up in shaped by a vision of the West that is deeply imbedded in American mythology? What particular elements or events in Blunt’s story belie the romantic image of cowboys and ranchers as a special breed, driven not by the profit motive but by “deeper, more soul-sustaining reasons, like freedom and autonomy” [p. 293]? Are men as well as women victims of the out-dated assumptions about life in the wide-open spaces of the West?

12. How would you characterize the tone of Breaking Clean? Are you sympathetic to Blunt’s point of view throughout? How successful is Blunt in relating the viewpoints of the people around her? Is Blunt’s admission that “although my memories are real, my interpretation of them is less trustworthy” [p. 33] equally applicable to all memoirs?

13. The memoirs of writers often reveal, either implicitly or explicitly, the forces that led them to become writers. What were the major influences on Blunt’s artistic development and her interest in storytelling? Did she need to exile herself from the world she grew up in to find her own voice?