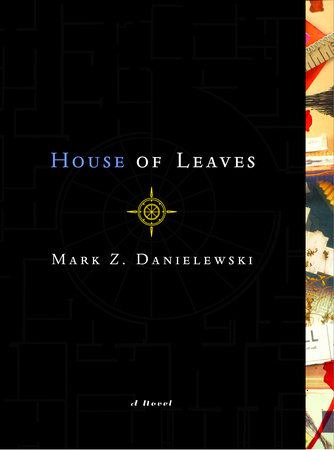 The questions, author biography, and suggested reading that follow are intended to enhance your group’s reading and discussion of Mark Z. Danielewski’s House of Leaves. We hope they will provide you with a variety of ways of thinking and talking about this truly challenging and extraordinary book.


1) How did you read the book? Page by page? Zampanò’s text, then Truant’s? What was your reaction to trying to navigate through the book? Confusion? Frustration? Claustrophobia? Terror? Intrigue? How does the form of the novel affect and reflect the emotional and narrative content of the book? How does the experience of reading House of Leaves mirror the experience of the various characters in the novel? In what way (if any) does the reader (and the author, Danielewski) act as a character in the book?

2) What are we to make of Truant’s claim, made early on (p.xx), that everything we are about to read is false? —the movie does not exist, the house does not exist, even many of the references sited in the footnotes do not exist. Is there anything in the book that we know is real, and more essentially, what does “real” mean in the context of a novel / this novel? Does any one of the major characters in the novel even necessarily exist? Zampanò? Truant (the editors point out that they have never met Truant in the flesh (p.4))? Truant’s mother? Navidson? And if the contents of Zampanò’s scrapbook are false, why would any one of the characters imagine not only the documentary The Navidson Record but create fictional evidence, scholarship and commentary of that documentary? How is the answer different when this question is applied to Danielewski, the actual author of House of Leaves?

4) Asked to briefly describe House of Leaves, Danielewski has said in an interview that he “likes to look at House of Leaves as a three-character play: a blind old man, a young man, and a very special, extraordinarily gifted woman.” Who is the “extraordinarily gifted woman” in the novel? What are her gifts? Is her role truly as central as the obviously integral roles played by the “blind old man” and the “young man”?

6) Why does Johnny Truant become so consumed by Zampanò’s manuscript? What in particular enthralls him so much – the house? The Navidson Record? The manuscript itself?

7) The myth of Theseus and the Minotaur is referenced frequently throughout the book both explicitly and implicitly. In fact, Zampanò has attempted to obliterate all references to Minos and the Minotaur within the text. Truant meanwhile tries to “resurrect” most of these passages (p.111) and later dreams that he is a Minotaur hunted by a drunken frat boy (p.403-406). What is the significance of the Minotaur to the novel? Why does Zampanò cross out all references? And why does Truant then reconstruct them? Another element of the Theseus myth that features prominently is the labyrinth. How does the labyrinth function in the myth? In House of Leaves?

8) One of the major elements of the book’s layout is the use of different fonts. What fonts are used and how are they significant? For instance, Johhny’s text appears in Courier—in what way does Johhny himself act as a “courier”?

9) On page 320, Zampanò appears to have written a typo—“He (Tom) might have spent all night drinking had exhaustion not caught up with me.” Should the “me” be “him”? Why doesn’t Truant point this out as a typo, or is this another one of Truant’s “additions” to The Navidson Record? Is it possible that Zampanò was actually a member of the Navidson family?

10) What are some of the ways that the novel defines and explores the concept of space? In what ways is this concept distorted? How does space change physically, in the house; literally, in the layout of the novel itself; and psychically, in the minds of the characters and between the characters? How do these various spatial changes relate to each other?

12) Much of the scholarship and commentary on The Navidson Record notes the vaginal quality of the house (for example, the footnote on page 358). In what ways is the house vaginal and/or feminine? How does the consumptive femininity of the house relate to Truant’s (and Navidson’s) dysfunctional relations with the opposite sex? And how are the various female characters throughout the novel presented? Is the novel full of strong women or exploited women? Or both?

13) What are we to make of the death of the baby on pages 518-521, which is the last time we hear from Truant and the only time Truant tells us anything completely in third person? How does this story relate to the Minotaur? Whose baby is it? Could the baby be Truant? What does the passage suggest about Truant’s mother locked away inside “The Whale”?

14) What can we tell about Truant’s relationship with his insane mother, Pelefina Heather Lievre, especially from looking at the Whalestoe Institute Letters? Does she have any relationship to Zampanò? Navidson? Karen? On page 615, one can read the encoded line: “Dear Zampanò, Who did you lose?” This is found in the passage that follows if you take the first letter of each word, spelling “&:” as “and”: …destroyed. Endless arrangements—re: Zealous accommodations, medical prescriptions, & needless other wonders, however obvious—debilitating in deed; you ought understand—letting occur such evil?” Who did Zampanò lose? Why would Truant’s mother ask?

16) One of the centerpieces of the novel is a film, and Danielewski has said that film and film criticism were a (if not, the) major influence on the writing of the novel. In what ways would you describe the book as “cinematic”? How is the language of film (high angle, low angle, jump cut, pan, etc.) used in the text and reflected in the scenes chosen and in the layout? Going further, the novel contains references to the work of Fellini (for example, Zampanò shares his name with a character in the film, La Strada). What are the film allusions in the book and how do they inform the story?

17) Danielewski’s sister is the rock singer POE and her album, Haunted, serves, in many ways, as a companion piece to House of Leaves (and vice versa). How do the album and the novel echo, mirror, and distort each other? How does the song “5-Minute Hallway” reflect the themes in the book? How about the two versions of “Hey Pretty”?

19) The House of Leaves has been published in various editions, including the web edition, the US hardcover, the US softcover, the UK edition, etc. These editions have been different in a number of ways (see “A Note On This Edition” on the copyright page for descriptions of some of these differences). What does the existence of these various editions suggest? More specifically, what do their variations mean?

20) What is the significance of the blue type in the book? In what various ways and to what effect is the blue type used? Why “blue”? And very specifically, why does the word “house” always appear in blue?