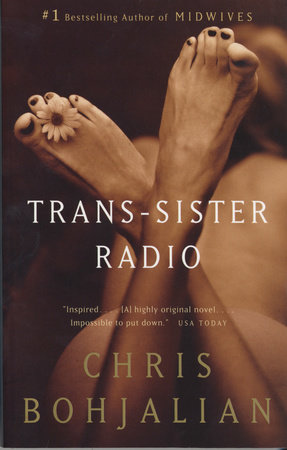 The introduction, discussion questions, author biography, and suggested reading list that follow are designed to enhance your group's reading of Chris Bohjalian's Trans-Sister Radio, a uniquely powerful love story with more than a few unexpected twists.


1. What stereotypes or common misconceptions about transsexuals does Trans-Sister Radio challenge? How is it able to reveal the reality beneath the stereotypes?

2. Trans-Sister Radio is alternately narrated by Carly, Will, Allison, and Dana. What effect does Bohjalian achieve by telling the story through four narrators rather than one? How do these differing perspectives shape and control our reactions to the story?

3. As he contemplates Dana's surgery, Will asserts, "You simply couldn't, it seemed to me, change a biological imperative" [p. 143], while Dana says that being born in a man's body was a "howling chromosomal error" [p. 48]. Does the novel seem to favor either of these points of view? Is it possible for chromosomes to make an "error"? Is there a "biological imperative" that determines gender? What ethical and social dilemmas arise with our increasing scientific ability to manipulate nature?

4. Why do Dana's parents oppose his sex-change surgery? What aspects of Dana's becoming a woman concern them most? What prevents them from understanding Dana's deeper need to become a woman?

5. After Dana's reassignment surgery, she visits a young woman who is about to undergo the same procedure and is racked with worry about how her father, a football coach and mountain climber, will react. Dana tells her: "He hasn't climbed a mountain anywhere near as tall as the one you have to get here. Never in his life has he done anything as difficult as you have. Never" [p. 209]. What are the difficulties--emotional, practical, social--Dana and other transsexuals must confront? In what ways does the novel take readers inside those struggles?

6. Why does a large part of the Bartlett community object to Allison living with a transsexual? Why do even liberal parents, who at least theoretically have no objection to gay marriage, draw the line at transsexualism? Are their fears understandable and justifiable? What are they based on?

7. Sally Warwick, Allison's eleven-year-old student who masterminds the class's cross-dressing curtain call, explains that she got one of the boys to go along with her plan because he had a crush on her. "You see, when you think someone's cute, you do really weird stuff" [p. 297]. In what ways is this statement a commentary on the novel as a whole? What does it suggest about the nature of love? Why is Sally's innocent perspective on cross-dressing especially disarming?

8. In discussing transsexualism with her mother, Carly says, "we all want to cross over a lot more than we realize. We all want to be . . . other" [p. 272]. Is she right? Why would we want to be something "other" than what we are?

9. How does Will go from being a person who regards Dana as "not normal" and sex-change surgery as a mutilation, to someone who not only accepts Dana but falls in love with her? What are the stages in this process? What moments draw him closer to Dana?

10. Looking back on their relationship, Allison feels she has been used by Dana: "She'd needed someone to take care of her during transition, she'd needed a woman to tutor her in the finer points of my gender. She'd seen the way I'd fallen in love with her when she was my male professor, and taken advantage of me" [p. 312]. Is Allison right about Dana's motives? Has Dana deliberately deceived and manipulated her? Why doesn't he tell her of his plans at the beginning of their relationship?

11. The airing of the VPR interviews with Dana, Allison, and their opponents is a turning point for everyone in the novel. What effect does this program have on Dana and Allison's relationship? On Will? On those who consider Dana a "pervert"? What is the novel suggesting about the role of information in changing public opinion about sexual and gender issues?

12. Near the end of the novel, Carly seems to endorse a complete sexual relativism, where gender and sexual preference don't matter at all: "Let's face it: In reality, it's all just about muscle spasms that feel really good" [p. 341]. Is this an accurate view of human sexuality? To what extent does socialization determine sexual preference and gender behavior? Is Carly's thinking liberating or does it open the door to a confusing sexual free-for-all?

13. Dana undergoes a sex-change operation, but in fact all of the main characters in Trans-Sister Radio experience important changes. In what ways are Will, Allison, and Carly different at the end of the novel than they were at the beginning?

14. When Glenn Frazier confronts Allison with the parents' concerns, Allison says, "Who lives with me is none of Richard Lessard's business." Glenn replies, "That's not true. You teach his daughter. He pays your salary" [p. 115]. To what extent do these opposing positions mask larger anxieties--about privacy, sexuality, education, morality--in America today?