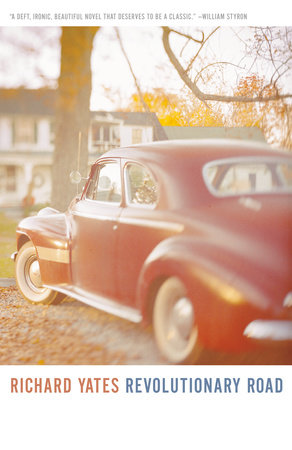 “A deft, ironic, beautiful novel that deserves to be a classic.”
—William Styron

The introduction, questions, and suggestions for further reading that follow are designed to enhance your group's discussion of Richard Yates's acclaimed 1961 novel, Revolutionary Road.


1. What is the significance of the novel's title, Revolutionary Road? In what ways might it be read as an ironic commentary on mid-twentieth century American values?

2. Why does Yates begin the novel with the story of the play? In what ways does it set up some of the themes—disillusionment, self-deception, play-acting, etc.—that are developed throughout the novel?

3. Frank rails about the middle-class complacency of his neighbors in the Revolutionary Hill Estates. “It's as if everybody'd made this tacit agreement to live in a state of total self-deception. The hell with reality! Let's have a whole bunch of cute little winding roads and cute little houses painted white and pink and baby blue; let's all be good consumers and have a lot of Togetherness and bring our children up in a bath of sentimentality . . . and if old reality ever does pop out and say Boo we'll all get busy and pretend it never happened” [pp. 68-69]. Is Frank's critique of suburbia accurate? In what ways does Frank himself live in a state of self-deception? Why can he see so clearly the self-deception of others but not his own?

4. What ironies are involved in Frank going to work for the same firm his father worked for? What is Frank's attitude toward his job and the fact that he's walking in his father's footsteps?

5. Describing a Negro couple holding hands at the mental hospital where John Givings has been confined, the narrator writes that “it wasn't easy to identify the man as a patient until you noticed that his other hand was holding the chromium leg of the table in a yellow-knuckled grip of desperation, as if it were the rail of a heaving ship” [p. 296]. What do such precise and vivid physical descriptions—often highly metaphorical—add to the texture of the novel? Where else does Yates use such descriptions to reveal a character's emotional state?

6. Revolutionary Road frequently—and seamlessly—moves between past and present, as characters drift in and out of reveries. (April's childhood memory [pp. 321-326] is a good example). What narrative purpose do these reveries serve? How do they deepen the reader's understanding of the inner lives of the main characters?

7. What roles do Frank's affair with Maureen and April's sexual encounter with Shep play in the outcome of the novel? Are they equivalent? What different motivations draw Frank and April to commit adultery?

8. Twice Frank talks April out of an abortion, and both times he later regrets having done so, admitting that he didn't want the children any more than she did. What motivates him to argue so passionately against April aborting her pregnancies? What methods does he use to persuade her? Is John Givings right in suggesting that it's the only way he can prove his manhood?

9. What role does John Givings play in the novel? Why is he such an important character, even though he appears in only two scenes? How does he move the action along?

10. How do Frank and April feel about Shep and Milly Campbell? What do they reveal about themselves in their attitudes toward their closest friends?

11. Before she gives herself a miscarriage, April leaves a note telling Frank not to blame himself if anything should happen to her. But is he to blame for April's death? Why, and to what extent, might he be responsible?

13. What is Yates suggesting by the fact that the only character in the novel who sees and speaks the truth has been confined to an insane asylum? Does John Givings's‚ outsider status give him the freedom to speak the truth, or has his natural tendency toward telling the truth, however unpleasant it might be, landed him in a mental hospital?

14. Near the end of the novel, the narrator says of Nancy Brace, as she listens to Milly's retelling of April's death: “She liked her stories neat, with points, and she clearly felt there were too many loose ends in this one” [p. 345]. What is the problem with wanting stories to be “neat”? In what ways does Revolutionary Road circumvent this kind of overly tidy or moralistic reading? Does the novel itself present too many “loose ends”?

15. The novel ends with Mrs. Givings chattering on to her husband about how “irresponsible” and “unwholesome” the Wheelers were. What is the significance, for the novel as a whole, of the final sentences: “But from there on Howard Givings heard only a welcome, thunderous sea of silence. He had turned off his hearing aid”? [p. 355]. What symbolic value might be assigned to the plant that Mrs. Givings mentions at the end of the novel?