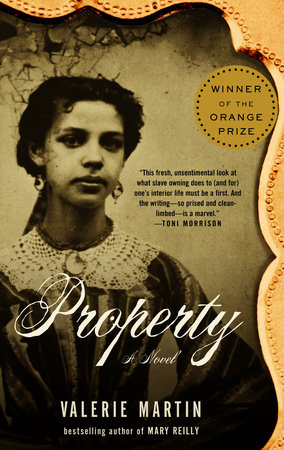 Winner of the Orange Prize

“This fresh, unsentimental look at what slave owning does to (and for) one’s interior life must be a first. And the writing—so prised and clean-limbed—is a marvel.” —Toni Morrison

The introduction, discussion questions, suggested reading list, and author biography that follow are intended to enhance your group’s reading of Valerie Martin’s Property, groundbreaking fiction selected by the international Orange Prize committee as the best novel of the year by a woman writing in English.


1. How does Property differ from such long-time favorite novels of the South as Gone With the Wind?

2. In the early pages of the novel, Manon treasures the memory of her father and of his fairness to their slaves. Yet over the course of the novel, she changes her mind, rejecting him so fiercely that she turns his picture face down and calls him a hypocrite [p. 182]. What psychological progression leads to Manon’s change of heart?

3. Manon remembers her father telling her that “Religion was for the Negroes . . . it was their solace and consolation, as they were ours” [p. 22]. Discuss Manon’s relationship to the religious convictions that were the sources of pro- and anti- slavery movements in both North and South.

4. In what sense is Sarah an alter ego or “double” for Manon?

5. When Manon is in her husband’s control, one might say she is something of a slave herself. Yet once she is free, her sense of injustice and victimization persist. What explains that, and how does it relate to other historical situations involving the oppression of one group by another?

6. Manon speaks of a lie, “the lie at the center of everything, the great lie we all supported, tended and worshipped as if our lives depended upon it” [p. 179]. Manon claims that it is this lie that has turned her heart to stone, and not, as her aunt maintains, the burden of her childlessness. What is the lie?

7. Babies and the act of nursing figure in several scenes in the novel. Recalling how white infants were nursed by slaves, Manon muses, “Perhaps that was how the poison entered us all” [p. 180]. What is the poison?

8. One of the most dramatic sections in the novel is the story of Sarah’s escape. Why does the author relate these events not from Sarah’s point of view but as a story told to Manon third-hand?

9. At the end of the novel, Mr. Roget, a free black man and New Orleans artisan, steps forward and offers to purchase Sarah and Walter from Manon. She refuses, speaking of a bit of white plaster that falls from his suit to the carpet as enraging her and sealing his fate. [p. 170]. Why does she refuse his offer, and what is the significance of the plaster?

10. How does Manon view Walter at the end of Property? What do you imagine will become of him?

11. What is the significance of the spyglass at the opening of the novel, and of the first-person narrative voice the author uses?