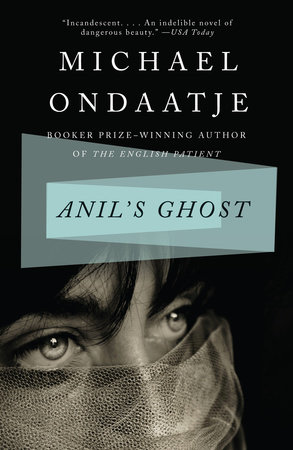 The questions, discussion topics, and suggested reading list that follow are intended to enhance your group's reading and discussion of Michael Ondaatje's Anil's Ghost, his first novel since the internationally acclaimed and Booker Prize winner The English Patient. A literary spellbinder which unfolds against the deeply evocative background of Sri Lanka's landscape and ancient civilization, Anil's Ghost is a story about love, family, identity, the unknown enemy, and the quest to unlock the hidden past--a powerful story propelled by a riveting mystery.


1. Juxtapositions and fragments are central to the style and structure of Anil's Ghost. The novel opens with a scene in italics, in which we are introduced to Anil as part of a team of scientists unearthing the bodies of missing people in Guatemala. Then there is a brief scene in which Anil arrives in Sri Lanka to begin her investigation for the human rights group. This is followed by another scene in italics, describing "the place of a complete crime"--a place where Buddhist cave sculptures were "cut out of the walls with axes and saws" [p. 12]. How do these sections--upon which the author does not comment--work together, and what is the cumulative effect of such brief scenes?

2. Why is the story of how Anil got her name [pp. 67-8] important to the construction of her character? Does it imply that she has created an identity for herself, based on fierce internal promptings, that is at odds with her parents' wishes for her? Is Anil's personality well-suited to the conditions in which she finds herself in Sri Lanka?

3. Forensic expertise such as Anil's often occupies a central place in the mystery genre--as in the popular Kay Scarpetta mysteries by Patricia Cornwell or in the Sherlock Holmes stories by Sir Arthur Conan Doyle. In what ways does Anil's Ghost fit into the genre of mystery fiction, and how does it transcend such a classification?

4. How does the section called "The Grove of Ascetics" extend the novel's exploration of the meaning of history? What is the relevance, if any, of Palipana's knowledge? How does the ancient culture of the island relate to its present situation? Does the past have permanence?

5. If you have read The English Patient, how does Anil's Ghost compare with that novel? Is it similar, with its focus on war, on history, on how people behave in dangerous political situations--or is it quite different?

6. What does Anil's affair with Cullis, as well as what we learn about her marriage, tell us about her passion and her sensuality? Given her past, is it surprising that there is no romantic involvement for her in this story?

7. Michael Ondaatje has published many books of poetry; how do the style and structure of this novel exhibit the poetic sensibility of its author?

8. Is there a single or multiple meaning behind the "ghost" of the book's title? Who or what is Anil's Ghost?

9. Why are Anil, Sarath, and Gamini so consumed by their work? What parts of their lives are they necessarily displacing or postponing for the sake of their work? Is the choice of professional over personal life the correct one, ethically speaking, within the terms of this novel?

10. Does the story of Gamini's childhood provide an adequate explanation for the rivalry between him and Sarath? Or is the rivalry caused solely by the fact that as adults they both loved the same woman? Does Sarath's wife love Gamini rather than her husband? Which of the two brothers is the more admirable one?

11. As Anil thinks about the mystery of Sailor's death, the narrator tells us, "She used to believe that meaning allowed a person a door to escape grief and fear. But she saw that those who were slammed and stained by violence lost the power of language and logic" [p. 55]. How does this insight about the loss of language and logic explain Ananda's behavior? Is Anil's search for "meaning" ultimately to be seen as naive within a context which, as the narrator tells us, "The reason for war was war" [p. 43]?

12. The acknowledgments at the end of the book tell us that the names of people who disappeared (mentioned on p. 41) are taken from an actual list in Amnesty International reports (see p. 310). Similarly, the description of the assassination of the president [pp. 291-95] is based on true events, though the president's name has been changed. Why does Ondaatje insert the names of real people, and the real situations in which they died or disappeared, in a work of fiction?

13. Certain tersely narrated episodes convey the terrifying strangeness of Sri Lanka's murderous atmosphere. About the bicycle incident he witnessed, in which the person being kidnapped was forced to embrace his captor as he was taken away, Sarath says, "It was this necessary intimacy that was disturbing" [p. 154]. Another scene describes Anil and Sarath's rescue of the crucified Gunesena; another the disappearance of Ananda's wife. How does Ondaatje's handling of these three separate examples of violence and its victims make the reader understand the horror of living with politically-motivated murder as an everyday reality?

14. What are the elements that give such emotional power to the scene in which Gamini examines and tends to the body of his murdered brother?

15. Given the crisis that occurs when Anil testifies about Sailor at the hospital, has she brought about more harm than good? If so, is she ultimately to be seen as an outsider who has intruded in a situation she doesn't fully understand? Is Sarath the true hero of the novel, and does he sacrifice his life for hers?

16. The novel ends with a chapter called "Distance," in which a vandalized statue of Buddha is reconstructed and Ananda, the artisan, is given the task of sculpting the god's eyes. Does this religious ceremony cast the novel's ending in a positive or hopeful light? How important is the theme of Buddhism, and the presence of the Buddha's gaze, throughout this story?

17. How does Ondaatje manage to convey a powerful sense of place in this novel? What are the details that communicate Sri Lanka's unique geographical and cultural identity?